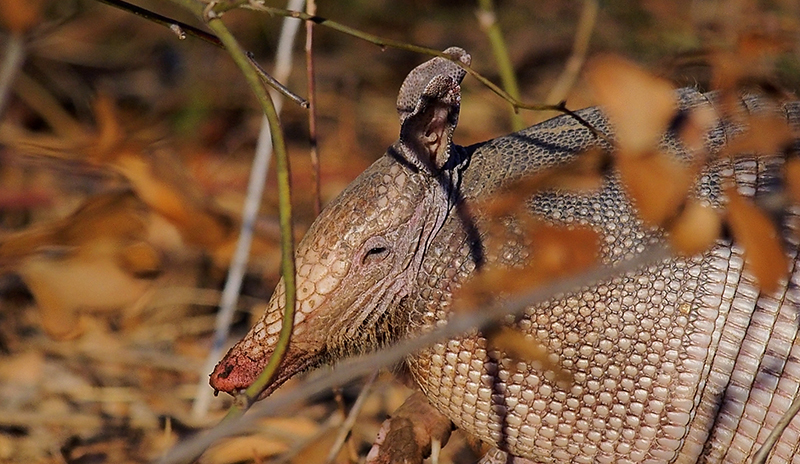 “Good grief that’s a lot of racket,” I thought while sitting in the large hickory tree that just happened to grow in the perfect spot to cover this deery-looking funnel with my bow. My first thought was turkeys. The big birds are notorious for raising a ruckus as they rake leaves in search of hidden mast and invertebrates. But the sound wasn’t moving much, and turkeys cover some ground in their foraging. This was something else.
After a few minutes of trying to figure it out, I chose to ignore it. Or rather, I tried to ignore it. Half an hour later, I thought I was going to go crazy as I mumbled, “what the heck is over there?” Finally, I caught a glimpse of the small, pinkish- brown animal responsible. The critter shuffled through the leaves, followed that with frantic digging and then plunged its conical head into the forest duff before quickly moving to a fresh prospecting area a few feet away. This went on for an hour or more, and the snuffling beast covered an area about the size of my truck. The animal was an armadillo.
This incident took place years ago. Nowadays, I can identify the sounds of a rambling armadillo within a few seconds. For a relatively non-vocal animal, they make a lot of noise. The noise comes from searching for food.
Related to anteaters and sloths, armadillos are opportunistic feeders munching mostly on invertebrates like grubs, wasps, fire ants and scorpions. They do eat an occasional bird egg, reptile or amphibian. And every now and then they eat vegetable or fungal matter. Because they do so little chewing, they’re peg shaped molars have no enamel. The armadillo has a good sense of smell; I’ve been busted several times by a shifting wind as I tried to sneak in for good photo opportunities. Their eyesight, however, is  poor. The picture with this column  was taken from less than 10 feet, but downwind of course.
Armadillos are nocturnal. If you want to see an armadillo in the daylight, winter is the best time of year. They seem to come out of the woodwork during cold days. This is because they have almost no body fat and a relatively low metabolic rate, which means they’re constantly eating to stay alive. Keeping the furnace stoked turns into a full-time job as the temperatures plummet.
Armadillo is a Spanish word meaning “little armored one,” and the leathery hide is good protection from brush and briars as the armadillo runs away from predators at up to 30 mph. But sadly, it can’t hold up to an F-150 or other motorized vehicles. To make matters worse, the armadillo has a tendency to jump straight up when startled. Not a good strategy for survival on the road.
Armadillo moms give birth to identical quadruplets – the only mammal known to do this. All young are from the same egg and even develop in the same placenta.
There are so many interesting facts about the armadillo that even without its armor plating it would be among the most unique of animals. Armadillos can hold their breath for up to six minutes. They can walk across the bottom of creeks and other bodies of water, but they can also float by gulping air to inflate their intestines. Armadillos can also carry leprosy, but transmission to humans is rare.
The nine-banded armadillo is the only species of armadillo found in the United States.  It’s a southern species that has gradually increased its range, and has been spotted as far north as Nebraska.