Once a Hotel, Now a Local Landmark 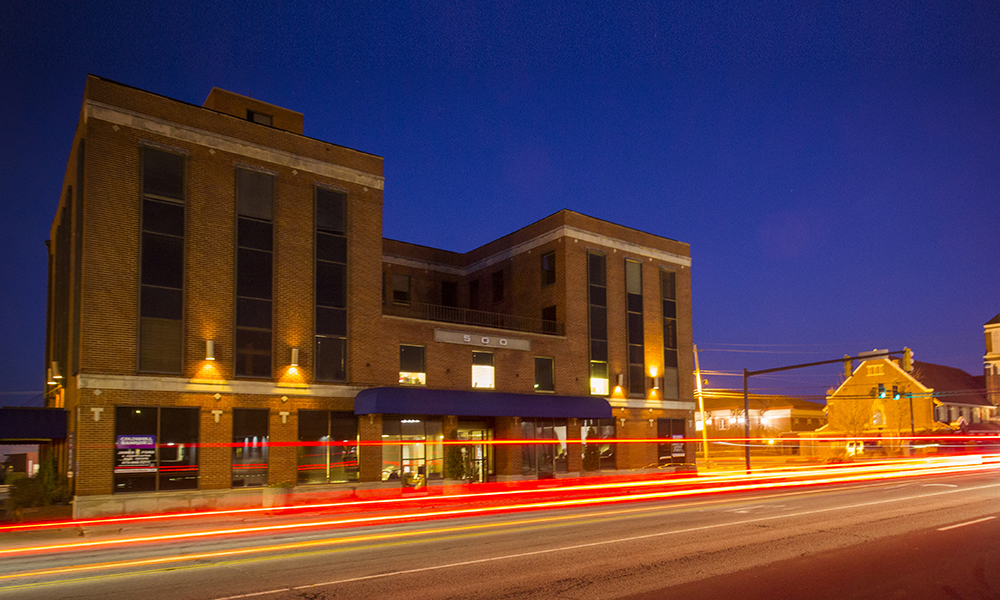 It’s a beautiful summer day in 1927.  From the lobby of the hotel you can hear the train whistle as it departs the depot after dropping off a few travel weary passengers.  Many of these passengers are traveling salesman making their bi-monthly stop in Russellville Arkansas to display their wares in hopes of selling to local retailers.  They walk a couple blocks southwest and check in at the newest, and one of the finest, hotels around — The Hotel Pearson.
Located in the Land of a Million Smiles in the Hills of a Million Thrills according to their advertising postcards, The Hotel Pearson was built by Evelyn Pearson and her partner Mr. Mortenson in 1926.  Having been partners in the hotel business in Texas from 1924 to 1926, the partners sold their interests in the Texas properties and moved to Russellville. Pressing claims of creditors from the Texas partnership forced them to reevaluate their business, so they refinanced the hotel building and formed a corporation over the partnerships assets in 1927, thus creating the “Pearson Hotel Company” for which Mrs. Pearson was the major shareholder.  Many creditors then took preferred stock in the corporation in lieu of their claims of debt.  Mrs. Pearson served as the manager until the hotel closed its doors and the building was sold to a group of investors in 1965.
The hotel was built while there was still a 2,208 foot pontoon bridge across the Arkansas River.  Leonard’s Hardware, formerly the Patrick-Leonard Hardware and Furniture Store, was already 25 years old and was located at 118 North Commerce. Thomas Jefferson Terral was the governor of Arkansas and Calvin Coolidge was President of the United States.  Route 66 was created as the most scenic trip across the U.S. and Henry Ford announced the 40 hour work week.
The partners had chosen a prime location.  Halfway between Fort Smith and Little Rock, and approximately 64 miles from Hot Springs, the hotel was perfectly located near the railroad and the Arkansas River so it could serve patrons from all walks of life. They served locals in the diner and coffee shop daily in addition to travelers.  The hotel served as a meeting place for many local civic groups including the Rotary Club. The lobby entrance was located in the front of the building on West Main Street.   In 1941 you could spend $1.00 to $3.00, depending on room size, for a good night’s rest and a great meal at a hotel known for its service.  The hotel advertisements boasted free parking, elevator, television, air conditioning and most notably the safety of the buildings structure itself. The floors, walls and ceilings were built using concrete, thus making the structure fireproof.  To the west of the building in what is now the parking lot, stood a vegetable garden for use in the kitchen, and in the alleyway were pigeon cages.  An artesian well still exists in the basement of the building.
The building was designed in such a way that a 5th floor could be added in the future if needed.  It still stands as the original four story structure, although it has seen much renovation over the years.
In 1965, the building was sold to a group of investors and converted into an office building.  James R. Ford and his business partners acquired the building around 1976, and Mr. Ford retains ownership of the building today.
I had the pleasure of visiting with Mr. Ford in his 2nd floor office today and as I looked out the window over the parking lot and West Main Street I couldn’t help but imagine myself taken back in time.  I imagined much less traffic, on a street much narrower than it is today.  I could almost see the large kitchen garden, with ladies busy harvesting vegetables for the day’s menu. We spoke of the history of this grand old building as if it all happened yesterday.  Mr. Ford remembers attending Rotary Club meetings in the dining room of the Hotel Pearson and having coffee with friends in the lobby.  He remembers the meat packing plant just west of the building and the restaurant and retail stores just a few more blocks west.  Just northeast, in what we call downtown, the Deluxe Hotel sat in the building that houses Opal Mae’s Café today.
When he and his partners purchased the building, it housed offices for Army and Navy Recruiters, Johnny Harris Attorney at Law, and the telephone company occupied the 3rd and 4th floors.  Throughout the years, many renters have come and gone. There have been healthcare providers, psychiatrists, appraisal services and attorneys among the many other business offices that have called this building home.  There have also been several renovations, all designed to keep the building in good condition to ensure it lasts for many years to come.
At 89 years old, this building stands as one of our most beloved local historical landmarks. Next time you’re in the area, stop by just to see the historical items in the glass case on the first floor.  There is an old hotel room key, various postcards from the hotel, and even drinking glasses from the hotel diner. Stop in and have a look, you’ll be glad you did.