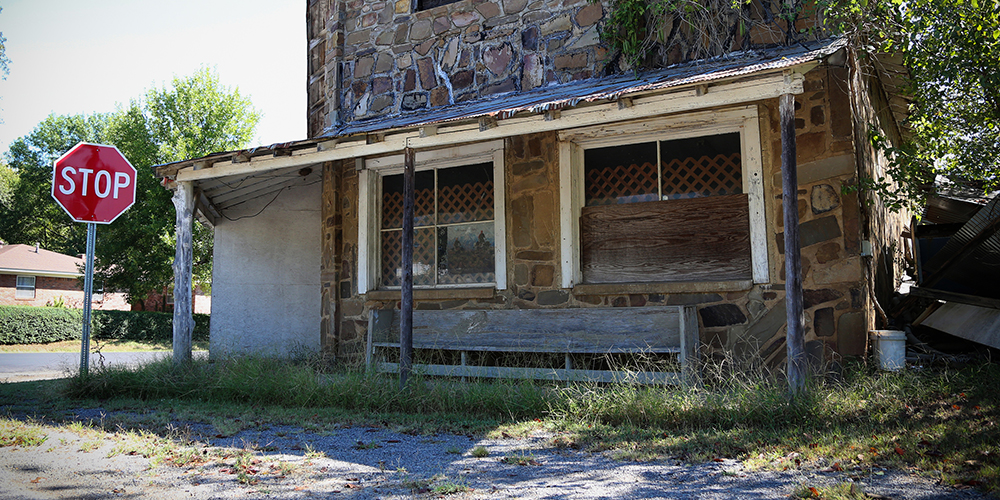 Story by Billy Reader
Along the side of a highway that you’ve probably never traveled there sits an old stone building. It was built before the road was paved and it was built strong. It was small because it fit the place in which it lived. It was a place of community. It was a place for lost souls and where men gathered to tell their tales.
It was there, sitting on an old church pew, that I got the education that every boy should get. How to spit. How to cuss. And how to tell a good lie.
Will Human ran The Human Store in the shadow of the Ouachita Mountains for as long as I could remember. It was every bit the type of old country store that nostalgia is made from.  Will could almost always be found sitting in his rocking chair in the back watching one of the stacks of VHS movies he’d rented that week and smoking a cigarette. There was no air conditioning, just a chicken house fan running during the summers, a stove for the winters and a hand written sign taped to the wall that said, “No betting on Texas games.”
It was here that we would venture to get a Coke when the summer’s heat needed escaping or to air up a tire with the ancient air compressor that sat on the wrap around porch. It was here that we would get our picture taken when we checked a deer and flip through Will’s stack of photos of other hunters’ kills. It was here that I was dropped off by the school bus and would weed the garden out back in exchange for a coke and a candy bar until somebody came to pick me up.
And it was here that on most afternoons you could find old men sitting along an old bench simply being old men. They were old farmers and old carpenters and loggers. Men who lived life using their brains and their well-worn hands. And now, apart from piddling around, most had traded hard labor for quiet days in the company of their neighbors.
The bench was an old church pew, probably oak, worn from the weather and denim overalls. I’m not sure where it came from or what still held it together besides determination, rusted nails and the hope for another story. But whatever it was, time had turned that old pew into a bona fide, no fooling, sure enough liars’ bench and cemented its place in my soul.
Day after day they would gather telling jokes and stories, philosophizing on younger days and the sins of youth, often with more fondness than remorse. I remember vividly realizing that every single one of them were missing at least one finger and occasionally the missing digits would come up in conversation. Sometimes the story of how they lost it would change from the last time they told me. Once I was taught that if I ever lost a finger of my own to make sure it got wrapped up good before I buried it. Otherwise the ants would get on it and cause an itch that simply couldn’t be scratched unless you dug it up.
It was to this bench that I snuck late one night to use the pay phone to make a long distance call to a blonde-headed girl that my parents didn’t know about. It was on this bench that I professed my love to her as long as my quarters held out. It was alongside these old men that a boy grew into adolescence. And while the church pew I occupied on Sundays taught me about the good Lord in heaven, the pew I occupied the rest of the week taught me much about living a good life on earth.
It was by the liars’ bench that I passed as I left for college and though I stopped back by every now and then, time has a way of speeding up once you turn 18.
Eventually, Will got too old to manage the store and closed it down. A piece of local history gone. And one by one, all of those old men returned to the earth that they’d spent their lives working. As the years crept by the building began to fade, and is now simply sitting as a shell of its former self along the side of a road you’ve probably never traveled.
But on the porch there still sits an old church pew. Empty and covered with dust, waiting for its old men to come home. Waiting for their stories. Waiting for their laughter. Waiting for a young boy to take his place beside them and learn what it means to be a man.