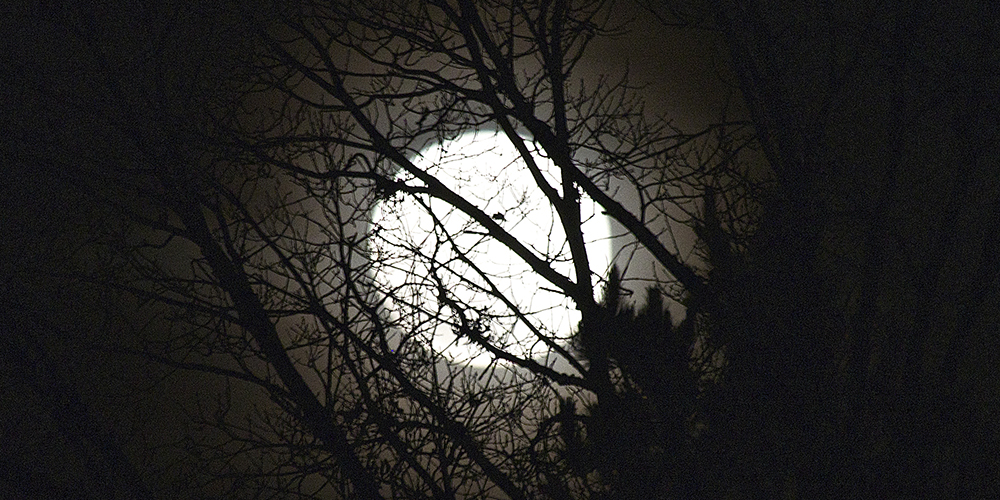 Moonlight is a magical thing. The winter woods illuminated by a crisp full moon seem almost unearthly. Black shadows stand in contrast to the deep purple-blue of the forest with its silver accents of lunar light. Of course, the moon doesn’t generate its own light. It’s only a reflector. What we see in the pale luminosity is reflected sunlight.
The cycles of the moon follow an on average 29.5-day path from the black new moon to full and back to new through the stages of crescent, quarter and gibbous both waxing and waning. Because of its orbit, and the revolutions of both Earth and moon, we see only one side of our nearest celestial neighbor. There is no such thing as a dark side of the moon. There is, however, a side that we never see because the moon’s orbit is perfectly synchronized with its revolutions. It’s a heavenly dance between Earth and moon dictated by gravity, magma and water. It’s beautiful, though not by design, and it is vital for life and everything that sustains life in the thin blue and green biosphere on our home planet.
But enough about the cold science of moonlight. Even more interesting is the folklore attached to the moon and the full moon in particular. In European cultures, the full moon has been both blessed as a symbol of feminine divinity and cursed for unleashing beastly transformations. But much of American folklore about the moon revolved around it’s very pragmatic use as a marker for the seasons. This lore was passed down from the Algonquin language groups that inhabited pre Euro-settlement  North America. This language group of First Nations People stretched from the North Atlantic coastline to the Great Lakes and even into the northern Great Plains. It consisted of dozens of tribes. This is where the full moon names we are most familiar with come from, and the names are tethered to specific cycles in the natural world. Here’s a list of those names along with a few words about why the names were chosen.
January has the Wolf Moon. I imagine this name came to be because the cold and silent January nights easily carried the wolf pack’s howls into camp.
February has the Snow Moon. Northern winters are in full stride for February and often brought even more snow to the region.
March’s full moon is called the Worm Moon. As the ground began to thaw, earthworms came near the soil’s surface and robins returned from their southern wintering areas.
April has the Pink Moon, which is sometimes called the Egg Moon. This one is easy to figure out. The pink is in reference to blooming wildflowers and the egg symbolizes the births of spring.
May’s full moon has a couple of names, too. It’s called the Flower Moon, again a reference to spring blossoms. It’s also called the Corn Planting Moon because, well, it’s corn planting time.
June has the Strawberry moon because, obviously, strawberries ripen during the month of June.
July’s full moon is called the Thunder Moon. July is usually one of Arkansas’s drier months, but   summer thunderstorms are common in the North.
The August full moon has several names. Tribes around the Great Lakes called it the Sturgeon Moon because the big fish were more easily caught in late summer. Many tribes called it the Red Moon because the humid and hazy summer air gave the moon a scarlet tint as it rose above the horizon. And other tribes called it the Green Corn Moon because while the stalks were high and the ears growing large, the harvest was still a few weeks away.
September brought the Harvest Moon. You guessed it, crops — and specifically corn — hit peak ripeness in September.
October brings my favorite full moon — The Hunter’s Moon or the Blood Moon. This moon ushered in the hunting season when summer-fattened deer and other animals were hunted for meat and hides in preparation for the cold nights of winter.
November has the Beaver Moon. Beaver pelts were highly prized among both the First Nations People and European settlers. November was the first month when beaver fur reached maximum thickness and density.
And finally, December brought the circle to a close with the Cold Moon, a fitting name for the month of shortest days and the onset of winter.
Most calendar months have only one full moon, but on the rare occasion of a second full moon in a month that moon is called a Blue Moon.