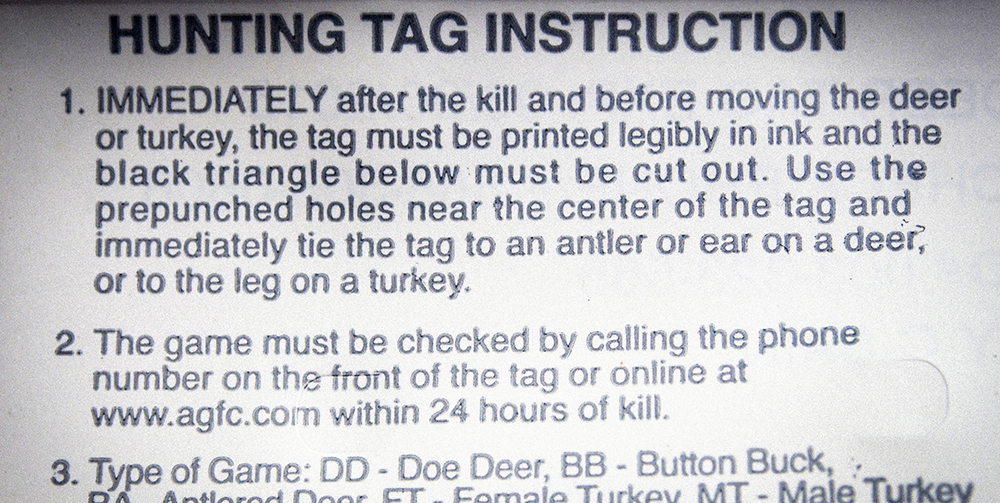 Every Arkansas hunter knows what the phrase “tagged out” means. Arkansas game laws require deer and turkey to be tagged when brought to hand. The process involves removing a tag from your hunting license, filling it out with the appropriate information (time and date of kill, sex of animal, hunting zone, etc.) and then affixing the tag to the animal until said animal is transported home, checked through Arkansas Game and Fish via phone or internet, and processed. So “tagged out” equates to being done. You’re out of tags. You cannot legally go afield with intent to kill another deer or turkey.
In a perfect world “tagged out” means you followed the rules and killed only the allotted bag limit. But we don’t live in a perfect world. In a historically poor state like Arkansas, where subsistence off the land is as deeply ingrained as our love of the Razorbacks, game limits are often regarded as suggestions. Hunting and fishing in the Natural State is a birthright and was once a necessity, and skill in those arenas ranks right up there with… well I can’t think of anything that rates higher for those of us making up the outdoor culture. Putting meat on the table is the highest marker of that skill. So it stands to reason that the more meat you put on the table the higher your perceived skill level. Some of us have allowed this pioneer definition of prowess to define us today, and animals on the ground do not always equate to a punched tag.
Very often the first words uttered after a hunter  announces that he or she has filled all tags early in the season is a disbelieving “why?” from other hunters followed by “there’s still too much season left to do that.” We could easily blame our indiscretions on the culture and peer pressure, but let’s man up and put the blame squarely where it belongs. The sweetest voice of persuasion sings out from our egos.
And the justifications satisfy our guilt: “I did it the hard way,” “I didn’t kill my limit last year,” “look at all the people that didn’t fill any tags, I just took their share because they couldn’t,” “I’ve got to feed the family and (pick a number) just ain’t enough,” “we’ve got plenty (deer or turkeys) in the woods” and the list goes on.
Sometimes we portray ourselves as Robin Hood hunting the king’s deer that, by golly and geography, really belong to us. After all, we know those Arkansas Game and Fish Commissioners are just a bunch of rich bureaucrats sitting in their heated and cooled deer stands passing 140 inch bucks on their million acres of private hunting land telling us how many of OUR deer and turkeys we can take off of White Oak Mountain or our own little parcel of private land. They don’t own OUR critters. We’ll show em!
And we “show em” by the most juvenile form of retaliation, what equates to cutting off our nose to spite our face, and proving without a doubt that we in fact cannot manage the resources on our own.
You can color it any way you want, it’s still poaching. In the eyes of the law our proof of skill rates the same as those pathetic losers trotlining turkeys and sniping deer by moonlight. We are, in effect, stealing from other hunters, from our kids and grandkids and from ourselves. And this discussion isn’t limited to the glamor species of Arkansas. We are stealing anytime we kill an extra rabbit or wood duck, or keep a short fish on the stringer.
I disagree with many Arkansas Game and Fish Commission regulations. I think some are pointless, and I think some legal methods of hunting and management tactics are more damaging to the resource than an extra deer or turkey in the freezer. But there are other, better ways to work on changing those regulations we disagree with. Outlaw subversion changes not a thing in the rule book, and may even help cement those bad regulations in place.
The solution involves creating a new hunting culture and it starts, as change always does, within ourselves as individuals. Ethics is a tricky thing because it involves removal of ego and petty justifications as we focus on the very selfless greater good. And the greater good is the foundation of the North American Conservation Model with its highest banner stating that all wildlife belongs to the public. This philosophy is the reason we hunters enjoy our opportunities to hunt and partake of the wild bounty. When we take more than our fair share we are symbolically spitting on the very ideas that allow us to go afield with a reasonable expectation of seeing game. It’s a self-defeating action.
Arkansas hunters, we’re better than that.