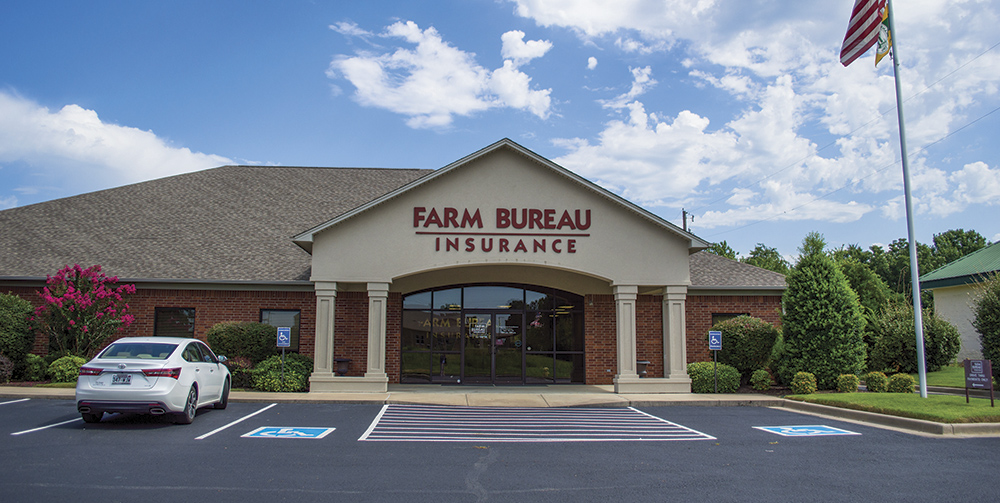 The Pope County Farm Bureau Insurance office sits alone off Parkway. The front double doors lead you into an open seating area with plenty of room to seat you and your family.  Helpful faces wait to greet you, willing to direct you however they can.
It closely resembles the homey roots the organization was founded on in 1935.
Farm Bureau was originally formed when a group of farmers created a coalition geared toward getting local cities to run electricity out to their farms. Richard Pierce, Russellville agency manager, told of how the organization later developed insurance for farm equipment. “It had the intent purpose of helping rural people,” Pierce said. Members later thought, he said, “since we have this organization, why don’t we organize our own insurance?”
Other types of insurance —  life, auto, and home, soon followed. The organization itself, though, still stands as a leader in farm membership despite the fact the farm scene has changed. Those changes include mom and pop farms selling out to larger corporations.
Nowadays, modern farms of all kinds are eligible to seek insurance under Farm Bureau and many have. Farm Bureau serves more than 150,000 members in the state of Arkansas alone, 4,500 of which are in Pope County. The shift also saw a change in membership; not every Farm Bureau member is a farmer.
Pierce and four other agents work to provide friendly local service to the policy holders within Pope County. It’s a service he prides himself on. “Our motto is helping you is what we do best,” Pierce said. “We’re big into customer service; it’s a customer oriented organization. We try very hard to take care of our people.”
Involvement within the community has its perks. Because the organization has gone to great lengths to ensure its able to properly serve the state of Arkansas, it is also better able to be involved with local communities. For example, the Russellville Farm Bureau participates in the Pope County Fair and 4H youth camps. Just recently, Pierce said, they made a contribution to a scholarship fund at Arkansas Tech University to help an agriculture student obtain their degree. The women’s committees also make a difference in Arkansas communities whether it’s policy change or teaching children about where products like wheat and milk come from.
The Pope County Farm Bureau continues to have a hand in shaping this community. The organization hosts monthly meetings geared toward analyzing what’s going on in the River Valley. When committee members see a need for change they respond by advocating for that change to Arkansas State government. Committee members are dedicated to standing by bills that represent their communities. Should it be necessary, members will even lobby for change. Involved in everything from agricultural tourism to swine research, the committee is not only thorough but dedicated to supporting their communities.
One example, Pierce says, is the tax on diesel fuel. “All farmers now do not have to pay any sales tax on diesel fuel they use on their farms. We lobbied [ years ago] to get sales tax exemption on diesel fuel and farm products.”
All work done by Farm Bureau, Pierce says, is nonpartisan. “It’s a very rewarding job, getting to help people,” Pierce said. “Solving problems for them. It’s very worthwhile.”
With all of their hard work, the payoff has shown. “We’re one of the top three insurance companies in the state of Arkansas,” Pierce said.
Anyone in Pope County looking for more information about policies are encouraged to contact the local office at 968-1361. For those outside of Pope County, visit arfb.com to find an office and an agent in your county.