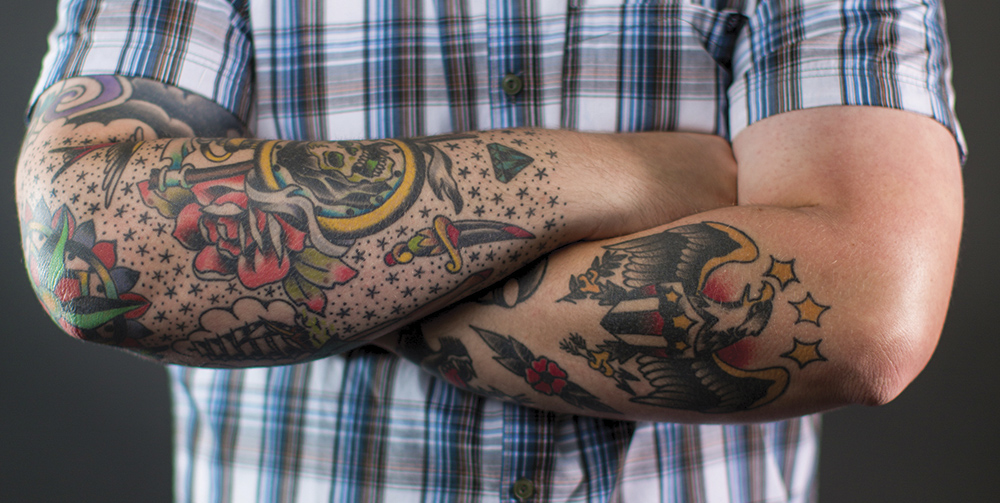 “You ready?” he said.
Yep, go for it.
“Here we go.”
Laying on my side I hear the electric hum of the artist’s needle come to life behind me.  I settle in for what comes next.  Some find it intoxicating. Some find it terrifying.  To me it’s just part of the experience.  Over the past couple of years I’ve wanted to get this tattoo and tonight is the night.
And that’s when I feel the needle hit my skin.

The earliest known record of tattooing dates back over 5,000 years on the body of the famous “Ice Man” found along the Italian/Austrian border in 1991.  From there, female Egyptian mummies dating back to 2000 B.C. have been discovered with tattoos as well.  In Japan the practice dates back to the fifth century B.C.  In 1821, New York inventor Samuel O’Reilly patented the first electric tattoo machine and the popularity of the tattoo has only grown from there.
Though often associated with rebellion, from the beginning until today, the reasons people choose to get tattooed vary. For some it’s viewed as medicinal. For others it’s symbolic with religious or deep personal meaning or it’s art with their skin as a canvas. And for others it’s simply an impulse.  But the one thing tattoos are not is temporary. Tattoos are never ever temporary. You take them to the grave.  And that permanence of ink imbedded within the skin is what makes them so desirable for some and questionable for others.  But over the past hundred years in American culture, tattoos and public perception of them have changed.  They’ve become more complex, more colorful and moved from the realm of sailors, prison, and outlaw bikers to white-collar workplaces and college campuses.
Richard Moore has been a tattoo artist in Russellville since he opened BackRoads Tattoo in 1994.  Seventeen years ago, Michael Norris joined him, and in that time they’ve watched the craft and public perception change.
“It’s a whole different world,” said Norris. “The people who are getting into them now are not the outlaws.  Whereas before the bikers and stuff like that was about it.  Nowadays there are some really phenomenal artists that are getting into it.  And the quality of work has gone through the roof.  The only downside of that is that kind of stuff costs a lot money and not a lot of people in small towns can afford that kind of thing.”
And he’s right. There’s a saying that cheap tattoos aren’t good and good tattoos aren’t cheap.  On average, artists charge $100 or more per hour, and in this world you get what you pay for.  From blurry lines to serious infections, bargain shopping for ink is hazardous.
If you ask Richard he’ll be quick to tell you. “Don’t settle.  Get what you want, but if you can’t afford it don’t just settle for just anything else.  Start saving your money and then get it.  No one needs a tattoo.  You gotta have your car fixed, you gotta have your house worked on, whatever, no one needs a tattoo.  This is an ultimate luxury and that’s how you need to look at it.  If you want it, get the best.  Go where you feel comfortable.  Go where you know these people and they’ve been there for a while and they’re not going to be gone if your tattoo goes to crap in a year.
Billy:  I had a roommate in college who got the barcode off a Mickey Mouse coloring book tattooed on his ankle.  I have a feeling he’s not too proud of it now.  What should someone consider when getting a tattoo?
Richard: All tattoos don’t have to have a meaning, but I wish people would think a little more about the tattoo work that they’re wanting.  A lot of the spur of the moment tattoos they’re going to regret later. I like doing tattoos that represent an accomplishment in life that you’re proud of.  I like positive tattoos.  We do memorial tattoos, but don’t put dates on it because it’s going to remind you of losing somebody on a certain date or a certain year. Or you’re going to be reminded of something that’s going to drag you down.
The biggest mistake they make is that they need to talk to the tattooer — somebody who’s been doing it for more than two months, somebody who’s been around long enough to see how long they hold up and see what happens over time.  There’s some stuff on the internet that should have never been done because it’s going to look like junk in no time.  They’re paying us to do it and we’ll do it, but we’re going to give you our opinion.
The tree I’m getting on my arm and shoulder is fairly complex.  It’s a gnarly old oak tree with the roots reaching down to just above my elbow and its limbs reaching over my shoulder blade.  In terms of skin, it’s going to cover a lot of real estate. Tonight we’re only doing the tree. In a few months I’ll come back and add the leaves.  The tree alone is going to take about three hours to complete.
Billy:  Do you prefer it when someone brings in a picture, or for them to just tell you to do what you want?
Michael: If someone has a real strong image in their head of what they want their tattoo to look like, they’re going to have to have some reference for it.
Richard:  I’d like to at least see somewhat of an angle of what they see.  The closer you can get me to what you want the better.  I want to put my own twist on it, but I can’t sit here and draw it fifteen times and you go that ain’t it. We can’t read their mind.
Billy:  How do you help people overcome their fear of getting a tattoo?
Michael:  While you’re setting up, talking to them is the most important thing.  A lot of times if somebody is getting their first tattoo, and they’re acting nervous, I won’t let anyone come back with them because it’s a lot easier to get somebody back here where I can talk to them one-on-one and answer any questions and tell them what to expect without someone sitting over there telling them this part hurt or this part didn’t because it doesn’t really matter.  Everybody is different and what hurts me doesn’t bother him a lot of times.

I’m about an hour and a half in and the needle isn’t what’s bothering me anymore. My back is aching and I can’t seem to get comfortable.  Laying perfectly still and trying to ignore the needle is starting to wear on me.   People without tattoos always want to know what it feels like to get one.  Specifically they want to know if it hurts.  And let’s be honest, it does.  How much depends on a lot of factors like where on your body it’s being placed, how sensitive someone is to pain and the complexity of the tattoo.  The closest way I can describe the feeling is to imagine you have a really bad sunburn and then somebody decides to come along and scratch their fingernail around it for an hour or more.  It’s painful but tolerable.  It’s not hard to stay still, but it’s hard not to be tense.  After a while the combination of the two starts to wear you down.  We take a break for a few minutes. I get up to stretch and look at the progress.

Two hours and forty-three minutes after we began and I hear the needle stop.
Chris tells me we’re done.  At least for tonight.
I look at my arm as he’s wiping it off and prepping it for the bandage.  It’s red and swollen, but it’s also a work of art that holds deep significance for me alone.  It’ll take a couple of weeks before it’s completely done healing, but for now I’m exhausted as I put my shirt back on and head out the door.  To me a good tattoo signifies something you want to remember, something more than a simple photo on a shelf.  Something you’ve been through and survived.  Something you want to hold on to. Years down the road you can look at it and let the memories flow back to that one thing, that one person, that one time and for a moment drift back and remember.