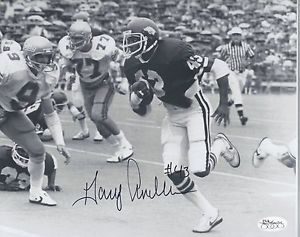 Arkansas Tech University is my alma mater, but, like nearly everyone from The Natural State, I’m a member of the Razorback congregation. I don’t remember when I became a Razorback fan. I think it was kind of like carrying the family name — I was born into it. There wasn’t another option.

I do remember my first Razorback football hero, though. He was the player Lou Holtz called “the most versatile player I’ve ever coached.” His name was Gary Anderson.

Anderson was a smooth-as-glass athlete. His official position was tailback, an elusive speedster that carved through the defense or scorched them around the corner, but he was also a dangerous receiver. My mom’s scream of joy as Anderson caught a beautiful touchdown pass from quarterback Tom Jones en-route to a 42-11 whomping of the No.1 ranked Longhorns in 1981 still rings in my ears today. Billy Ray Smith and a ferocious Arkansas defense lead the way on that glorious day, but Anderson’s catch seemed like the iconic image from one of the greatest games in Razorback history.

Listed at six feet tall and 180 pounds, Anderson was always one of the smaller players on the field, but this only added to his mystique. Countless times through the seasons, South West Conference linebackers bent on destruction thought they had a bead on him and then… SWOOSH! Anderson sliced and diced through them, elusive as ultimate truth. My dad called him a rabbit and those hapless defenders were like young beagle pups. They never had a chance.

I started peewee football the same year that Anderson played his senior season in Fayetteville. His number, 43, was gone before I chose my jersey, but Mom bought me some cool arm pads as a consolation. If I couldn’t wear his number, at least I could wear his accessories.

Anderson wound up his career as one of Arkansas’s all-time leaders in both rushing and receiving yards. Other Razorback superstars have eclipsed his numbers in recent years, but Anderson’s place in my memory has nothing to do with numbers. Anderson was my first hero as an age-of-accountability Razorback fan. I may have been born into the religion of Pig-Sooie, but Anderson was the prophet dressed in cardinal and white that lead me to baptism. Rarely do I hear the words “Razorback football” that an image of number 43 knifing through the defense doesn’t roll through my mind.

← Prev. The Old Gym Next: UACCM is Providing a Skilled Workforce for the River Valley →