Survival Flight: In the Cockpit 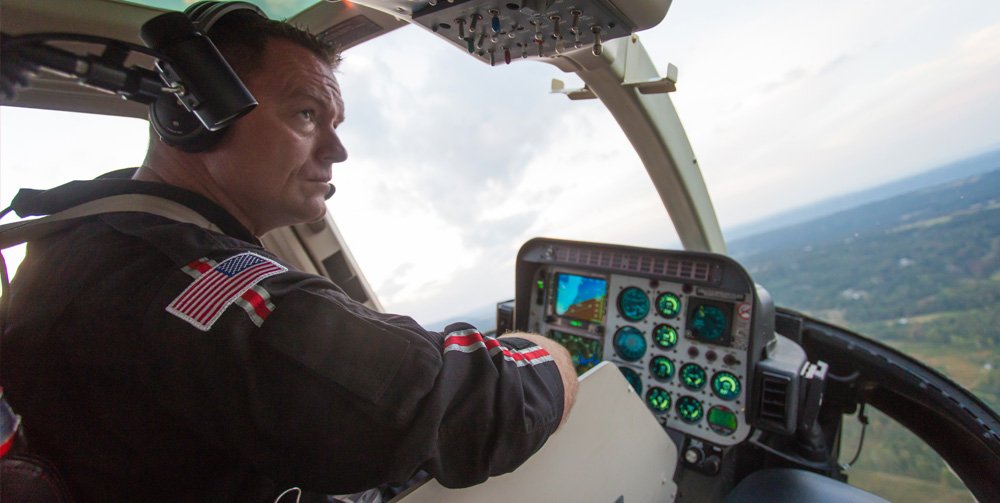 They tell me nothing compares to watching the sunrise from a 407 Bell model helicopter, or starting your day in Russellville, Arkansas and ending it in Dallas, Texas. Commercial, military, or private — the market always has room for them, and they found their place in the arms of emergency services.

Emergency service pilots Eric, Bobby, and Mike are three of four pilots that make up the flight crew at St. Mary’s Medical Center here in Russellville. They man the Survival Flight helicopter, working in conjunction with St. Mary’s to provide the best possible care to the River Valley. From all walks of life and all levels of experience, Eric, Bobby and Mike are working to help someone else live.

At age 27, Bobby is one of the youngest pilots on the St. Mary’s flight crew and is passionate about his career. But the passion is expressed in twinkling eyes and the jokes he makes on the older pilots, usually about their age. The respect he has for his fellow pilots, though, should not be overlooked. Nor should the type of experience he brings to the team.

A southern Louisiana native, Bobby began on sea planes out of New Orleans. After deciding on trade school over college, Bobby put his money down on pilot school. Soon after graduation, he found himself in Phoenix, Arizona, where he earned his flight instructor license. From there, it was Louisville, Kentucky, working as a pipeline pilot flying aerial pipeline surveys for contractors. Then it was Juneau, Alaska, flying tours.

After oil work in the Gulf of Mexico, forest fires in Oregon, and a stint in Afghanistan flying as a contract pilot, Bobby found himself back in the South flying for an oil company. But as the oil industry shook under weight of global market changes, he was let go. He took this opportunity to explore an interest in emergency services and applied for this job. He’s been flying for Survival Flight since June.

While the resume may seem extensive, it’s a peculiarity of being a pilot and almost crucial to the profession. Pilots, unlike medics and nurses, are not bound by state laws and licensing. “I can fly anywhere that’s considered United States,” Bobby said.
The regulations emergency services pilots are bound by, though, aren’t from a source one would expect. “A lot of regulations come from hospital wants, company wants,” Bobby said. But overriding regulations and restrictions all originate from the federal government.

The Federal Aviation Administration has outlined its guidelines for operating helicopter air ambulances in a 60-page document that covers everything from flight procedures to weight distribution. It’s designed, of course, to keep HAA crashes to a minimum as well as enhance patient care nationwide.

Such industry standards for pilots include annual testing of basic skills, flight response and equipment management, a list of pre-approved prescriptions and a time restriction on alcohol consumption before flying. While some may see the rules outlined in the HAA AC-135 as excessive, they serve as a type of Bible for pilots nationwide.

Industry standards aren’t the only thing emergency services pilots come to respect; instinct and a sense of separation from patient care are arguably a necessity to even function in the business. “I try not to find out what’s wrong with a patient until after we’ve landed,” Bobby said. “I don’t want to risk my life, as well as my crew’s life, because of this one individual. So while it may sound messed up, I don’t want to fly into weather I know is illegal and unsafe because of my own sense of urgency.”

The dissociation is critical to the survival of the patient, and the crew. “The reason I disassociate altogether is so I can focus on the flying and maintaining a safe flight environment to keep us all alive.” 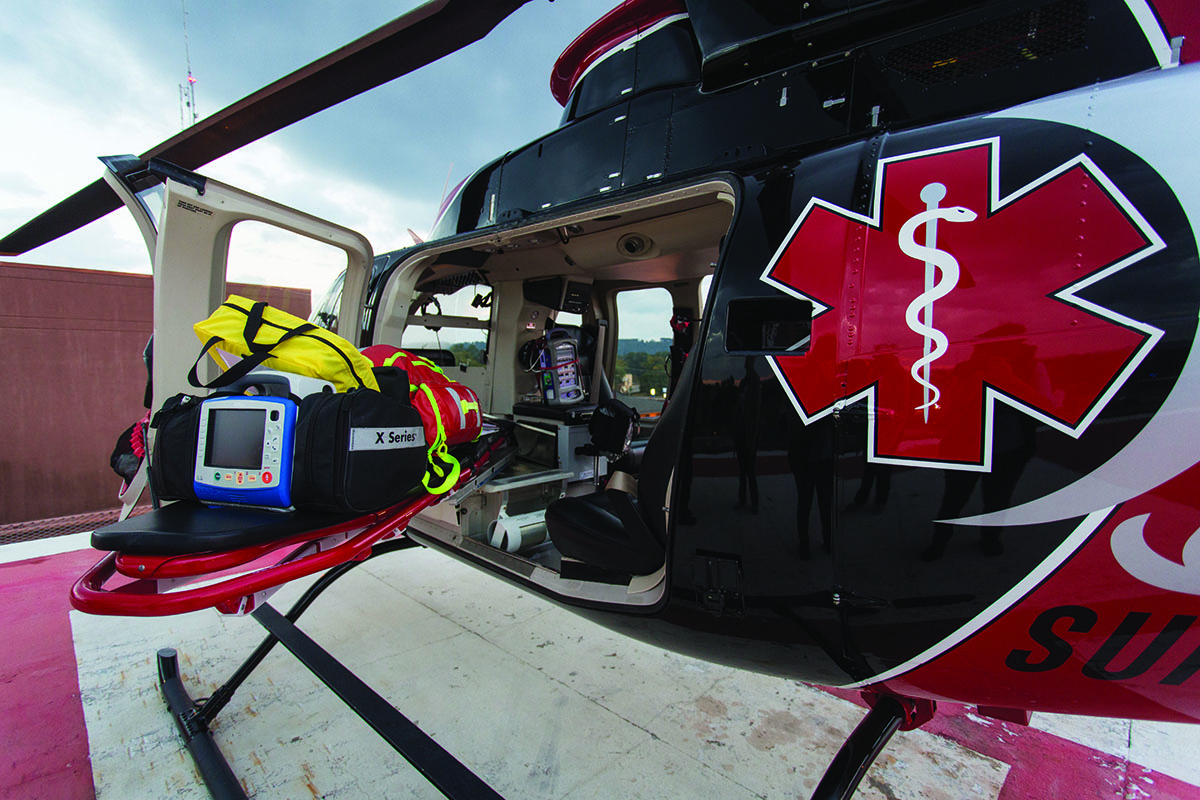 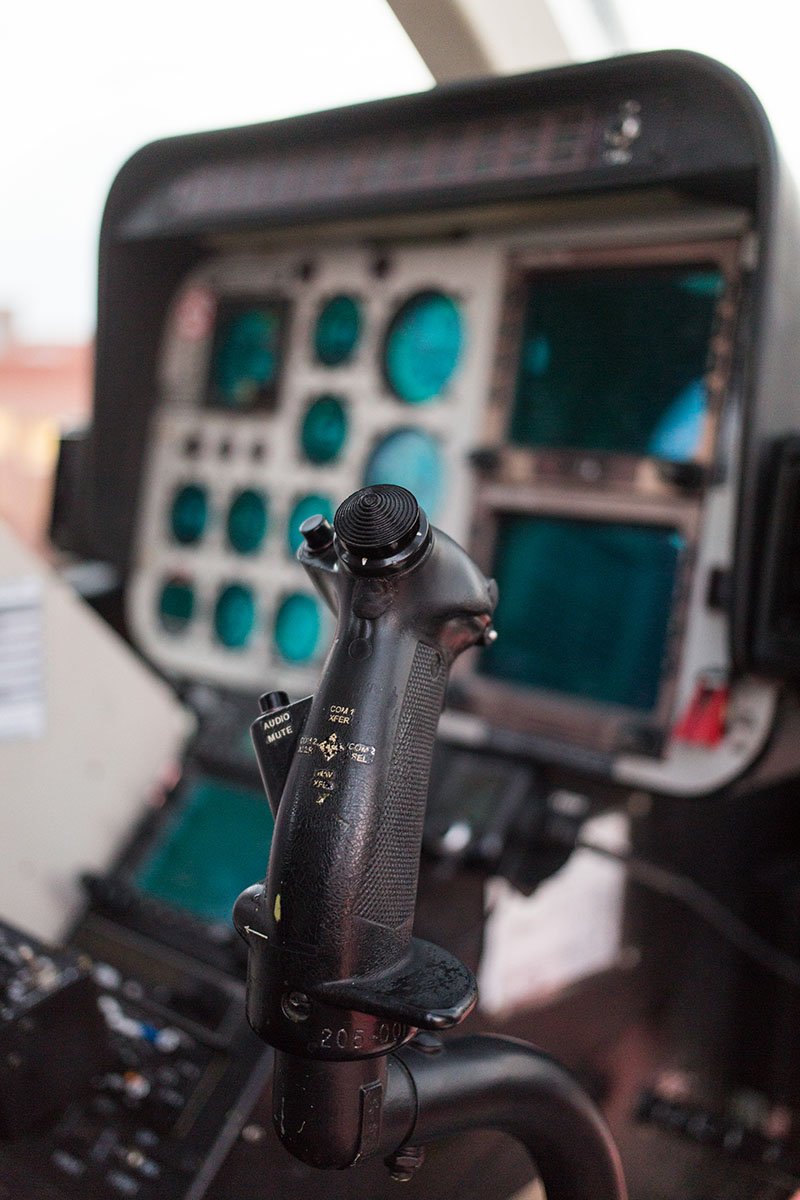 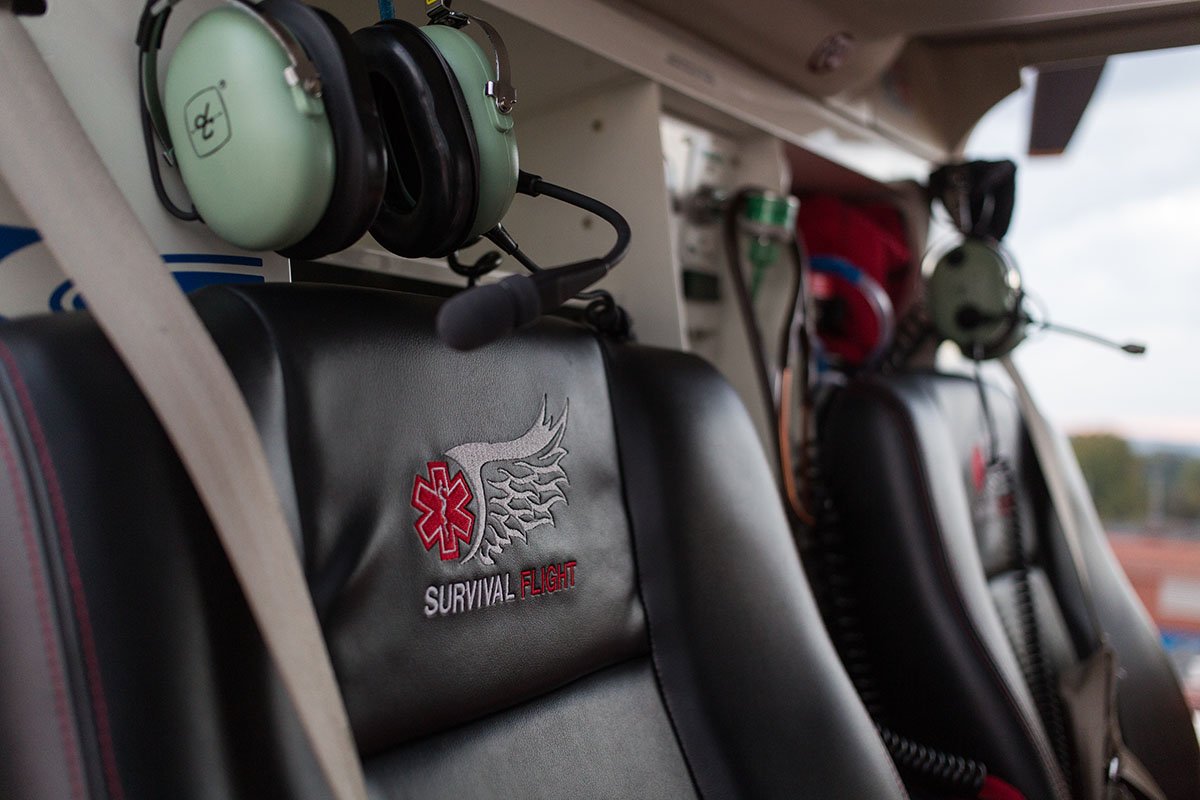 Mike Ridgeway
Lead pilot Mike Ridgeway, 39, got into planes just to jump out of them. After nine years as an Army paratrooper, he took his GI Bill money and went to trade school for a pilot’s license. “If you can’t beat them, join them,” Mike said.

Mike is wide awake at 7 a.m. reviewing the day’s flight logs. Boots zipped, arms tucked into company issue jump suit, he pats his breast pocket to make sure the flip phone that will let him know when the crew has to go to work is in there. A mechanic, a medic and a nurse trickle in as he makes his way around the corner, up the ramp, through a door into the next part of the hospital and up the elevator to the helicopter.

“You can go anywhere you need to go,” Mike said, referring to the capabilities of the helicopter.  And it’s exactly why the Bell 407 is the cream of the crop when it comes to outfitting emergency services with prime equipment.

This particular bird is nimble and agile. It tops out at 160 miles per hour and can hit a 20,000 foot ceiling.  “Flying EMS is harder in a 206 than in a 407,” Mike said, and it’s because of several different reasons. The Bell 407 has the capability to carry a fourth passenger, something the Survival Flight company prides itself on. Should a family member, usually the parent of a child, want to accompany the patient to the hospital, they can. The helicopter can support the extra weight —  up to 5,250 pounds. That figure includes the weight of the fuel, equipment, patient, flight nurse, flight medic, second passenger and pilot.

The stretcher that slides up and out of the body of the helicopter can hold up to 450 pounds and  accommodate a patient up to six and a half feet tall. Fuel capabilities are also improved when comparing the 206 and 407. Russellville to Dallas or Memphis trips can be made on one tank of gas. Should the team need to go further, refueling is a possibility, but less of a probability with the 407.

This particular model, Mike said, was chosen for its speed, performance and lift capabilities. And Mike’s flying doesn’t even begin to push its limits.

You strap in, put on your headset, and “keep the mic as close to your  mouth as you can,” because the 37 foot rotor blades will drown out any other sound. As the blades pick up speed, the craft wobbles, and Mike keeps flipping switches above his head and to the left of his torso. Flight control responds with the green light, and the wobble becomes a hum as the helicopter leaves solid ground and banks left over the top of the hospital.

Mike’s skill and precision are apparent in the banks and hovering as he deftly maneuvers the craft. Semi-trucks and train cars look like Hot Wheels from 10,000 feet. The view of Nuclear One and Lake Dardanelle is breathtaking as the chopper blades slice through humid early autumn air.

A tangerine sun, glowing in contrast against a still purple sky, reflects off the clouds and paints the horizon pink.

By the time Mike lands, ending the 10-minute joy ride, you can tell he’s feeling the buzz, almost like he took energy from the rotor blades as they powered down. The flight crew cheers at the end of the tarmac as all souls touch ground and Mike can’t hide the smile on his face.

Eric Hicks
Eric Hicks, 53, a part-time pilot for Survival Flight, spent a portion of his 30-year Army career flying helicopters. “It was kind of a step up in terms of progression goes,” he said.

Upon leaving the military, he was a C4 with a long history of flight experience. That experience led him into civilian work, much like Bobby Bell. Private contract work didn’t hold his attention for long, though, and EMS had an undeniable allure. What has been most rewarding, Eric said, is working with patients. “I enjoy getting to interact with people,” he said. “And it’s good you can help someone in their time of need in the fastest, and most expeditious way possible.”

The balance between professional relationships and focus, though, is as delicate as flying the helicopter — the end goal is always that everyone makes it safely to their destination. For an untrained civilian, it’s almost unsettling to think that the wellbeing of the patient isn’t the most immediate concern of the pilot. “We operate under a set of rules,” Eric began. “And our set of rules aren’t dictated by the patient. It doesn’t influence our operation. Ours is cut and dry. I do my portion of saving the patient’s life and that’s getting them there as safe as I can.”

The pilots have a mutual understanding with the rest of the flight crew, as well as each other, about their role. The disassociation is universal, at least among this particular flight crew. Bobby agrees with Eric. “I see feet,” Bobby said. “They (the flight crew) see everything in the back.”

The bigger picture
Not enough can be said for all of those who work to save lives. It’s beyond honorable. The attention that the Survival Flight helicopter has garnered has shed light on a facet of that service, but has also worked to give the city of Russellville a presence within the medical field. “It’s going to help make our community care better,” said St. Mary’s CEO Jim Davidson.

The helicopter will enhance more than just patient care. “It really is a boon for the community, not just in terms of patient care, in that something that we wouldn’t have anticipated,” Jim said. “It’s helping municipal government with the sale of fuel. And the PR we get out of it, there seems to be a real infatuation with the public when they see the helicopter and it goes to many public events.”

Jim, though, does nothing but commend the crew members. “They’re incredibly professional. They’re very well trained at what they do and they’re all very personable, right up to the owner of the company.”

That staff, Jim says, isn’t just for company use or community recognition. “The thing that I like is that, though, the helicopter is housed here. It really is a resource for the River Valley. If rural hospitals are within a 50 to 60 mile radius, and feel like this helicopter can help improve patient care in their communities, than that’s what we want it to do. It’s not ours to hoard. It’s ours to share.”

The helicopter serves as yet another tool for River Valley emergency medical services to better serve its community. “It’s a sincere effort to serve the River Valley in a much better way than it’s been served before.”