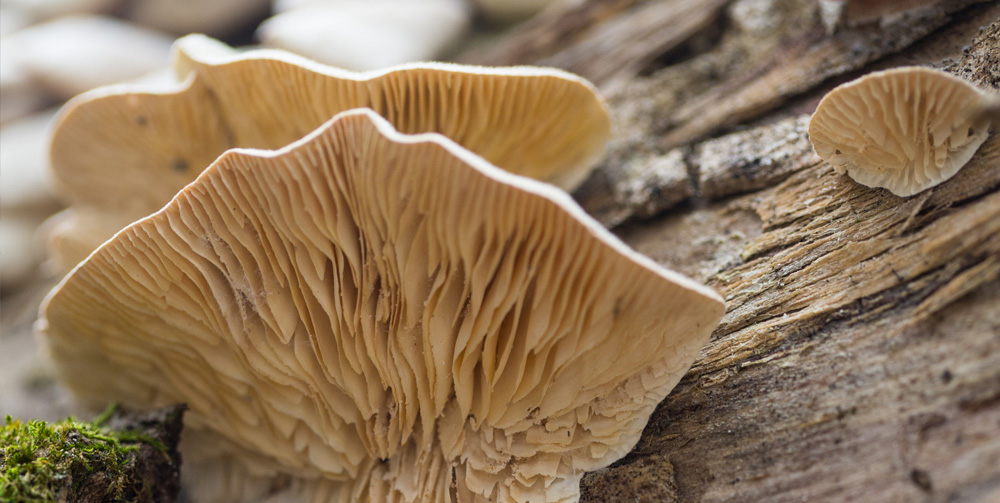 The woods are quiet during the early parts of the calendar year. Quiet, but not dead. Hikes are peaceful during these months; the insanity inducing buzz of buffalo gnats is replaced with emollient whispers of winter. The chilled breeze strikes remaining leaves of deciduous trees, an adventurous chipmunk unwraps a white oak acorn and the spooked trot of a whitetail between hill climbs stipple the atmosphere. This yearly visual landscape shift is often described as mundane. The typical strokes of green and zests of gold give way to a dusty monochromatic array of bleak textures. This Rothko-like aesthetic is exciting for my curious eyes. A wash of gray, the winter woods provide the perfect canvas for spotting a unique and often overlooked constant: fungus.
By and large, these organisms remain mysterious to the average outdoor enthusiast in recognition and function. Majorities associate fungus with decay, but many of the complexities are still unknown. One of the key attributes of fungi that differentiates them from their plant cousins is the presence of nitrogen in their cell walls rather than cellulose. This is what places them at the hub of the nitrogen cycle, the process that enriches the land with nutrients. Those who often plunge their hands into dirt are familiar with nitrogen as part of some commercial and natural fertilizers, and its role in the success of a domestic garden. Nitrogen is critical for plant growth and a lack of it slows photosynthesis, resulting in yellowed leaves and puny harvests. In the forest, naturally occurring nitrogen infused fungi serve as the flywheel for the exchange of life and death. This natural nutrient cycling is key to maintaining balance and making proper use of death within the ecosystem of the forest.
Identifying a fungus can throw off even the most learned of biologist from time to time. In Arkansas, we enjoy a deep diversity of fungi given the variety of terrain that makes up the state. I err on the side of a caution when it comes to the “on the spot” analysis of certain mushrooms, and especially for consumption after decades of instruction to eat from the commercial produce chiller rather than plucking straight from the earth. I’ve known local mycophiles to brag of their forest spoils from time to time, teeming with excitement over recycled plastic bags stuffed with chicken of the woods or handfuls of morels collected straight from the base of a familiar white oak. Coming across a jackpot of morels is no easy feat considering their irresistible nature to deer, turkeys and the occasional wild hog. Aside from solid forms on the forest floor and clinging to deadfall, there is another type of fungus that has helped make the Arkansas River Valley famous. Saccharomyces cerevisiae, or brewer’s yeast, is what makes the fermentation of grape juice into wine possible and is naturally occurring on ripe fruits like grapes and plums.
The start of a new year puts me into a state of reflection, especially on symbolic relationships between humanity and nature. Personal growth is a theme of the still months of winter; the hours of the day are limited and the air is too cold during most waking hours for any long bout of outdoor activity. Some of us brood. Some tuck underneath hand-me-down quilts and pour ourselves into classic novels. Some of us purposely expose ourselves to the damp cold as a cathartic practice in testing immunity. Our wild instincts tell us to hibernate, to pack on a few extra pounds and await the coming of spring. This waiting gives way to reflection. We reflect on the next steps in the cycle of the new year: how we might infuse more of ourselves and the talent nutrients we’ve been equipped with into our own environments. Yes, I know this sounds like a far stretch, but stick with me. In our own symbolic nitrogen cycle, this is the time to embrace the functions of the fungi that litter our region. It’s this time of year that gives way to spring cleaning, thoughts of minimalism and the urge to be better versions of ourselves. Perhaps this is our time of decomposition.