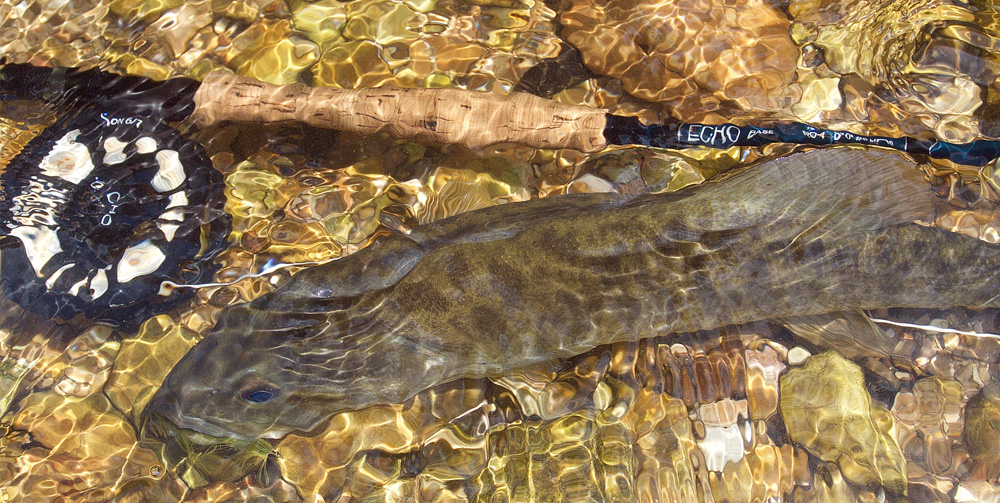 I’ve been griping about rained-out local creek smallmouth fishing all summer long. The high waters made fish tough to find and often posed a wading hazard. But just an hour’s drive north, the crystalline cool Buffalo National River flowed under more normalish summer conditions. Ever since the fly rod — an elegant tool for a more civilized angler — found its way to my hand a couple years ago, I’d been dreaming of a trip to the iconic Buffalo River.
The Buffalo is the archetype of Arkansas’s Ozark streams. Limestone filtration makes for moonshine-clear riffles with dazzling aquamarine pools. There are towering bluff lines and abundant wildlife, and within the Buffalo River watershed, and along the creek itself after canoe season and far from the public access points, you can find that most elusive of natural treasures — blessed solitude.
Calm winter evenings feature an aching, cold steel quiet that cuts nearly to marrow. There is a sentiment in the silence, a desolation that speaks with old and nearly forgotten languages. And then you might hear elk bugle from a shadowed hollow, the last flickers of an autumn inferno licking at the loins of a confident bull. The screaming roar rouses Pleistocene memories and vestigial urges in any listening human. It’s an invitation, an enticement to rejoin the primal dance. John Muir heard the mountains themselves calling. You can hear that, too, if you listen. But it’s often by cervid proxy along the Buffalo River.
In summer, the river solitude is melodic with the harmony of neotropical songbirds and the hushed movements of secretive creatures. Summer tanagers flash through the canopy with intensive songs to match their bold scarlet plumage. Velvet-tailed timber rattlesnakes glide in scaly silence over lichen covered rocks and through the shadowed forest of white oaks and shag bark hickories. Under the stars, a burbling river is accompanied by leopard frogs and Katydids as whip-poor-wills trill in melancholy tones and great horned owls punctuate the night with haunting flutes.
The Buffalo in her lacy green summer dress had been on my mind at least weekly through last autumn, through the dark dead days of winter, and the anticipation grew with each warm southern breath of spring. But June, July and August came and went and the Buffalo remained just a summer dream. Due to all kinds of obstacles laid down by ordinary everyday life, my only summer visit to the Buffalo came in early September. It was a family day trip with the noon sun blazing down on a hole of water that featured its own parking lot complete with hers and his restrooms.
But just a little Buffalo River is better than no Buffalo River.
Though it’s known far and wide as an epic if hardly formidable float during the spring rains, the Buffalo is an under appreciated smallmouth bass fishery. I’d caught a few dandy fighters through the years, but rumors of 20-inch brownies were the fuel behind my nearly year-long Buffalo River obsession.
Spoiler: I did not catch a 20-inch brownie. But I did catch a brownie of significance.
As my wife, daughters and granddaughter frolicked in spring-fed creek water, I plied the green depths and copper shallows with a fly rod. It was the wrong time of day. It was a public access point. Summer was nearly over. But the 16 1/2 inch tiger-striped bolt of bronze that hit the wooly bugger with a nearly audible thump didn’t care. My 6-weight rod bowed in reverence as the fish lunged for safety in boulders that had rolled from sheer bluffs above eons ago. Once, twice, three times the drag ticked with a nervous energy as I prayed strength for the leader and steadfastness for the hookset.
And then the storm passed.
The smallmouth was in the shallows. Ozark light, bent and wrinkled in the water, washed over fierce eyes and golden fins. I gently removed the hook and supported her belly in a pebbled shoal. Gills pumped in earnest as she caught her liquid breath. Pectoral fins whirled and her tail took on a slight bend as current rippled through my fingers. With one flick she cruised back into the pool, fading into the river until I could no longer tell water from fish. 