Look around the rough edges 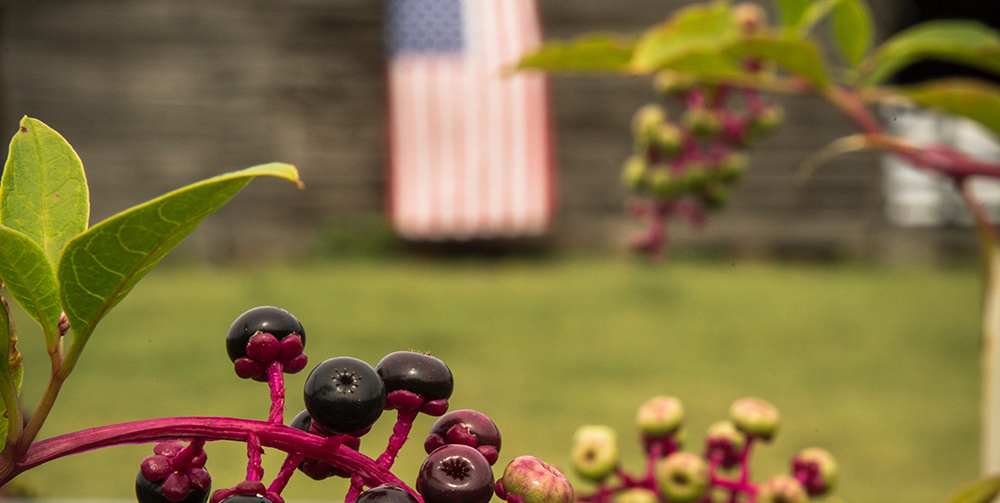 Most folks know American pokeweed (Phytolacca americana) by its colloquial name — poke sallet. If you grew up around any semi-feral areas, from clear-cuts and hayfields to empty city lots, you probably saw American pokeweed growing in those forgotten areas.
It’s a North American native found throughout the continent and tenacious in its existence. You can’t really kill off pokeweed. You can only hope to contain it. The brittle roots run deep and attempts to pull it up lead to a fractured root in the ground and, shortly, a brand new pokeweed shoot. Each plant can produce up to 50,000 seeds in its lifetime with seed viability lasting up to forty years. So even if you think it’s gone for good it’s probably not.
As a native plant, its life is intertwined with its environment. The shoots and purple berries are favored foods of deer, birds, raccoons and other wildlife — seeds passing through a bird’s digestive tract is one of pokeweed’s most successful strategies for colonizing new areas. As I mentioned before, it’s one of the first plants to populate disturbed land, setting up shop and setting the stage for other plants and animals to move in as the slow march of succession leads to a hardwood forest. American pokeweed is a rebel pioneer of the wild and pagan, an agent of reclamation. American pokeweed is the definition of subversive.
Pokeweed is also intertwined with humans of North America. Descendants of the first settlers in the Americas, the Native Americans used the plant for myriad purposes. The berries were paint. The plant’s toxicity was harnessed for medicinal use. And, in its early spring emergence, American pokeweed is edible.
All that utility and legend carried over to rural Euro-American culture, and it’s still firmly embedded in American rural culture to this day. “Poke sallet” was and still is a staple of rural food ways. Free and growing anywhere with an open patch of dirt, American pokeweed found its way to the table (after careful handling of course, remember, it’s toxic) to many that found themselves with a growling stomach and empty pockets. It was a lifeline from nature, along with wild meat, persimmons, morels and a host of other foods available to all those willing to look. American pokeweed is always on the periphery of civilization as a reminder of our oft forgotten connection to the land. But if you look to the rough edges, where wilderness touches the farm fields, you’ll still find American pokeweed.
And now American Pokeweed is the name of a brand new column in ABOUT the River Valley magazine. The plant’s attributes led to our decision to use its name, and we hope that you, the reader, see these attributes in our storytelling. Our aim is for a smart column that looks at the connection between people and place, how the land molds attitudes and cultures. We want to explore the deliberate connection of people to land and place with a challenging combination of grit and poetry. I’ve tried to come up with a solid and short description of voice for this column, and I’ve struggled. The best description I’ve heard is from writer Billy Reeder: “It’s like discussing Aristotle over beans and cornbread.” But maybe the concept is just too big for a few words or clever phrase. So I’ll again point to American pokeweed and let its character describe our voice. The legend and reality of the plant are rooted in its connection to place.
Back when we were trying to decide on a name, and I first pitched “Pokeweed” or a variation of, writer Meredith Martin-Moats hit the bullseye with what I was going for. “It’s metaphorically rough around the edges,” she said. The writing will not be rough around the edges, metaphorically or otherwise, but the spirit of the column and those contributing most assuredly is.
Look to the rough edges, where wilderness touches the farm fields, where people and the land are intertwined, and that’s where you’ll find American Pokeweed.