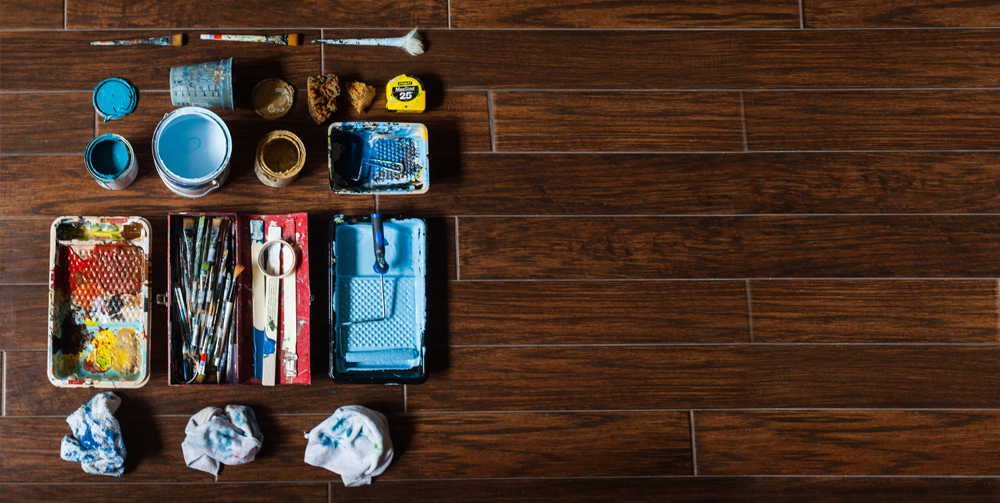 Murals may be humanity’s oldest form of art by painting. The earliest known murals were displayed on cave walls dating back to at least 64,000 years ago. Those weren’t even created by us, but instead by our hominid cousin Neanderthals. The earliest known Homo sapiens murals are over 35,000 years old. Clearly, murals are part of our DNA as story tellers.
Modern murals run the gamut from political to historical to amusing to even the abstract. But they all share one commonality, one purpose that stretches behind us into prehistory: they tell a story in images to the masses. Murals are the ultimate form of art for the people. They are the pigments of democracy brushed, rolled, and even finger painted for display to the public at large.
On the following pages, we showcase three murals you can find here in the River Valley. The styles and palette vary. Two were completed within the last couple years and one was painted almost 80 years ago. But they all serve as a visual narrative, telling the story of who we are. 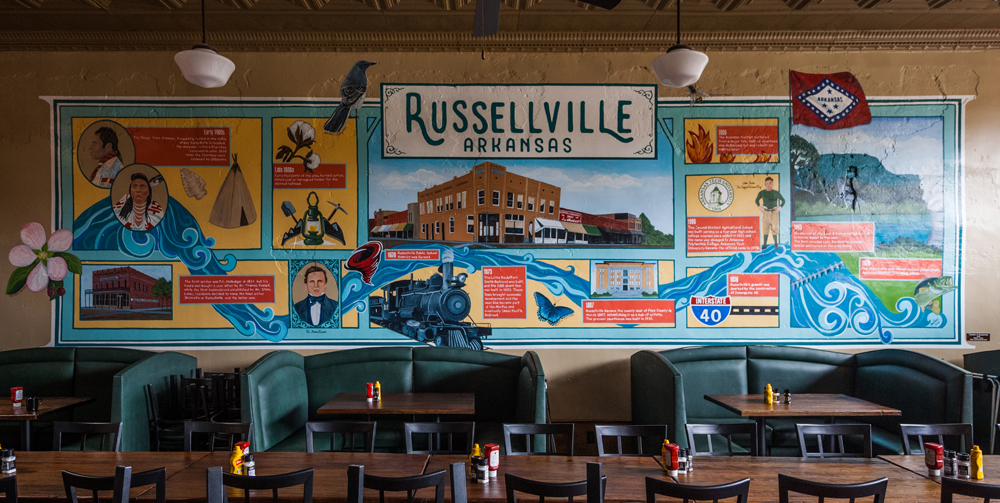 Historic Timeline of Russellville
Mural by Sherry Trusty
Sherry Trusty’s mural representing a general timeline for the City of Russellville adorns a wall in the Old Bank Sports Grill in downtown Russellville. Sherry says it took three weeks to plan the mural and another three weeks to paint it. The Arkansas River flows through stops in time for the Russellville area beginning with two portraits of Native Americans — one representing the Osage tribe who hunted along the river before European settlement and one the Cherokee tribe who were moved to the River Valley by the US government before their final forced move to Oklahoma. Images of the first store built and owned by Mr. Shinn and a portrait of Dr. Thomas Russell, who owned the first house and was the town doctor, are next. Russellville residents are likely familiar with the story of how Russellville was almost Shinnville.
Cotton plants and mining tools represent the early economy of the area. A train, cyclone, Interstate 40, Nuclear One and Lake Dardanelle along with other iconic images of Russellville populate the mural.
“I really hope viewers will discover the history of the town and want to learn more,” says Sherry. “It was hard to decide what to put in the mural and there’s a lot more interesting history about this town. It’s an educational mural as well as a work of art.”
Posters of the mural can be purchased at Dog Ear Books 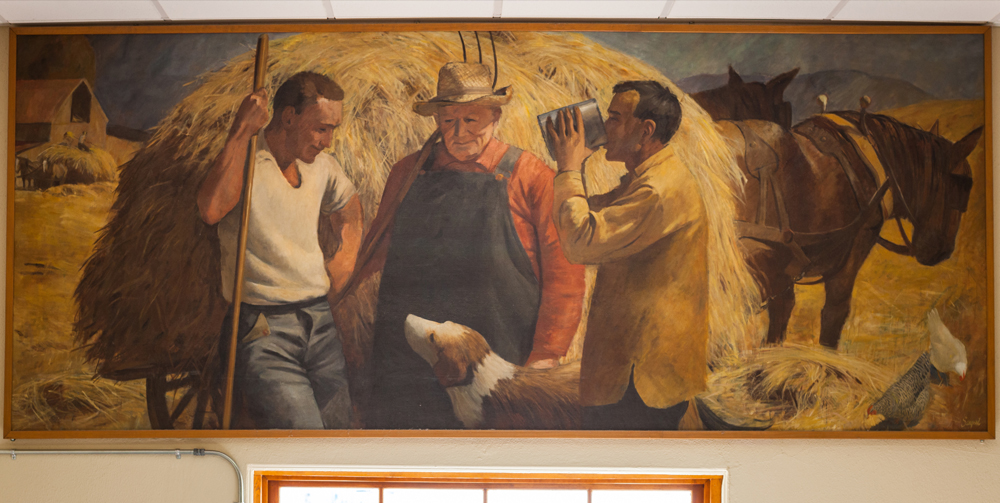 Men at Rest
Mural by Richard Sargent
The mural “Men at Rest” was painted for the Morrilton post office by Richard Sargent in 1939. This is the same Richard Sargent from Moline, Illinois, whose work was featured numerous times on the cover of the Saturday Evening Post. It’s quite an honor to have such renowned talent on display here in the River Valley.
Between the years of 1933 and 1943 the federal government employed nearly 10,000 artists who produced an overwhelming quantity of work. This mass commissioning brought art to the common man, essentially bridging the gap between art and society while literally saving a generation of artists who would have been lost to the struggles of the depression.
Sargent was commissioned for $590 to create a mural for Morrilton, Arkansas, as the result of an honorable mention in a fine arts competition. The mural is Sargent’s interpretation of the weariness one feels after a day’s work under a hot sun and depicts three men in front of a wagon load of hay as they pause a moment to take turns quenching their thirst. To the left of the wide meadow is a barn and another wagon from which hay is being unloaded. The mountain in the background is typical of the Arkansas Ozarks.
The work has since been moved to the front entryway of the Conway County Courthouse.
Information on this mural is credited to the University of Central Arkansas Arkansas Post Office Murals website uca.edu/postofficemurals/home/ 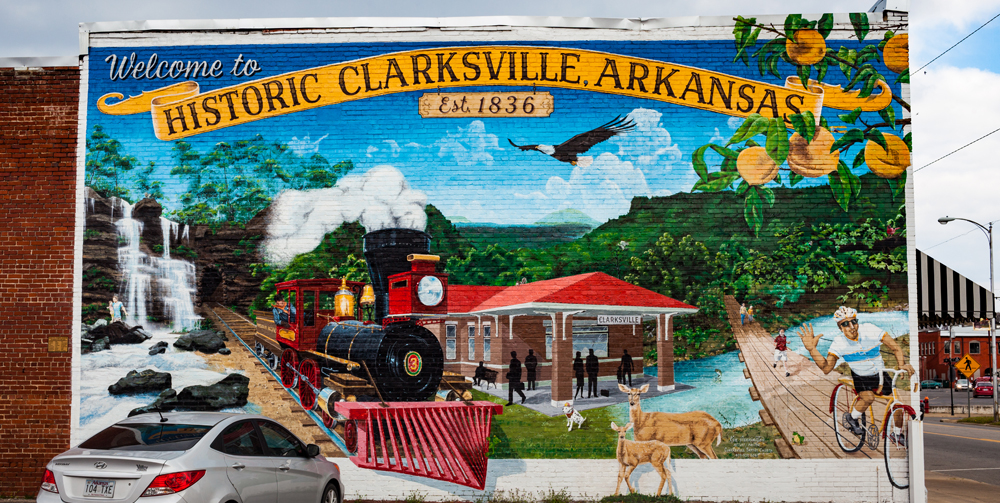 Welcome to Historic Clarksville
Mural by Ken Pennington
The Ozark Mountains stretch north as a bald eagle soars overhead. A depiction of Curveball Falls (the train tunnel isn’t there in reality so chalk it up to artistic license) in all its majesty anchors the left side as representative of the waters that formed the hills and eventually the Arkansas River and carved the River Valley. The rural and natural essence of Johnson County is rounded out with whitetail deer in the foreground, a cyclist on one of Clarksville’s gorgeous walking/bike paths and, of course, those famous big beautiful Johnson County peaches are on on there, too.
The depot and an old steam engine, which has become a sort of symbol for Clarksville and the town’s growth sit center. And then there are all kinds of little details you might not expect to find on a mural thanks to Ken’s painstaking work. “It took six or eight months off and on to finish,” says Ken, who is also a local pastor and all around busy guy. “I just take too long sometimes.” That’s a gentle self-deprecating way of saying he got caught up in the creative process and found it difficult to quit with the details. “I used brushes, and some little bitty brushes,” says Ken. “There’s a bass jumping and, you’ve go to look real careful, but he’s jumping after a dragonfly.” Also in the mural: a snowflake, an arrowhead, and even a mirror. You can visit downtown Clarksville and give Ken’s work a gander to likely find even more surprises.