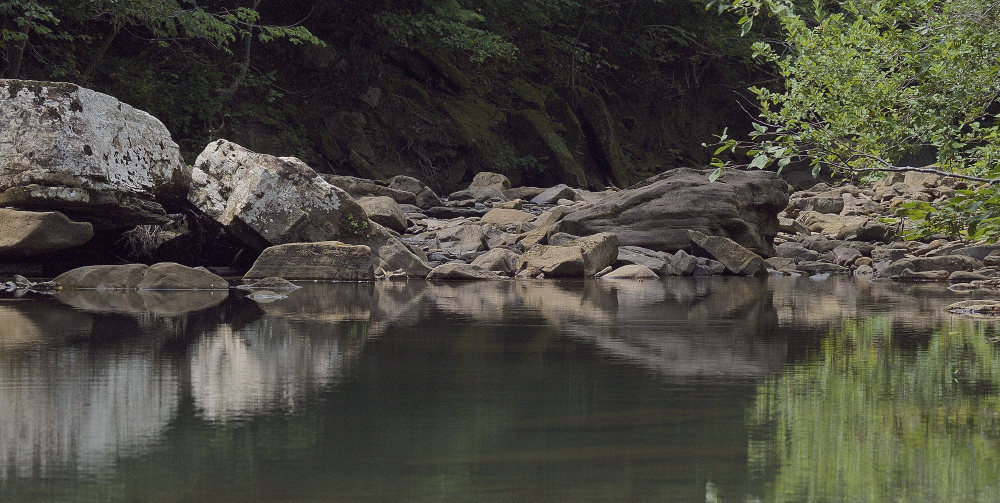 The pool is barely wider than my 9-foot fly rod. Riffles are mere trickles. The creek disappears just beyond the next pool, filtering through porous karst into the soil and stone itself for several yards and then back to the surface. The stretches of dry, sun bleached rock appear alabaster from a distance. But closer looks offer a washed out watercolor spectrum. The subtlety in mineral chroma is telling of the entire experience. You don’t come here for a lot of smallmouths or for big smallmouths, which is probably why barely anyone comes here at all.
Most don’t even know this place exists. It’s a tiny tributary cutting through vertical topography in a backwoods county that’s mostly National Forest. The turnoff from the main dirt road onto what could barely be called a road leading here is subtle, too. You’ve got to know where it is and then you’ve still got to look carefully. The turn off immediately falls into a mud hole that serves as a moat. It keeps two-wheel drive vehicles out. Greenbrier and overhanging maple limbs guaranteed to dig into paint, leaving a scar that may or may not buff out, frame the chocolate-colored water. No pretty boys allowed. All of this narrows the appeal across most demographics.
My friends don’t understand why I come here so often. It’s an hour’s drive. I live within 20 minutes of much better fishing, and I’m short hours away from world-class river smallmouth angling with regular 20-inch fish that I’ve not experienced. “You’ve never fished the Eleven Point?” Incredulous looks always follow these type questions as I shake my head with a sheepish grin and they shake theirs in wonderment as I tell them about the smallish bass, the ebony jewelwing damselflies and how a place doesn’t give up secrets in a casual relationship. “Man, why don’t you just drive another hour and catch some pigs?” It’s impossible to explain. I do come here for the fishing, though. But also, I don’t.
There’s a prehistoric feel here. Fossils are imbedded and imprinted in the limestone, which is itself a kind of fossil. It’s the skeletal remains of various marine organisms, a remnant of the ancient sea that once covered this land before colliding continents created an upheaval of terrain-altering proportions. South of here and across the Arkansas River, the Ouachita Mountains rose and were crushed, the rock folded into east-west running ridges. But the Ozarks thrust upward as a singular plateau with creeks like this one slowly eating away at the softer stone creating hollows and benched ridges.
This trip so far has produced more creek chubs on the wooly buggers and poppers than smallmouth, easily three to one. Chubs hit with abandon. Their big mouths and bronzy colors have even made me second guess what exactly was on the hook a few times. But a surrendering spirit gives them away. They lack stamina and succumb quickly. Their sausage-shaped bodies covered in small, thin and flexible scales even feel soft. They are predatory minnows, though, a fact that alone makes them cool, actively competing with smallmouth and green sunfish for top spot in this creek. And they are eager. I fool them with ease while smallmouths and even the longear sunfish eye the fly with suspicion.
I work my way up the creek from pool to riffle through dry stretches, and continue to catch fish. I see smallmouth everywhere in the glass-like water. They see me, too, and they don’t seem to care. They watch me cast then rush the olive wooly bugger fly in a pack. Occasionally, greed will overpower caution and one will grab the fly. I’ve got to be quick with the hookset. They often spit it out faster than my senses can realize I’ve got a bite. None are bigger than a foot long, and one bite is all I’m allowed from each pool or riffle. One catch or one whiff and I’m done. That’s it for this stretch of water.
As I push upstream, the bed narrows considerably as ridges on both sides compress and tilt its bank. This is the end of my journey today. No more pools. No more riffles. Just water training for its role as sculptor. This is where the primeval force still carving the creek channel begins. Boulders big as cars fill the last pool as water rushes down, cleaving the steep stony soil uphill far as I can see. I doubt the waist-high water would be even knee deep without displacement from the boulders. Witch hazel and tag alder reaching for sunbeams crowd the sliver of open air above. Backcasts are tough so I roll the bugger toward a jumble of rock and watch the floating line dart under. The strip and raised rod work to bury the hook and a feisty bronze bass rockets from the water, fierce and wild and likely untouched by any other hands. In all probability, I’ve been its only encounter with a human. The fish and these headwaters are pristine, a word I don’t think I’ve ever used before and the rarest of designations nowadays.
The boulders, this tiny pool, the minuscule bass in competition with minnows, they are all reasons why I’m here. And then there are other reasons that I can’t even articulate. Despite the diminutive nature of these waters, they contain a galactic presence, a connection to something infinitely profound yet intimately familiar.