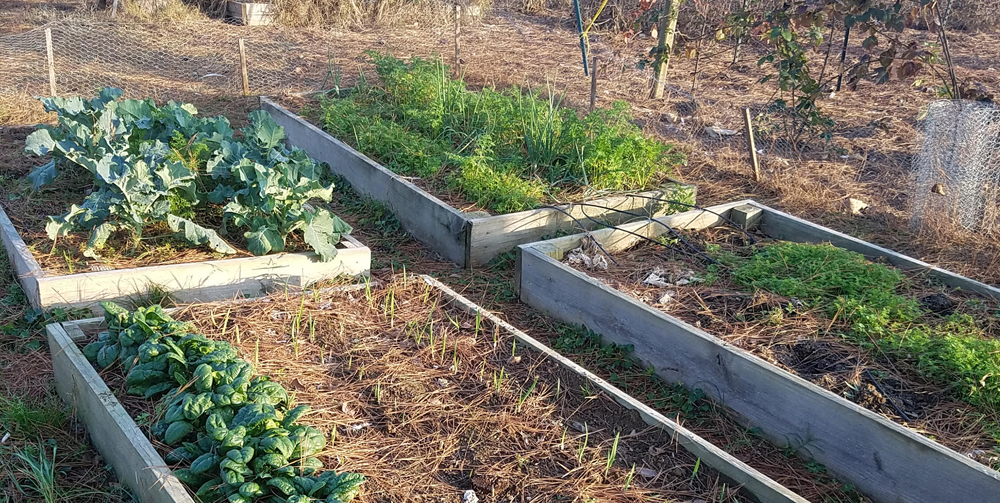 Standing at my kitchen table, I add water to the black, fluffy medium and stir. But I’m not baking a cake (although our family has four birthdays in August). Instead, I’m moistening a half bag of seed starting mix, preparing to plant broccoli, spinach, and cabbage seeds.
I admit, a strange feeling sweeps over me as I plunk those seeds into the warm mix in the middle of the summer. Typically this task occurs with the NFL playoffs in the background, a roaring fire in the hearth, and if we’re fortunate, a dusting of snow outside the window.
But I’ve learned that preparing a fall garden, even as I’m neck-deep in canning and freezing the summer harvest, is worth the extra effort. Growing vegetables in the fall has proven so rewarding to me that it’s now a mainstay in my garden plans.
I didn’t always feel this way, though. When August rolled around and I could barely keep up with the harvesting, preserving, back to school preparations (oh, and did I mention four birthdays?) I couldn’t wait for the slower pace of autumn and winter. Let’s clear out the garden and call it a day, right?
But once I experienced my first taste of a fall garden, I immediately decided it was here to stay.
In case you’re on the fence about whether to put away your gardening tools until the garden itch returns in late winter, allow me to make a case for the fall garden.
Less Work. Yes, it’s hard to plan for a fall garden when the summer one isn’t finished. But in the long-run, a fall garden requires much less time and effort. For me, it’s a much smaller endeavor. I focus on key crops like lettuce, carrots, and spinach. Those vegetables take up less space than a wildly prolific zucchini plant or a large patch of black-eyed peas.
Less Weeding. As the season begins to wind down and the daylight decreases, weeds slow their growth as well. This makes the most hated chore of them all more manageable, and toward the end of fall, don’t be surprised if you don’t have to weed at all.
Fewer pests. With a few exceptions, most troublesome pests complete their life cycle by late summer and have returned to the soil to overwinter. For example, I have my best squash harvests in the fall with virtually no pest pressure from the squash bug and squash vine borer.
Better flavor. Many cool-weather loving crops offer a sweeter flavor after a light frost. Carrots in particular taste the best when harvested in November or even later.
Jumpstart the spring garden. Spinach thrives in cool weather, and in most seasons it will even survive the winter. When timed right, not only will you reap a fall harvest but if you leave it in the ground, you’ll notice it growing again in January for a harvest extending until spring. Also, you can plant garlic in late October to early November for a June harvest of homegrown garlic.
Enjoy an Arkansas autumn at its best. Although we all love spring, there’s something special about snipping lettuce to accompany an October cookout or planting garlic on a crisp November day.
Although I do start many of my fall crops indoors, you don’t have to, especially if you’re a beginner.
You still have time to grow a late summer crop of squash, zucchini, corn, cucumbers, or bush beans if you plant in early August so you can get a harvest before the average first frost in late October. On the back of the seed packet, you’ll see a “days to maturity” number. Add 21 to that number — 14 to account for the decrease in sunlight and seven to give you a week to harvest before the frost. From there, count backward from our average first frost date, which is October 26, to know when to plant.
Cool-weather crops can tolerate a frost and many established plantings will survive a freeze, so their planting dates are a little more flexible. Many crops like spinach, peas, radishes, carrots, lettuce, beets, and arugula can be planted directly outdoors in late August or early September. Longer-growing plants like broccoli and cabbage need to be started earlier indoors, or you can buy starts at a garden center and plant them in August.
You’ll notice that crops planted in late summer grow quickly due to the warm soil, but be sure to keep them watered until the fall rains come more consistently, specifically when you’re waiting for seeds to germinate. But once these crops begin growing, you’ll be glad you put in the extra effort!
Though most people think of gardening as an activity for the height of summer, it’s easy to miss the rewarding experience and productive harvest a fall garden can provide. If you try it, you may just find that a fall garden is your favorite one.