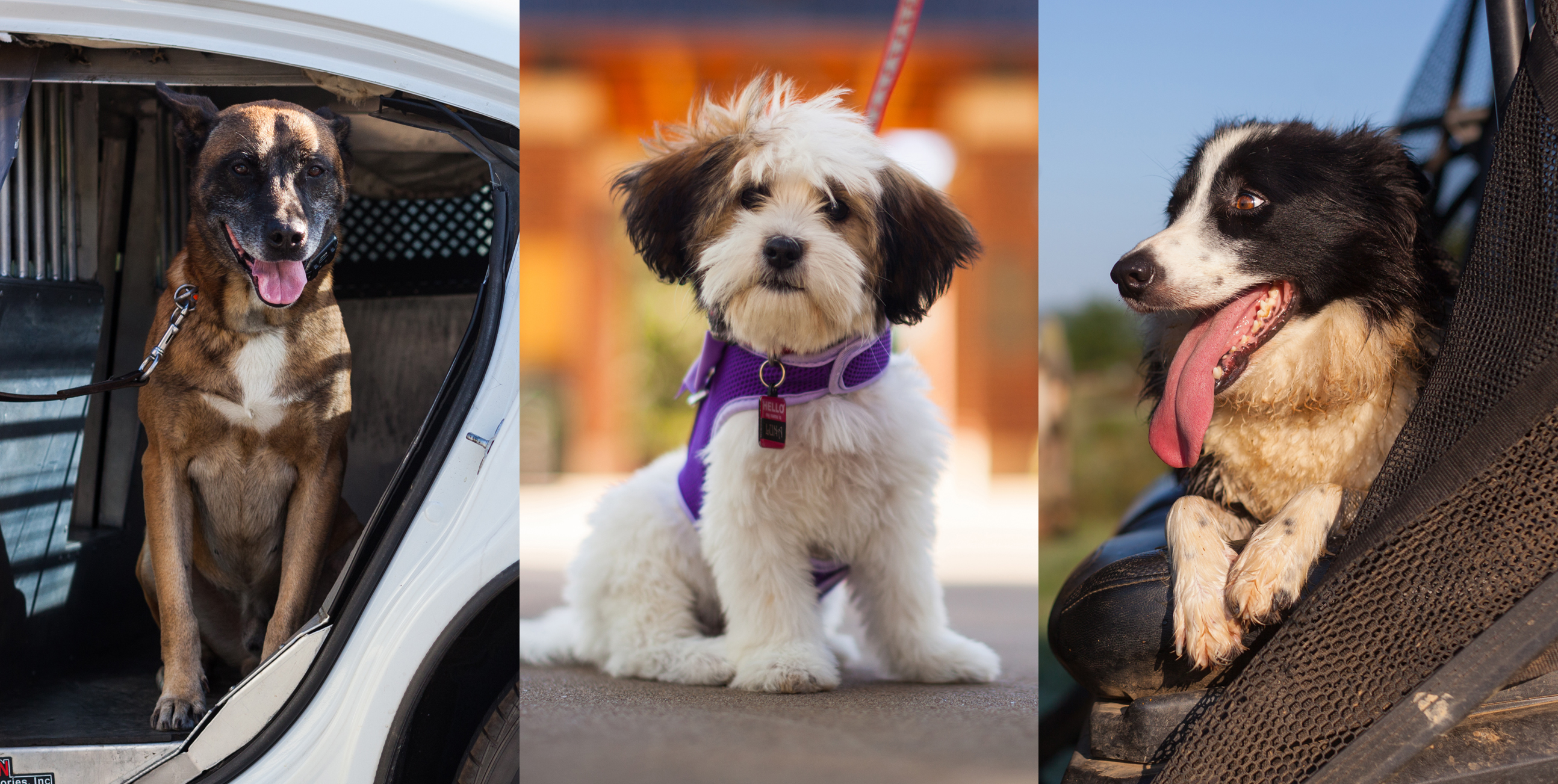 Of all the roles we ask dogs to fill in our lives, that of working partner is most demanding. They tackle these jobs with a professionalism sometimes lacking in our human work partners.
Perhaps this level of competence is fueled by ancient social bonds formed through the ages, the remnants of pack culture. Ultimately, the dog’s goals boil down to doing what makes us — the new alphas — happy. Ensuring that the alpha is pleased is always best for the pack.
We decided to shine a light on a few alpha human/working dog relationships in the River Valley. From cattle dogs with their finely honed herding instincts; to a police dog who walks the blue line with a partner who views him as family; to a young and adorable lap dog learning skills that could save her owner’s life, the breeds are diverse and the work is varied. But the stone-solid character of every dog is identical.
It’s safe to say that the people featured could not do what they do without their canine partners. And it’s equally safe to say that the dogs are up to the task.

Officer Chase Melder & Pavatt
When you first meet Officer Chase Melder and Pavatt from Troop J of the Highway Patrol Division of the Arkansas State Police, you can tell the duo are happy to have each other as partners. And partners who like each other often work well together as a team. Sometimes that bond goes beyond professional and becomes something even tighter.
“I mean, honestly, I see him more than I see my wife and kids,” says Chase. “He’s in the car with me 40 hours a week. He’s like my third child.”
Chase didn’t always want to be a patrol officer. In fact, after finishing college he thought he wanted a desk job and applied for a dispatcher position at the Dardanelle Police Department. But after a few experiences with DPD officers, he quickly realized being out there was his calling. “Riding with the guys that were on patrol there kind of got in my blood,” says Chase. “And I thought that would be an interesting career.”
Now with the Arkansas State Police for about 12 years, Chase met his four-legged partner in  2012. Pavatt actually went by another name back then, but Chase decided to change it in honor of Algin Sidney Pavatt, the first Arkansas trooper killed in the line of duty on September 26th, 1948.
Pavatt is an energetic six-year old Belgian Malinois who always seems to find focus and is eager to work. According to the American Kennel Club, the Belgian Malinois breed is “smart, confident, and versatile… a world-class worker who forges an unbreakable bond with his human partner.” That reads like the perfect criteria for grueling and sometimes dangerous police teamwork.
A typical day for Chase and Pavatt consists of loading up and patrolling the interstate. Officer Melder’s duties are to stop any cars he suspects are involved in criminal activity, namely the smuggling of narcotics. When a stop is made, Chase  grabs his hat from the passenger seat and Pavatt starts to walk circles in his cage, obviously ready to get to work. When Melder stops a car, he is sure to create positive conversation with the driver to preserve the image of police officers. “When I go and talk to them and find out their story, I do it in a way that, I hope, makes police look good,” says Chase. “I do really care about about them and what they’re doing, and I actually am interested.” And then, if needed, Pavatt circles the vehicle, searching with his incredible nose for the scent of anything illegal.
Officer Melder and Pavatt were both required to complete a 12-week training. During the training, they would usually start off with a morning run. Tracking other trainees in the woods was also a big part of the education.
Pavatt is also trained to protect Chase in bad situations. “He’s very protective,” says Chase. “But just his presence has probably kept me out of some situations, that if he hadn’t have been there, could have potentially been dangerous.”

Ericka & Luna
Ericka Auguirre-Segovia is a third-year nursing student at Arkansas Tech University. She was diagnosed with type 1 diabetes in 2017. Her diagnoses was unique because type 1 is usually diagnosed as a child and is normally genetic, but she has no family history of the disease. “When I got diagnosed the doctors told me I was lucky to have come into the hospital when I did,” says Ericka. “If I would have waited a day more my body would have shut down, and I would have dropped into a coma.”
People with type 1 diabetes depend on insulin shots to keep blood sugar stable, and many wear a monitor that alerts them whenever their blood sugar is too high or too low. Sometimes those monitors don’t alert until it’s too late. The better option: a diabetic alert dog.
Diabetic alert dogs pick up the nuanced difference in scent when someone’s blood sugar is too high or low. Ericka decided that a diabetic alert dog would be her best option. “Some people, like me for example, don’t feel symptoms when the sugar is starting to rise or fall,” says Ericka, “which can be dangerous.”
Ericka did some research and discovered that a trained diabetic alert dog usually costs around $15,000 — a sizable sum for a college student to come up with — so she decided to find a puppy and train it — mostly — herself. Ericka found Luna.
Luna is a three-month-old Shih-poo (half Shih Tzu and half poodle). Since Luna is so young, she still has a long way to go with her training, and Ericka acknowledges that she’ll need some professional help. “I’ll be taking her to a professional trainer to make sure her she has good obedience,” says Ericka, “and to also receive tips as well.”
Ericka trains Luna by taking a saliva sample while her blood sugar is either low or high, putting it on a cotton ball, hiding the cotton ball in a jar and having Luna sniff it out. By doing this repeatedly, Luna is able to distinguish between Ericka’s normal scent and her scent when blood sugar is at abnormal levels. “Some dogs are trained to start alerting at a certain number, for example 70,” says Ericka. “That’s not too low, but it’s good for them to alert before the sugar actually drops.” When a trained diabetes alert dog picks up on the scent, it will perform some kind of action to get the owner’s attention.
Luna is quirky and energetic. “She’s very playful and very sweet,” says Ericka. “She’s something else.” Ericka says Luna often acts like she knows when you’re talking about her even if you don’t say her name because her ears perk up and she gets so excited. Because she’s still a pup, Ericka isn’t able to take her to class yet, but she hopes to do that soon.

Marshall Duffey Rye & Stormy
It’s 4:30 a.m. and the sun is a long way from shining over the dewy fields, but Duffey, Stormy, and Bandit are up. And they’re ready for the long day ahead.
Marshall Duffey Rye was raised on a cattle ranch and took on his own spread in 2011. In addition to running his ranch without the help of farm hands, Duffy is a husband and father, a sale barn field representative, and is still active in the army reserves. With all of that on his plate things can get hectic. But his everyday life is made easier with the help of his cattle dogs. Duffy trained Stormy and Bandit mostly on his own with only some guiding advice from a seasoned trainer.
After working with heelers for a few years, Duffey now works exclusively with border collies. “What I didn’t like about heelers is they’re just so darn hard-headed,” says Duffy. “And these collies, all you gotta do is raise your voice at them.”
Duffey remembers how he dreaded rounding up cattle on his family farm. “Growing up it was always a major ordeal when it came time to catch cattle,” says Duffy. “Everybody would just get mad and scream and cuss and throw fits.” Now he can round up the majority of the herd in his truck or side-by-side ATV, come back through with Stormy and Bandit to catch any stragglers, and have it all done within 10 to 15 minutes.
Duffy says training a border collie for cattle work can start when the pups are around five or six months old. The breed is easier to train for livestock work because the herding instinct is already in their bloodline. The biggest issue for Duffey while training was keeping his patience. “People tell me I don’t have any patience,” says Duffy. “And I say, ‘I know I do because I haven’t used any of it.’ I have to remind myself to keep my cool because if you get mad you’ll mess a collie up and he’ll be scared of you and he won’t do anything.”
On a typical day,  Stormy and Bandit help move the cattle wherever Duffey needs them  and also point out any that may be sick. “They don’t work nonstop,” says Duffy. “But I work them enough just to keep them in shape and keep them knowing what they’re doing.” Duffey makes sure to run through commands with the dogs every now and then outside of working to keep them sharp. The command “away” tells the dog to run counter-clockwise, and “come by” means to run clockwise. The dogs respond quickly to commands and seem to take a lot of pride and joy in doing the job Duffy asks of them.
Stormy is a younger dog, happy and energetic, but also serious about her work. Her personality always shines through. “She keeps a smile on her face,” says Duffy.