Woe to Live On 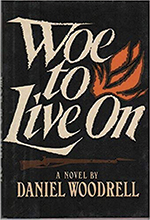 Author DANIEL WOODRELL
Every now and then you stumble across one of those books. Maybe it was suggested by a friend. Maybe you’ve read the author’s previous work and yearned for more. But whatever brings you to the book, you know within just a few pages that this is one that’s going to stick with you. A magnetic energy pulses from the words and sucks you into orbit around the story. And no matter what else is going on in your life you can’t get out.
Woe to Live On is one of those books.
I devoured it in less than a day. It was a book that demanded I find time, and I can think of no higher praise for any form of the written word. But this is what I’ve come to expect from Daniel Woodrell and why he is quickly becoming my favorite novelist. It’s why there is a fresh Woodrell novel on my desk as I type this. He’s an Ozark author from southern Missouri who grew up eating fried squirrel just down the road from Mark Twain’s hometown. And the guy can tell a story like no other.
The book is written in first person from the perspective of a western Missouri bushwhacker during the Civil War. It’s raw and gritty — you can almost taste the dust and smell the gunpowder. It speaks of gruesome acts. And it sure makes the line between good and bad seem fuzzy. But then, isn’t the line between good and bad almost always a matter of perspective in times of war?
Woodrell’s phrasing and word choices in this book reminded me of Portis’ work in True Grit and is one of my favorite facets of his writing. He perfectly captures the essence of his characters, and because they’re from my region, they seem an awful lot like me even when we’re separated by a century. The voice of a barely educated late 1800s teenager from rural Missouri comes through, and the sentiment of Jake Roedel is clear as mountain creek water even when it’s behind those colorful colloquialisms.
This is an outstanding book that boils down the reasoning behind so many poor non-slaveholding secession supporters — it was about home. It was about defending all that you knew and loved. It was about revenge and hot-blooded young men, teenagers mostly, fighting not for the blue or gray, not for slavery or abolition, but for something much simpler and much more personal.
A superlative novel. Perhaps one of the best I’ve ever read.
Facebook - Click to Share!
← Prev. When friends pass on Next: A taste of old Mexico →