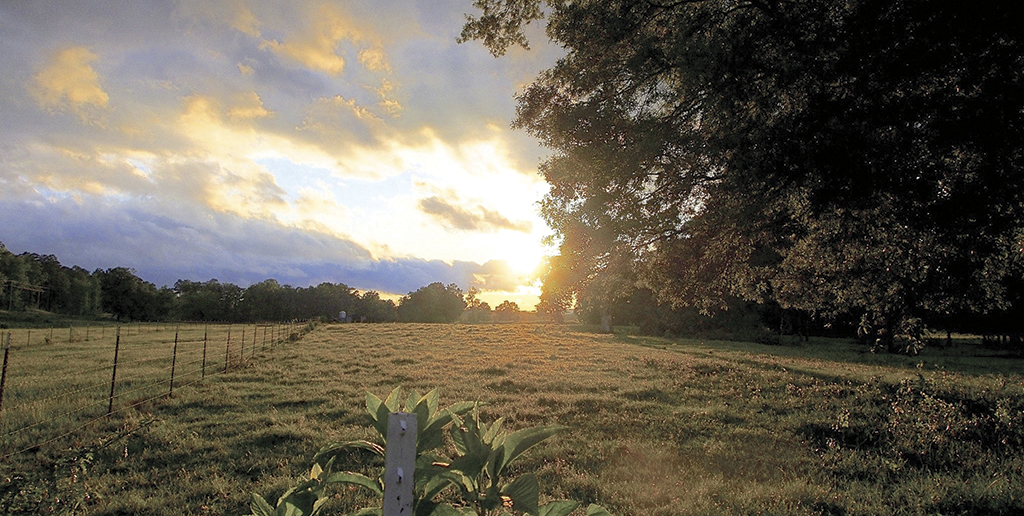 Photo by Johnny Sain
The old white farmhouse was tucked into a corner with woods on two sides. A gentle ridge dense with post oak and hickory lifted north and the woods extended west behind the house for nearly a mile. Granny and Poppy moved there when I was five. The woods held my attention from that first viewing.
Pastures spread out south of the forest with a tree-lined stream bifurcating the expanse of grass. Red cedar, wild cherry, and elm guarded the usually dry branch, and a small stock pond lined with cattails sat out in the wide open. I can still see bronze and gold flecks of sunlight sparkle and blink on the surface of its murky olive waters as a settling summer sun sinks below the horizon. The fields and the pond were my treasures. They were more than that. They were my holy places fenced in barbwire.
Rabbits hid in blackberry brambles under the red cedars and elms. With a BB gun in hand, the cottontails were in my sights as the pasture turned brown with autumn’s first frosts. As winter rolled into spring, the pond became a daily destination. March was my best chance to hook a big largemouth and the bluegill bite was steady from April through October. Hatchling red-ear sliders caught in the June shallows were pets for a week or so before releasing them back to the warm pond waters. I could roam all over the opened land at will and all by myself. Wildlife abounded, but this was tamed ground, and even way back then I somehow knew that. Regardless, I loved the pasture and pond as much as anyone could love a place; it scratched a lot of itches.
But still the woods beckoned. There was something in there among the shadows, an untamed, secretive presence that whispered to me with every rustle of a rounded oak leaf.
I wasn’t allowed to go into the woods by myself, though, not at that young age. I was given the usual warnings: I could get lost. I could get hurt. I might cross a fence and wander into an irate bull on the neighbor’s property. The grownups’ ace card — they thought — was the threat of stumbling upon a copperhead hidden in the leaves. But that just made the woods more appealing to me. The chance to see a potentially dangerous beast, a creature with latent fierceness that would stand its ground, was the embodiment of a spirit I wanted to experience. I also knew the forest was where the bobcats and coyotes lived. From the front porch I’d heard their nocturnal voices on the ridge. I knew it was where the chuck-wills-widow’s melancholy song floated up through new leaves to a glowing spring moon. I knew it was where the fat, rust-colored fox squirrels my uncle killed had scurried in the search for acorns. It was where I wanted to be. But to my everlasting credit as a “good kid,” I never ventured into the forest without an adult.
So standing just outside the woods, peering into it, searching for something I could not name, became ritual.
Post oaks, some wide as a 55-gallon drum, dominated the ridge as far as I could see. The verdant tones of spring and summer were different here compared to the fields. Chartreuse awakenings in April gave way to dark, deep, velvet greens by July. The woodline was a magical place, a place where I was caught away with the pitter-patter tapping rhythm of cold November raindrops on the forest floor. It was a place where the day-long silver fogs of winter suspended time, the world caught in standstill between day and night with the passage of moments known only by wisps of vapor folding and unfolding through gray branches and soft brown trunks. On clear afternoons, as the trees filtered beams of orange sunlight, a sweet quiet would settle over the ridge. I would forget about the railroad and highway just on the other side of those woods and imagine the oaks went on to Crow Mountain and beyond, running north to the Ozarks and even onto the legendary boreal forests of the Far North uninterrupted.
I’d often lay awake long into the night and imagine that endless forest. Details weren’t part of my imaginings. It was the forest as a whole, a vague earthy concept, a moss-covered idea with no structure, no hard edges, and no fences that intrigued me. The forest was an organism of emerald life, an unknowable wild entity. And that is why I wanted to know it.
You could say this was the wilderness experience that shaped me, my interests and values for the next 40 years.
As an adult reading Thoreau, Muir, Leopold, and Abbey, I discovered kindred souls who had words for the ineffable thoughts and emotions I had experienced when confronted with the wilderness just beyond my reach. And it surely was wilderness I both saw and imagined. They are one and the same. Any distinction between the real forest of my youth and the wilderness of my youthful imagination was dissolved long ago. Likely, that distinction was never there.
Facebook - Click to Share!
← Prev. Don't be a sucker Next: First Security Bank →