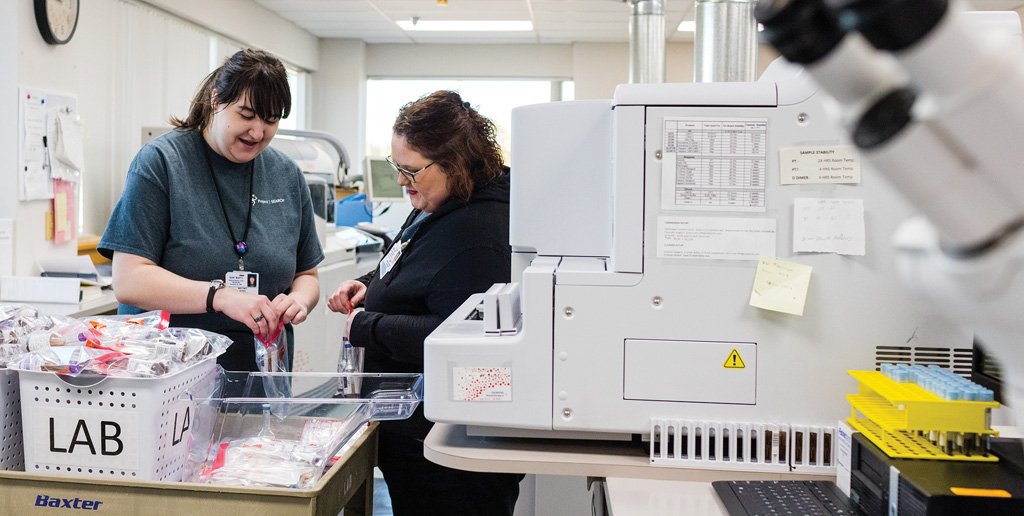 Project SEARCH began in Russellville in 2017 when Jim Davidson, CEO of Saint Mary’s, was approached by the late Dr. Finley Turner. Dr. Turner was active within Friendship Community Care, which plays an integral role in the success of the program.

Jim was intrigued by the idea when it was first presented. The cause is close to his heart. “My mother was a special education teacher, and so I can remember as a boy just spending a lot of time with special needs kids and not thinking twice about it,” Jim says. “It was just the world that my mother lived in, and she brought me into that world. When I look back on it, I feel as though I’ve gained something of value from having that experience in my life.”

But the program and Saint Mary’s, under Jim’s relative newness in his position of leadership, was out of synch.
“Initially, when they approached me it was early on in my career here, and it just wasn’t quite the right time,” Jim says. “Some months passed, and they approached me again, and I felt like that was an appropriate time to consider the program.”

Project SEARCH is an international internship program for adults with disabilities based at Cincinnati Children’s Hospital Medical Center. Russellville’s chapter is made possible by Friendship Community Care, Arkansas Rehab Services, and Saint Mary’s Medical Center. Participants in Project SEARCH are taught how to succeed in the workforce and gain valuable work experience through their internships. The group consists of interns ages 18 to 35, and participants have a wide range of internship opportunities to choose from including engineering, environmental services, accounting, and medical services. “We’re constantly trying to add new areas and we are working on adding more right now,” explains Sarah Ketchum, Friendship’s service coordinator for Project SEARCH.

When Jim decided to bring the program to Saint Mary’s, he called on Connie Gragg, Saint Mary’s human resources director and Project SEARCH liaison, to take the reins. “The importance of this program is that it has the potential to not only change the intern’s life but the family’s life as well,” Connie says. As a mother of someone with special needs, Connie understands the struggle of the families and how challenging it can be.
The program usually takes about six to ten participants, although there is hope for bigger numbers in the future. From August to December, participants complete internships. From 8 a.m. to 3 p.m. their time is split between the classroom and the internship itself.

Classroom time is used for group lessons covering topics such as communication, socialization, and resume guidelines. At the beginning of the program, interns are provided with job skills trainers who accompany them during their internship. “They’re there to just help them with learning the new task until they get the hang of it,” says Sarah. At this point in the program, the goal is to get the participants into a new environment where they can explore opportunities they’ve never been offered before. “I want to push them,” Sarah says. “I constantly want them to try new things and learn.”

From January until their graduation in May, the interns are given opportunities to job shadow at different businesses within the community. “If they’ve told me they really want to work in a daycare, I’m gonna go out and try to find them a daycare that they can job shadow in and see if that’s really what they want to do,” says Sarah. By this time, the participants are more aware of the type of job they might want to pursue, have tested their skills, and know their strengths. All of this gives them more confidence going forward.

Sarah uses this time to conduct mock interviews. She’ll ask people, who the interns aren’t familiar with, to come in and interview the interns just like a potential employer would. “If I were to do a mock interview with them, I don’t know that they would really be that nervous or get that feeling of how it really is when you go in for an interview,” she explains. The majority of the interns who graduate from the program go on to find gainful employment within the community. Even after they start their new jobs, their job skills trainers will work with them through the summer or until they feel they are not needed anymore.

The program is assisted by a steering committee that is made up of different people within the community. The committee meets once a month to keep things on track and plan goals for the future. Along with the steering committee, there is also a business advisory board composed of representatives from different local businesses that offer support. 

“There is someone from Firestone on our committee, and they work so well with us. We actually were able to do a tour with them last year and see how a factory really was. Some of them [interns] had never stepped foot in a factory, so it was good to let them be able to do that.”

The beauty of this program is that it provides support for members of our community that are normally not given a chance. “I think it’s a program that seeks to find a spot for folks who otherwise may be forgotten or cast aside because of some preconceived notion about their limitations,” says Jim. “Instead of someone from the outside imposing a limitation, we create an environment where they get to tinker around a little bit and find a place where they can find fulfillment and satisfaction.”

This program is an environment that pushes interns to accomplish objectives that even they didn’t believe they were capable of. “In the first class, one of the students went to school to become a certified nurse’s aide. She liked the feel of the healthcare industry. She went off and pursued that and I think she’s achieved it actually,” said Jim.

Everyone involved in this program is extremely dedicated. Through partnership and passion, they are able to make an enormous impact on people’s lives. “The wonderful byproduct, that you can’t really quantify, is the way this thing really brings out the best in our staff because it connects us to our purpose to make our communities healthier,” Jim says. “And that doesn’t always come in the form of a prescription or a surgical intervention.”

← Prev. Hope, Help, and Healing Next: The Historic Love/Stubbs House →