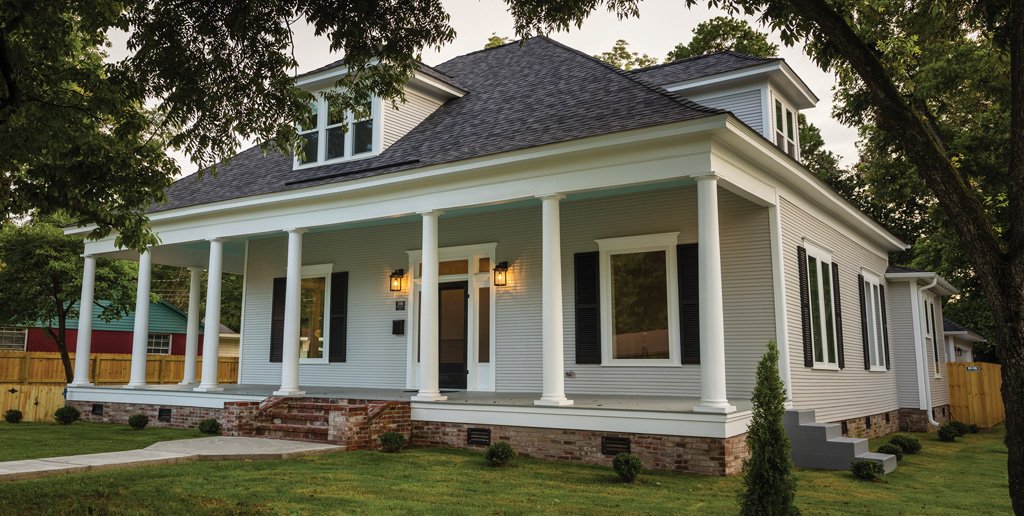 The Love/Stubbs House house was built in 1915 by David Crocket (D.C.) Love. Mr. Love (1845-1930) was a wealthy Carden Bottom farmer who amassed major land holdings in the Dardanelle Bottoms. His half-brother, Dr. L. E. “Ed” Love, was a graduate of Washington University, did post-graduate work at Mayo Clinic, practiced medicine in Dardanelle for 43 years, and had extensive farming and mercantile interest with his brother-in-law, Judge T. E. Wilson of Dardanelle.

D. C. Love was one of the wealthiest men in Yell County. After his wife’s death in 1917, his youngest child, Kathryn Love Harmon (Mrs. Haynes Harmon) and family also resided in the house. After D. C. Love’s death, the house was purchased by Dalton Stubbs (1888-1977) and Mary Ellen Hames Stubbs, owners of Stubbs Insurance Agency in Dardanelle and was passed on to their son James Lee Stubbs (1913-2000) and Donnagean Dutton Stubbs who owned Dardanelle Insurance Agency. During the early 2000s, the house passed through several different owners and by 2018 was a derelict property sorely in need of restoration.

Dr. Diane Gleason purchased the property on August 31, 2018, and immediately began a complete overhaul. Mr. Kenneth Cain and his able crew of skilled craftsmen along with numerous sub-contractors spent 11 months restoring the house. The house today contains many of its original materials and its original footprint, although, a new over-sized garage has been added.

Dr. Gleason’s primary goal was to save this stately piece of Dardanelle’s material history and culture and allow the property to again be made beautiful and have continued life. Dr. Gleason sold the restored property on August 1, 2019 — the historic Love/Stubbs House has now started a new era as the Tarver/Marquez family home. The new owners moved into the home shortly thereafter and will, hopefully, assure its future as a well-loved and beautifully maintained private residence.

Restoring these types of structures in Dardanelle helps the town maintain its identity, cultural heritage and furthers its future. It is hoped that the citizens of Dardanelle will enjoy seeing this restored property, that it will inspire other citizens to improve their own property, and improve the appearance of the community overall.

Dr. Gleason would like to thank Kenneth Cain and his team of skilled carpenters, Danny Kirby & Kirby Specialists Corporation, and a large number of skilled tradesmen without whom this restoration would not have been possible.