A Cornerstone of Faith and Community 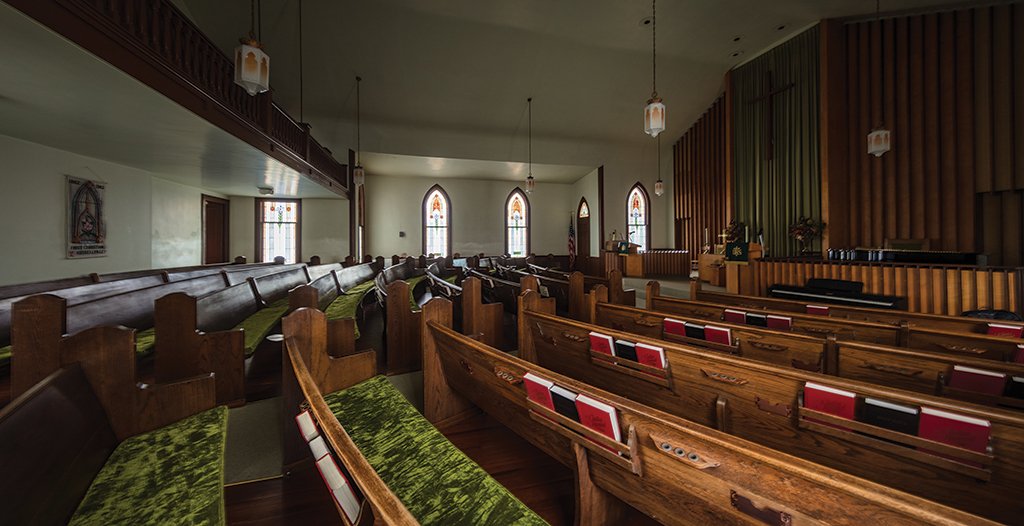 The First Christian Church (Disciples of Christ) blends the history of religion, community, politics, and education throughout its 135-year history. Members of this church have enriched our community by reaching beyond the religious services and giving their time, assets, and talents where they were needed. Many of their iconic members’ names shine down from the stained glass windows in the church, buildings in downtown Russellville, and at Arkansas Tech University. This tradition of reaching beyond the church and into the community continues today.

A fledgling religion roughly formed in 1832, The Christian Church (Disciples of Christ) is one of three religions associated with the Stone-Campbell movement which began in Kentucky and West Virginia. Frontier Americans desired freedom and simplicity, unity, and practicality. They hoped for a new approach to religion that would free them from European church structures, which weren’t meeting their needs. They felt they could read and interpret the Bible for themselves and build faith on reason. Today, the Christian Church (Disciples of Christ) is one of the largest churches founded on American soil with more than 850,000 members in nearly 3,900 congregations across the U. S. and Canada.

The religion came to the frontier West in the form of revivals and camp meetings of non-denominational Christianity. It arrived in northern Arkansas with an evangelist named Elijah M. Northrum who served as the Arkansas state evangelist beginning in 1859.  Mr. Northrum organized the church at Russellville. A congregation of 57 members met at the Masonic Hall and voted for elders and deacons in 1882 with 22 of the original charter members named either Shinn or Harkey. The group met at the Masonic lodge for the next four years.

The Structure
Located at 103 South Boston in Russellville, the First Christian Church began as a single-story wooden structure based on a cruciform plan in 1885. Jacob Shinn and his wife Martha owned the property where the church was built and after the construction loan was paid, they deeded it to the church in 1889. The property had formerly been a grove of trees where the congregation enjoyed picnics.

Renovations have been done with minimal changes to the original sanctuary of the church building, with its rounded stage surrounded by pews. A baptistery was added in 1896 after the initial construction. Prior to that, members were baptized in the local ice factory’s water tank. A church annex was built in one day in 1916 by the men of the church.

The building was bricked and remodeled with a Gothic Revival exterior in 1925 with arches and 14 stained-glass windows. Each window was purchased by individual members and Sunday school classes at a cost of $48 each.

Electronic chimes and an amplifying system were added on the roof in 1952 but were later removed, an an educational annex was added in 1954. The last change to the church building was interior remodeling in the 1960s.

First Christian Church was listed on the National Register of Historic Places in 2006 as having “local significance” and for “being the oldest active church building in Russellville” according to the historical building application.

The Members
The first pastor of this church was George W. Harkey in 1885, who had attended seminary school in Texas and was also a medical doctor. He joined the church in 1852 and organized the first Sunday school. Harkey preached at various locations beginning in 1882 and until his death at 85 in 1915. An unusual feature at front entrance of the church is a memorial plaque in honor of Harkey. It sits on a horse hitching post next to a large rock. The plaque says “In 1885 Rev. G. W. Harkey the first minister had to step on this rock to mount his horse. Many of his family have been long-time supporters of this church.”

A significant event happened in 1934 when 59 new members were added to the church in a one-day revival, believed to be the first in Arkansas, according to the church historical records. The Reverend Leslie G. Smyth, pastor of the First Christian Church, came to Arkansas from Oklahoma. Despite doubts of current members and a downpour of rain, he hoped to convert 50 new members. According to the church’s historical records, “he received offers from publishing houses for a book he was writing, “Revival in a Service” and stacks of letters asking how he did it. The Reverend Smyth studied psychology at Texas Christian University.
Thirty members of First Christian Church served in the Armed Forces during World War I, from a congregation of 150.

Eighty-one members of First Christian Church served in the Armed Forces during World War II, from a congregation of 300. During their absence, many of the leadership positions in the church were filled by women who had not previously been given the opportunity to perform those duties. However, it wasn’t until 1972 that the first female elders and deacons were elected.

Reese Caudle (1888-1955) served in the Arkansas House of Representatives from 1923-1928. He was a supporter of the Dardanelle Dam project and testified before Senator McClennan. The Caudle Building is located on W. 2nd Street downtown Russellville and is dated 1947.

John E. Tucker (1901-1983) served as head coach at Arkansas Tech University from 1933-47. He is responsible for ATU’s nickname when as a 17-year-old-freshman he scored two touchdowns and kicked two extra points in a 14-0 upset against Jonesboro. For the effort, he and his teammates were referred to as “Wonder Boys” and the nickname stuck. Tucker served in various roles at Arkansas Tech including coach, athletic director, director of student affairs, and teacher. Two buildings on campus are named in his honor – Tucker Coliseum and Tucker Hall. He was inducted into the Arkansas Tech Hall of Distinction in 1965.

W. O. Young (1896-1941) served as business manager at Arkansas Tech from 1917-41, and interim president from 1923-25. He was a member of the first class to receive bachelor’s degree from Tech in 1925. Mr. Young owned the original Jerry the bulldog, the school’s mascot in the 1930s. He was inducted into the Arkansas Tech University Hall of Distinction, and the Agricola yearbook was dedicated in his honor in 1924, 1925, and 1942. He is the namesake of the Young Building.

L. L. “Doc” Bryan (1920-95) served in the Arkansas House of Representatives from 1967-95. He was an Arkansas Tech University Alumni who championed the cause of Arkansas Tech and higher education. He was influential in securing building funds for several buildings at the college. He is the namesake of Doc Bryan Student Services Center.

Former minister Thom Walker was actively engaged in mission in Mexico and Central America through this ministry at First Christian Church (1996-2003).

The First Christian Church meets its members’ spiritual needs, maintains an optimistic outlook about the future, and respects the church’s past accomplishments. Active members still include many descendants of the original 57 members who founded the church.

Bill Newton, owner of Newton’s Pharmacy, was raised in this church. His family has belonged to the church through multiple generations. Even Bill’s extended family has ties, and his aunt Martha Newton is the oldest member of the church at 99. His daughter is a First Christian Church minister in California. “It just makes me feel good to walk in the door. The church has been my anchor in life. The early shakers and movers were members of this church. When I sit below the stained-glass window with J.L. Shinn’s or any other founding member’s name on the plaques, it’s always a good feeling to know I was in the presence of these community icons.”