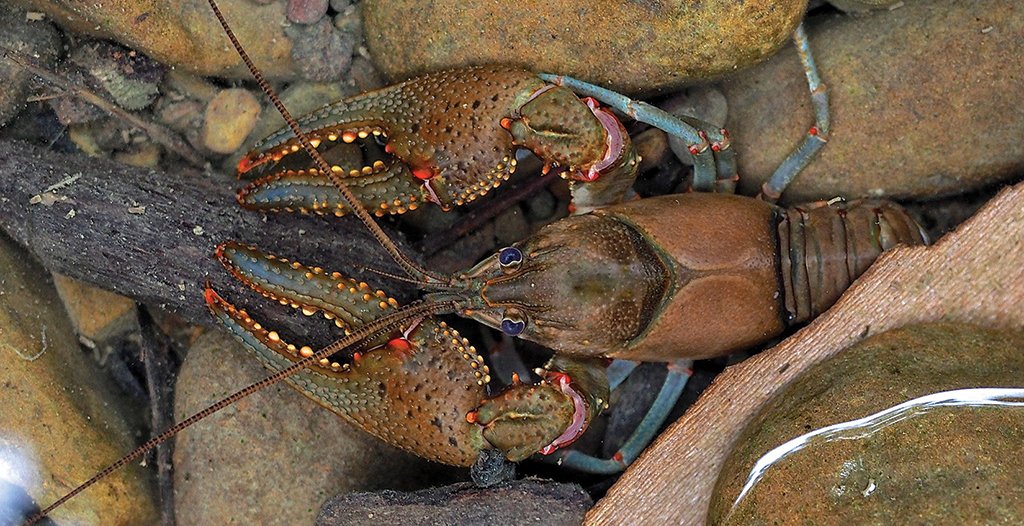 The most humble of waters call to me. Chocolate-milk-colored seeps and tinkling rocky rivulets no wider than a long stride are the most persuasive. I know the denizens of those tiny waters, and they call as well. They whisper of a time that seems not long ago when all I wanted could be found at the end of a long dirt driveway or just beyond the next creek riffle.

A fondness for crawdads might seem odd for a boy born and raised in the River Valley and southern Ozarks of west-central Arkansas—crawdads are, after all, the totem of Louisiana folk—but maybe a Natural State upbringing is why my appreciation for crawdads goes beyond the palate. I caught thousands before I ate my first one. I caught them for a closer look in an old pickle jar. I watched the swimmerets churning under their tails. I watched the multiple mouth parts in action as I fed them worms. I watched them because they fascinated me. And then I set them free. While untold summer hours of my childhood were spent ankle deep in a ditch, creek or pond, there is no crawdad-catching genesis in my story. Like Mom and Dad, the Razorbacks and the Bible, crawdads are immemorial.

As I recall, the winding ditches alongside Bells Chapel Road near Atkins carried the aroma of quintessential rural Arkansas summer—a complex mix of fresh-cut hay, mimosa trees, manure and mud. And the ditches were crammed with crawdads. My cousin Robert and I made daily expeditions through the Johnson grass and tickseed, hunting for pools of relative clarity and unsuspecting crawdads. With quarry sighted, the crawling stalk began until we were close enough to slip a hand toward the segmented tail—always the tail because even the smallest claws were menacing. Success was a flapping mad dad pulled from the water with our fingers safely behind those pinchers. Our crawdad-catching repertoire was basic, and a capture was rare. But during my ninth summer of life, we would learn new methods peculiar to different environments and situations. And my relationship to the crawdads evolved as well.

The biggest revelation was when our uncle Terry demonstrated that a crawdad pinch didn’t hurt all that much. As he followed us down the ditch one hot summer day, Uncle Terry asked why we passed the deep holes because they surely held some whopper mudbugs. We told him about the feared “blood pincher” crawdads, the big ones with red-tipped claws that could nip a plug from our fingers. He guffawed, said something about no nephews of his being scared of a crawdad, then proceeded to reach shoulder deep into a nefarious-looking mud hole and feel around with predatory focus emanating from eyes to digits. Soon, a wide smile cracked through his deliberate expression, and awe clutched my gut as he lifted his hand from the mud. Falling globs of muck revealed a giant claw clasping his pinkie finger like a miniature vise with Uncle Terry’s grinning mug as a backdrop to the dangling crawdad. With this knowledge, catching deep-hole crawdads was a doable, though gritty, endeavor.

In contrast, catching mountain-creek crawdads, like the ones we found in the moonshine-clear Illinois Bayou and its tributaries near Hector, was almost mystical. With the flip of a rock, I could witness magic as the silt vanished in crystal current and a form materialized: a brick-red crawdad with fire-tipped claws highlighted in teal, a dazzling beast as compared to the plain-brown ditch variety. My young mind had never reckoned there were different types of these creatures, but here was distinction ushered by eons of tectonics and water bringing change to the land. Vibrant, yet cryptic, shades grew in intensity with every second as the water cleared. Then there was this magnificent and alien creature within my grasp, an ancient soul holding secrets that I would never be old enough to know but desperately wanted to learn.

I still yearn for those secrets.

Those summers have since evaporated, leaving only muddy trails of memories, but the crawdads are still part of my soggy, warm-weather pursuits. Inspired by Hemingway’s “Big Two-Hearted River,” I’ve fished for smallmouth bass with crawdads caught as needed for bait. I’ve also pushed aside the smallmouth and enjoyed the crawdad as a meal, with my daughters, a nephew and a niece helping to fill the pot on camping trips. After all, passing on crawdad-catching tactics to the next generation is a family tradition.

Crawdads gave me a sense of place, a more intimate understanding of my home and the natural forces toiling beyond our perception that shape nature. They’ve helped me hold on to a sense of wonder every time I see semiferal puddles or a wild backwoods creek. But mostly, they take me back to a simpler time when my only concerns were pinched fingers and getting back to Granny’s while supper was still warm.l