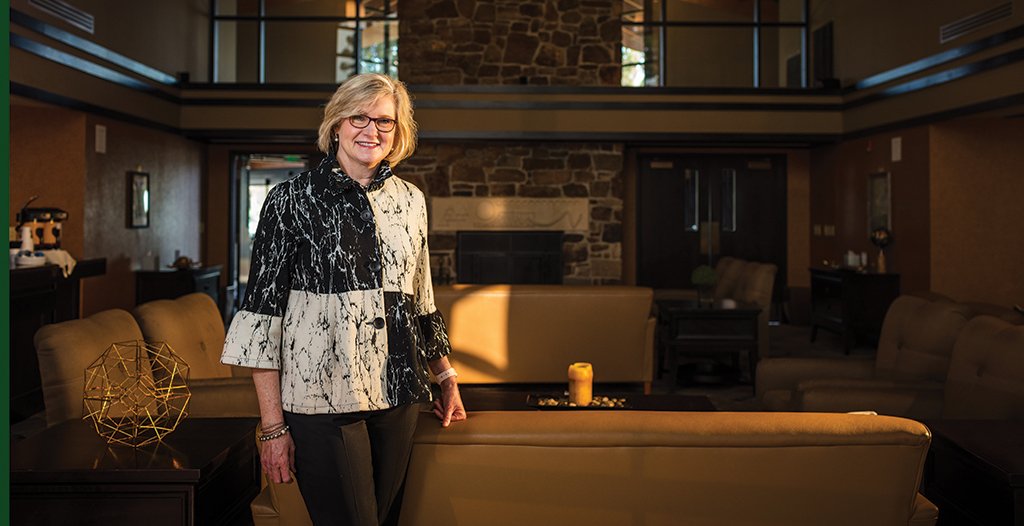 Looming like a sentinel over the Arkansas River, Petit Jean Mountain’s broad plateau offers fantastic vistas, intriguing folklore, a state park, and is also home to the Winthrop Rockefeller Institute. Executive Director Dr. Marta Loyd has led the Winthrop Rockefeller Institute since 2014, finding ways to utilize the organization in making significant improvements around the state.

Marta’s original career plans were much different from what she is doing today. She graduated from the University of Arkansas for Medical Sciences (UAMS) in 1982 with a bachelor’s degree in dental hygiene. Marta spent 15 years in that field before her ambitions led her in a new direction. “I just wasn’t fulfilled. I felt like I had something else to offer,” she says.

Accepting a position at UAFS allowed her to help with the growth of the university. She was part of the team that transitioned the school from a community college to the four-year university that it is today. That same year, Marta became the vice-chancellor of university advancement. As vice-chancellor, she was responsible for fundraising and marketing, a job that honed her networking skills. “During my time there, I had the opportunity to work with a lot of generous people and leaders in the community,” she says. Her efforts raised the endowment from $20 million to $80 million. Marta also helped to create the university’s alumni association. “They did not have an alumni association when I came to work there, they’d never had one as a community college,” Marta says. “So I led the effort to start one.”

Even after her professional successes at UAFS, Marta felt she could push toward loftier goals. “I was at a place in my career where I felt like I wanted to do one more thing,” she says. While seeking new challenges, it was suggested that she pursue the chancellor position at a university. But Marta wasn’t sure it would be a good fit. She was looking for something that was a better complement to her skill set.

Marta had driven up Petit Jean Mountain and visited the Winthrop Rockefeller Institute on business trips. “I loved coming to the mountain and the idea that up here you can kind of leave the world behind and face the task at hand,” Marta says. She describes it as an ideal environment to build productive relationships and accomplish significant work. When her husband told her that the executive director position was open, Marta knew that she needed to apply. “All of the experiences that I’ve had and the opportunity in leadership at the university had prepared me for this,” she says. By this point, Marta had earned her doctorate in educational leadership. That, along with her networking and organizational skills, made her a prime candidate.

The Winthrop Rockefeller Institute’s official mission statement is: “We continue Winthrop Rockefeller’s collaborative approach to creating transformational change.” Winthrop Rockefeller came to Arkansas with the intent of making a valuable impact on the rural areas of the state. Since her hiring, Marta has become a student of the late Arkansas governor and namesake of the Institute. “He really appreciated working alongside the common man,” Marta explains. “He appreciated and understood the value of his family name and he loved Arkansas because he was able to bring his name, his wealth, and his collaborative problem solving skills to a place where he felt like he could really make a difference.” The focus of the Institute is to solve the problems impacting Arkansas using Winthrop’s inclusive approach. “He always believed that you couldn’t solve a problem unless all voices were at the table,” Marta says.

One big issue that the Institute has taken on is the rural health crisis across the state. Three years ago, Marta was approached by the Chair of Regional Programs at UAMS at the time, Dr. Mark Jansen. Dr. Jansen wanted to address the lack of medical care available in some parts of the state. “New physicians are not moving to the rural communities and physicians currently living in rural communities are retiring,” Marta says. Six counties in Arkansas do not have a doctor.

The Institute ’s approach to this issue was to unite organizations such as the Arkansas Department of Health, Arkansas Hospital Association, Delta Dental, and several more that were already working in the area of rural health. The Institute organized a summit for the organizations where agreement on primary goals and specific steps needed to attain those goals was reached. More than 60 participants attended the first summit. “We like to bring diverse viewpoints together,” Marta says. “So with all these people that were working in rural health, some of them could have been working together but didn’t realize they had common goals until they convened at the summit.” After three years of work, the coalition received a federal grant of $100,000 from Health Resources and Service Administration grant to form an organization solely focused on rural health in Arkansas. “What they’ve recognized is that there should be someone that wakes up every day thinking about rural health and the challenges and the opportunities,” Marta says. >>

Another project of the Institute is called Beyond Civility. This program brings in high school students from Arkansas communities to discuss the importance of respectful dialogue. The values of Winthrop Rockefeller himself are used to teach students how to have conversations with people who share a different opinion. “We teach them that it’s okay to disagree. And we teach them how to respect how the other person’s viewpoints are formed and why they feel the way they do,” Marta says. The program has been extremely popular.

Of course, there are challenges in Marta’s line of work. The biggest of which is deciding what problems to tackle. “There’s no shortage of issues that come our way that people feel we could be instrumental in helping with,” Marta says. The Institute uses a rubric to determine what projects they will act on. They question the issue’s importance and to what capacity they can help. “I tend to push too hard and too fast, so that’s one of the things I’m working on now is trying to be realistic about what’s possible,” Marta says. She is also focused on recruiting and retaining employees who have a passion for the work. She needs dedicated people who truly want to make a difference… and who are willing to make the drive up Petit Jean Mountain every day.

One of the most captivating things about Marta is her optimism. “I’ve always looked at hardships and try to find a way to grow from them or find a way to become stronger,” she says. In 2008 Marta was in a head-on collision with an eighteen-wheeler. Her car was completely totaled, but Marta walked away unscratched. It was a miracle. “I think that experience was probably the one defining moment where I stepped back and reexamined my life and really evaluated what I was doing,” she says. “I remember that and use it to give me strength and move forward because I believe there is a reason I’m still here.”

Marta also shared one of her children’s struggles that impacted her as well. Her youngest son Bryan was born with bilateral club feet, and at the time, the ultrasound equipment was not able to detect it before birth. Bryan went through a series of surgeries and fully recovered but had another setback at age six when he lacerated his cornea. Bryan recovered from both challenges, but having an injured child definitely takes a toll on a mother. “He made a deliberate choice, even as a child to not give in to those challenges, but to be a leader. I learned a lot from him,” she says.

Marta says that her success can be directly credited to her people skills. “I’m really a peacemaker and a problem solver by nature,” she explains. “I am good at bringing people together around a table, talking through things, and helping people solve their own problems.” Marta’s success has earned respect for her work across the state. “Because of the network that I’ve built and the organizations that I’ve been able to be a part of, I have built up some trust through the years,” she says.

The Winthrop Rockefeller Institute is flourishing under the direction of Marta, and their work will impact our state for years to come. “I’ve just always had this pull to make a difference, to be a part of something that will outlive me,” Marta says. She has most definitely found her niche in helping make Arkansas a better place.l