The path is the destination 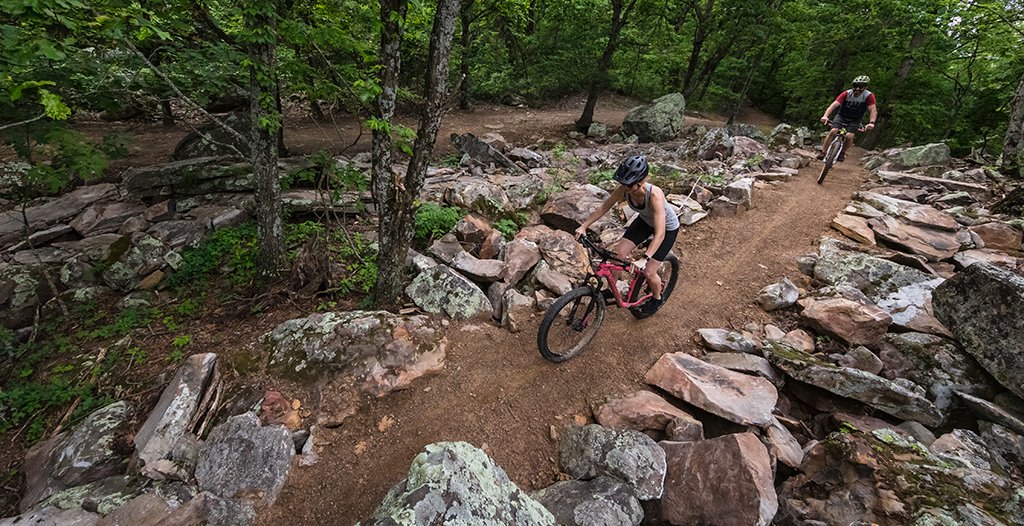 Back in 1953, before he became a sociology professor at the University of California Davis, John Finley Scott built a bicycle that could withstand his off-roading adventures. It featured multiple gears specifically configured for off-road cycling and was shod with burly, knob-studded tires. Scott called his creation the “Woodsie.” Even with his state of the art design (for back then), cycling over rough terrain didn’t gain much traction until the early 1970s when a growing group of enthusiasts helped spark the hobby of mountain biking. But its utilitarian roots could never have anticipated the emergence of “dirt-church” on Sundays and post-work group rides.

The passion for recreation geared toward physical challenges and fitness along with an explorer’s spirit is what led to the boom of mountain biking as a hobby throughout the nation. “No matter how many times you’ve ridden, there’s always something you hadn’t seen before,” says Logan Felder, a River Valley trail cyclist.

That passion also led to the creation of the Monument Trails in Arkansas.

The Arkansas State Parks website says that “Monument Trails are world-class mountain biking destinations within Arkansas State Parks that showcase natural iconic beauty, innovation, and sustainability.” The multi-use trails are built with trail riders of all skill levels in mind but also with an “adventure-minded approach.”

For physical construction of the Monument Trails, the partnership called on the nation’s most innovative trail builders to design and construct interesting paths utilizing Arkansas’s distinctive terrain and topography. The first Monument Trail in the state winds around the shores of Beaver Lake in northwest Arkansas’ Hobb’s State Park and was opened in June 2019.

But since the River Valley is the hub of Arkansas’ mountain bike trails, it made sense for the newest trail to be homed in one of the regions most iconic state Parks — Mount Nebo.

Lush green forest, brilliant wildflowers, and the soft babble of running waters await cyclists and hikers on Chickalah Loop, the first Monument Trail mileage added last fall near the bench on Mount Nebo. Named after a local creek with tributaries in the northern section of the park, this is an intermediate trail with expert features (that you can go around, without any judgements) running 7.1 miles. The trail opens areas that were formerly inaccessible to the public and offers new angles to see the sparkling valley along with peaks to watch the sun both rise and set.

Utilizing the landscape and prior use of the parks was integral to the Monument Trails’ development. “The project feeds on current visitors’ experiences and builds on it,” Suzanne Grobmyer, executive director of the Arkansas Parks and Recreation Foundation, says.

Suzanne says that Mount Nebo has been a recreation destination in the region for well over a century and that it “creates a beacon for outdoor recreation in our state that highlights health and wellness, not just for visitors, but those who live in the surrounding communities.”

Mount Nebo was named for the biblical mountain where Moses viewed the promised land. Summit Park Hotel, with room for 450 guests, helped spike the attraction back in 1889. Outdoor activities such as lawn tennis and bowling were part of those early days and created a heritage of recreation that has only grown stronger as the decades passed.

With this history of enjoying the outdoors, breathtaking scenery, and challenging terrain, Mount Nebo State Park seemed a natural fit for the second Monument Trail system.

“Each Monument Trail is a standalone destination,” Suzanne says. “Each trail is a complete thought, a trip worth taking.” A large portion of what makes a destination for outdoor recreation is the surrounding communities. Local cities, along with River Valley cycling organizations, ensured that the sense of community among area citizens is extended through the new trail system.

Suzanne says that the theme of sharing and helping, so integral to the Monument Trails project, runs strong in the River Valley. “The biking community in Dardanelle and Russellville have been amazing partners,” Suzanne says. Organizations like Ozark Off-Road Cyclists and Friends of Nebo have helped maintain the trails with the park’s own team. Suzanne says that local clubs also help on website pages with almost daily updates and weather conditions, bike tips, group rides, and other information. “It’s been the ideal community embrace we hoped for,” Suzanne says.

That sense of community can be found on trail as well. Logan Felder says he generally rides the trails solo, but, more often than not, he runs into someone he knows. “You meet them on the trail,” Logan says, “and then ride with them for a while and talk about what’s been going on in your lives until you separate onto different parts of the trail.” Company on the trail is a good thing in many ways. It means there’s usually someone to help if you’re having trouble. Since he’s a mechanic, Logan often stops to help others in need, whether it be fixing a chain or supplying a new one. Logan always has a spare chain. But Logan says that helping hands are everywhere on the trail. “If anyone has a crash or something , everyone will stop to help and give spare parts.”

Chickalah Creek Loop is a multi-use trail in that cyclists as well as hikers are welcome to enjoy it. “Shared use trails are the veins which create meaningful experiences in the parks,” Suzanne says. But sharing also extends to the municipalities and businesses. With Monument Trails designed as destination points for in- and out-of-state tourists, local economies will benefit as well. It’s a holistic approach to creating a better place to live overall, and that theme can be found in the heart of the Monument Trails project partners. “Collectively, we have a passion for this work and what it does to transform quality of life in our state,” says Suzanne.

Russellville cyclist and Carr’s Chain Reaction bike shop manager Johnny Brazil believes that the Monument Trail System atop Nebo will have a profound impact not only on the cycling industry, but on the region as a whole. “Our business has already seen increased levels of interest and stoke towards mountain biking due to the growth of world renowned trails in our state,” Johnny says. “That has been amplified recently with these trails.”

Johnny says that while he’s excited about the opportunities for economic growth, he’s ecstatic about what the trail is doing for the local cycling community. “The trail has increased cycling awareness, other local trail opportunities, and led to conversations about alternate means of transportation via greenway systems,” Johnny says. “It’s led to forward thinking that is progressing our communities.” Johnny believes that the newest trails atop Mount Nebo will be a major tourism attraction for the River Valley “The system is incredibly inclusive and provides opportunities for a family of any age and skill level to enjoy,” Johnny says. “From a trail that is balance-bike and beginner friendly to double black-diamond gnarly descents, it’s sure to please a rider of any level.”

While the Chickalah Creek Loop has been open since the Fall, an additional 18 miles will officially be open to riders and hikers no later than June 10th. This newest mileage includes a dedicated uphill path for hikers/walkers that wish to ascend up the mountain as well as blue/green miles that are rideable by all ages and skill levels.

“There isn’t a community in our state that isn’t looking at trail expansion in their town right now.” Suzanne says, indicating that many more trails will be popping up for our hiking and biking enjoyment.