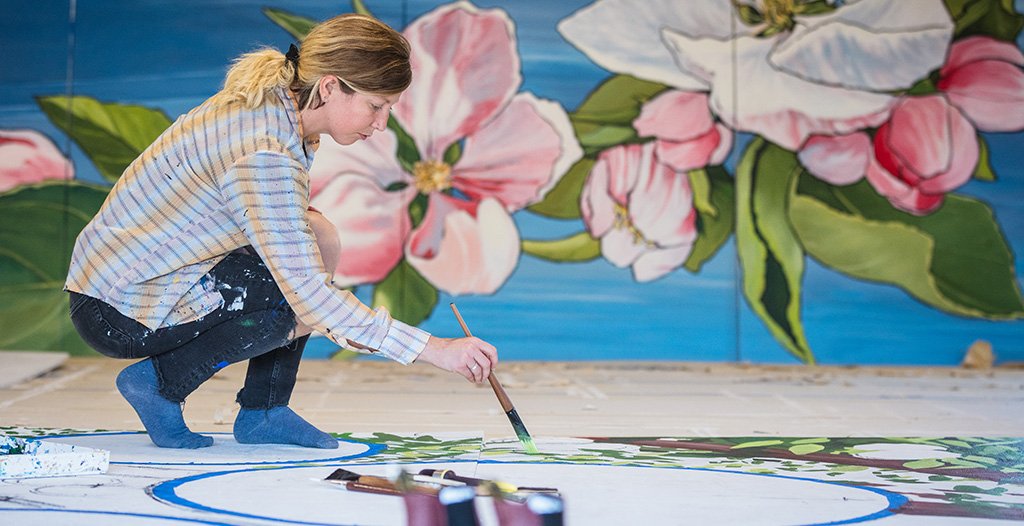 Tiffany Black left her home in New York for an artist residency at Arkansas Tech University with one thing on her mind: An opportunity to create community art.

But what is community art?

“I’m a painter and a mural artist,” Tiffany says. “And, wherever I can, through design or the actual painting, I like to open up the process to collaboration. I like to involve other people, and for me, that’s how it all takes shape. I get a lot of fulfillment from making art in that way, rather than isolated in a studio somewhere.”

Tiffany, 33, is originally from Danville, Indiana, where she earned a Bachelor of Arts degree from Hanover College. She went on to earn her Master of Fine Arts from the Maryland Institute of College Art. Back home in New York, Tiffany works in set design. She’s worked on shows like Manifest, Younger, The Loudest Voice, Dickinson, High Fidelity, and others.

While in residency at Arkansas Tech University, Tiffany taught an intro to drawing class. But her passion is for less commercial endeavors — for murals, specifically.

“I’ve always been drawn to painting on a large scale,” she says. “I like the physicality of it. You have to use your whole body, and it’s in a public space so it almost becomes like a performance. It has a huge capacity to transform entire spaces, and I like that.”

“It’s something I think a lot about,” Tiffany says. “Murals have to do with our relationship to our environments. They have to do with beautification. It shows a place is well cared for, and they have a big capacity to inspire. Maybe it becomes a part of the background when you see it every day, but at a subconscious level something is still happening.”

Tiffany arrived at Arkansas Tech University in January, the school’s second artist in residence in school history. Soon she announced her first community project — a mural painted on wood panels to be displayed in downtown Russellville. Tiffany had planned the mural for community involvement where locals could stop by to throw up a few dabs of paint and help contribute to the finished project.  She didn’t just want the mural to beautify downtown Russellville. She wanted locals to feel like the mural was their own because they’d helped create it.

“We were going to have a paint party with this mural,” Tiffany says. “We were going to let people help paint by preparing it as paint by numbers so that we could scale the design up to 32 feet long to 16 feet high.”

Then the coronavirus outbreak struck and everything changed.

For Tiffany, the project remains community-based and is “almost ready,” although, she had to scrap some of her plans along the way. To still enable community involvement in the mural’s creation, Tiffany utilized ATU photographer and ABOUT magazine photography editor Liz Chrisman to collect images that represent the area. Locals then voted on which ones made the mural. Voters decided on a view of Lake Dardanelle, apple blossoms, and a jumping bass.

”It’s designed to express the spirit of this area,” Tiffany says, “and my hope is that this image will inspire people to be connected to where they live and to be proud of where they live.” Instead of the event Tiffany originally planned, she came up with another way to involve the community, and that’s with a food drive and another mural.

Tiffany says she partnered with River Valley Food 4 Kids, a local nonprofit that fights food insecurity in children, and is planning a second mural on the side of their building at 407 North El Paso Avenue in Russellville. To involve the community on that one, Tiffany says she asked kids to submit drawings of their own favorite foods to become part of the mural.

Tiffany described the process of physically creating a mural: First, you select and design the image in a small scale. Then you blow it up to the size of a building wall. Tiffany doesn’t use a projector like some artists. Her preferred method is using a grid.

“A one inch square on the original may translate to one foot on the mural,” she says.

The River Valley Mural is being painted on separate wooden panels which will be attached to a wall in town. The mural was originally planned for 203 North Commerce in Russellville, but Tiffany says its location is now undecided.

Not only did the coronavirus outbreak interrupt Tiffany’s plans for her mural, it also has prevented her from seeing her family, who were planning to visit her in Arkansas. When her residency ends in July, she says her first stop will be Indiana to see her parents.

“Then I’ll head back to Brooklyn where, hopefully, they are still making TV shows,” she jokes.

The coronavirus has also led to a lot of time alone working on her art. The isolation and difficult realities of the world at large has definitely shaped her art, Tiffany says.

“I’ve been making a lot of drawings,” she says. “I was supposed to have an exhibition of my work, and that work has been pretty dark. A lot of it expresses stress and anxiety. It’s hard to describe. Kind of surreal.”

Tiffany says she had zero expectations on what Arkansas was going to be like when she found out she’d gotten the residency.

“I didn’t know anything about Arkansas,” she says. Her only connection came when she found out about the defunct Dogpatch theme park nestled in the hills of the Ozark Mountains. Dogpatch was based around the Li’L Abner newspaper comic, which featured a group of hillbillies living in the mountain village of Dogpatch, USA. Tiffany says her school did a play based on Li’L Abner.

“That was my one connection,” she says. “That might have been my only context.”

But she didn’t find Arkansas much like the ramshackle hillbillies of the Li’l Abner comics. What she found was good people, new friends, and scenic beauty in all directions.

Tiffany says she tried to keep her expectations without stereotypes as much as possible. She grew up in Indiana hearing people make assumptions about her own state. The last thing she wanted was to do the same to another.

“I didn’t know anything about it,” she says. “I had never been. I figured it was in the Ozark Mountains, but you could say I’ve been surprised by everything. I’ve loved it here. I love being in nature.”

In a way, she says she feels grateful to have spent the majority of the outbreak in Arkansas rather than in New York.

“I’m lucky,” she says. “Really grateful to be here despite all that, and I have a safe place to isolate, that isn’t the coronavirus capital of the world, and good friends who bring me coffee.”