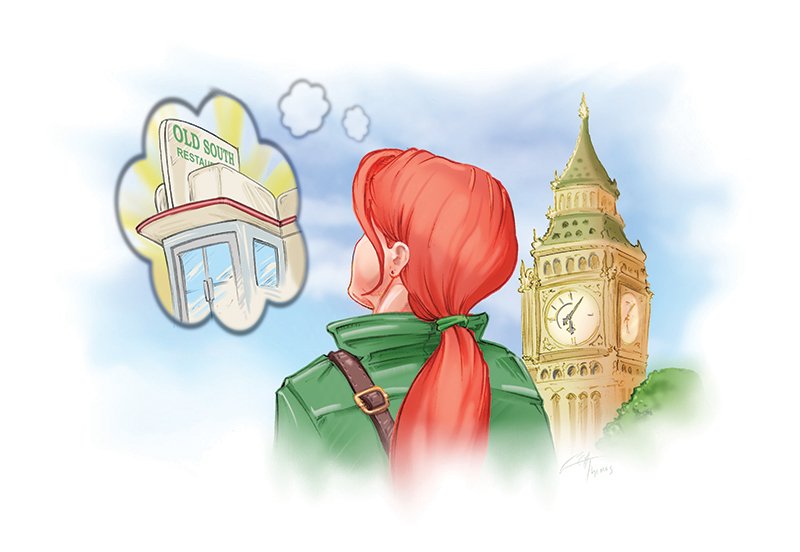 Last summer while traveling in Europe, my companion and I popped into a London cafe, ordered a couple of cappuccinos, and sat at an outdoor bistro table to enjoy our coffees and the view. My senses were whirling with the sights and sounds of a new city, and the wide variety of accents being spoken — all sorts of British accents (which I absolutely adore) and a lot of others, the origins harder to discern.

While obtaining a degree in English, I took a number of linguistics courses. Languages and dialects have always been fascinating to me, and I developed an uncanny ability to distinguish where a person is from based on their English accent, especially accents belonging to people from the United States. And I can even detect regional accents in Arkansans.

So while we were sitting at the cafe in London, I heard an American couple talking at the table behind ours. Not only was it American, it was distinctly Arkansan.

I turned around to peer at them. The pair looked to be in their 60s, appeared to be husband and wife, and the woman smiled slightly when she caught my eye. I smiled back and turned in my seat so that I could speak with them.

“Hi! I couldn’t help but overhear you talking. Are y’all from Arkansas by any chance?” I asked.

The man and woman glanced at each other and then both smiled broadly.

“Are you from Arkansas as well?” the woman asked. “I noticed the southern drawl and you said ‘y’all’.”

“I am! Actually, we both are,” I said, nodding to my companion. “Are y’all by any chance from Mcgehee, Arkansas?”

The couple looked at each other again. “Why, yes! We are? How did you guess?” the woman asked, surprised.

“I could just tell from your accent. That region has a distinct dialect. I’m from Russellville.”

“That’s where we went to college! I was a Wonder Boy!” the man said. “My name is John, and this is Judy,” he said, motioning to his wife.

“Do you still live in Russellville?” Judy asked.

“We haven’t been back to Russellville in years. Our daughters both went to Tech, just like us, but I bet we haven’t been there in 15 years. After our youngest daughter graduated, John retired and we just travel around now, mostly. We still have our house in Mcgehee, but it just seems so empty now,” Judy told me.

“Is Whatta-Burger still there?” John asked, with a concerned tone.

“Oh good! That place has the best milkshakes. That’s where I took Judy on our first anniversary,” he said, with a dreamy look.

“What about Taco Villa? That cheese dip is hands down the best ever,” Judy quipped.

“No way, Stoby’s had the best cheese dip,” John argued. “Is Stoby’s still there?”

“What about C and D drugstore? I used to love to order a sandwich and browse in the store while I was waiting. They always had the best gifts and cute knick knacks.”

“Yes, it sure is. It’s actually just a few doors down from my salon,” I said, and told them all about the progress and resurgence of our downtown district. They were very impressed by all I told them.

“What about Leonard’s? I swear you can walk into that store and you just step back in time. And Judy wouldn’t complain when I wanted to go there because she would look at their purses. Whoever thought to put purses and kitchen stuff in a hardware store is a genius!” Bob laughed. “And what about that cigar store? I think they had snakes and fish in there too, if I remember right.”

“Yes, Davis Smoke Shop and Pet Store. Still there too!” I told them.

“And that diner that you can get breakfast or lunch any time of the day?”

They asked about some more restaurants, more stores, some had closed long ago, others were still in business.

We chatted a few more minutes, exchanged email addresses in case we wanted to keep in touch, and John and Judy went on their way.

I sipped my cappuccino and smiled to myself. There are some things that will always be iconic about Russellville, the things that even people who hadn’t visited in years will always remember.

And that no matter how far from home you stray, there will always be things that will pull your heartstrings back to your favorite places.