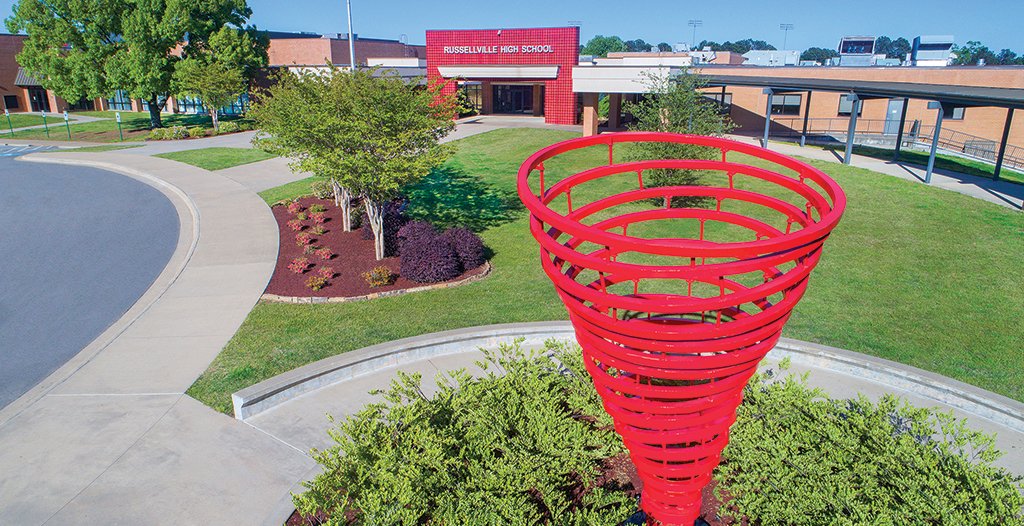 Forty-six children attended that first year of school in Russellville. One hundred years later and enrollment was at 3,300 students.​

From Russellville’s Centennial Booklet: “The schoolhouses, books, and methods have changed but the bright young faces and dedicated teachers have not been altered over the century. When we look forward into the second hundred years we must not forget to look back and see where we have been to appreciate where we are today.”

Another 50 years later, and the words are still true to Russellville School District (RSD). It’s just filled with new students in new buildings.

The Russellville School District’s mission is to educate, equip and empower every student every day to become great leaders and citizens. And the students have responded to that mission.

The RSD robotics club continues to make headlines. Cyclone athletics are always competitive. The choir reached all the way to Carnegie Hall in 2018, and the high school band, led by Dewayne Dove for 30 years, has always been considered “the pride of Russellville.”

It’s a sentiment that truly encompasses the school district as a whole. And at the heart of RSD is strong leadership. In 2020 it all begins with Superintendent Dr. Mark Gotcher.

Mark started his career in education as a music teacher at Center Valley Elementary. He’ll still occasionally pop into classes or different elementary schools with his guitar to sing duets with principals and teachers while he’s roaming the buildings.

“Any day that I can spend time with our students and teachers is a great day,” Mark says. “They are truly the heart and strength of our district.”

For Mark, his care has excelled his craft. But he hasn’t done that alone. Rachel Jones, communications coordinator, and Renae Bailey, administrative assistant, are both vital to his work behind the scenes.

“I love meeting the public, helping parents and staff,” Renae says. “I feel blessed to have this job and work with wonderful people.”

Renae says that each building she’s worked at in the school district comes with a different story, and that working with so many different people has enriched her career. Besides adding to her job skills, Renae says that during her time at RSD she’s also made best friends and second families.

Renae says she’s also been proud of how the facilities have grown and improved over the years with new playground equipment, a robotics club and additions to staff as examples. “We have a nurse at every campus now, which is a huge plus for our office staff,” she says.

Renae’s 24 years in the school district almost matches that of  Wesley White, a former high school principal and current school board member. Mr. White is a name that’s familiar to many alumni of RSD. For some, it’s the memories of him saying, “Here, kitty, kitty!” into the intercom when it was time to play the Wampus Cats from Conway.

“It made such an impact of so many Russellville alums’ memories,” Laura Wetzel, a 2005 graduate of Russellville Schools, remembers. “So many of us talk about that. To me, that was probably one of my most favorite times of the year.”>>

Wesley has refrained from saying “here kitty” out loud in school board meetings, but his legacy will always remain. His more recent work for the RSD includes writing grants for Project Lead the Way and improvements to the engineering program.

Project Lead the Way is a program that promotes a curriculum focused on science, technology, engineering and math, otherwise known as STEM. Sequoyah Elementary was the first school in the district to receive a STEM certification. It’s also been recognized as a national blue ribbon school by the Arkansas Department of Education in 2019.

“I felt like the support of the science program was something we really needed to do,” Wesley says. “Now, I feel like our STEM initiatives are one of the best in the country.”

Wesley is proud of his students and how much RSD has progressed. It’s why he’s spent eight years after his retirement to serve on the school board.

“It’s also just neat to keep up with the kids and see what they become,” Wesley says. “You’re on the front end on whether they want to be a doctor, or a lawyer, or in the mission field, then actually see that take place. It’s just neat to see those successes come through, and we’ve had a lot of successful people come through.”

Laura Wetzel believes those former students have succeeded because of RSD’s commitment to those students along with opportunities that just aren’t available in smaller districts. “ I want my kid to go to Russellville because I feel like there’s more opportunity there,” Laura says. “There’s a lot of positive exposure there.”

Laura was involved in cross country, track and student council at RSD. As a small business owner and Junior Auxiliary president, the lessons from those experiences in RSD have guided her. “It’s pushed me to work a little harder,” she says. That sense of opportunity found in the school district has also influenced the community. “Another part about Russellville that’s a positive is that if you want to be involved, you can find things to be involved in,” Laura says. “There’s enough going on here and enough need that you can volunteer and try to make a positive influence if you can.”

Troy Norton, a 1989 graduate of RSD, has a long history of volunteer work with the Boys and Girls Club. Troy now serves as the athletic director for the BGC.

His class, although made up of nearly 300 people, bonded tightly and he still enjoys getting together with his high school friends.  “Our class was very competitive but we were more of a family,” he says. “We didn’t get into trouble much.”

When Troy reminisces on those times, it’s easy for him to reflect on what he learned from RSD. “I had some really great teachers and coaches,” Troy says. “Especially with playing sports, I learned about family, and being honest, and making sure I was loyal.”

Troy remembers all the speeches his coaches used to make when he played football and basketball. He’s carried those lessons with him throughout his life. And once he knew he wanted to coach, his teachers and coaches mentored and helped him to observe classrooms and to earn in his masters’ degree.

All of this is testament to the excellence of Russellville Schools where everyone works toward the mission to educate, equip and empower.