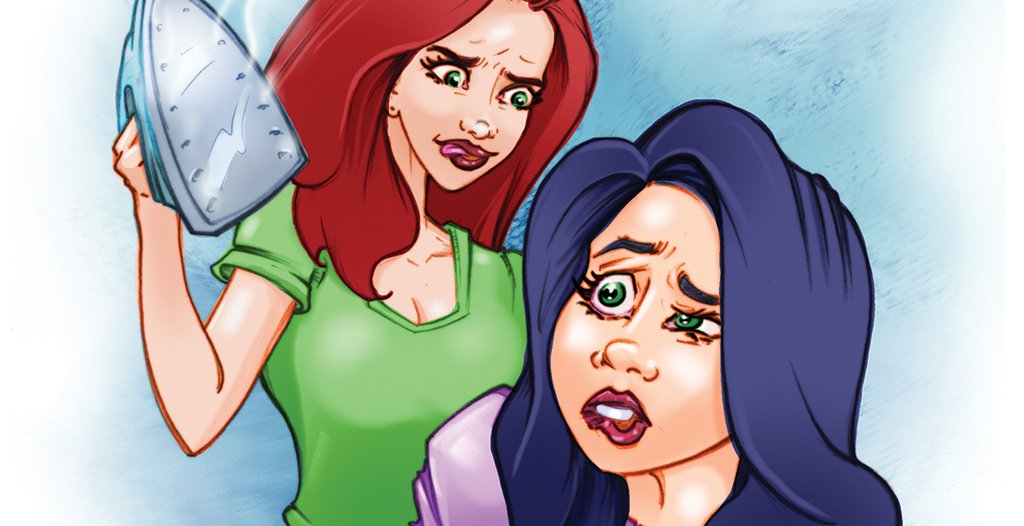 With kids back in school, or at least preoccupied with their school work and Zoom meetings, most moms that I know are getting their homes back in order after a six-month-long Spring Break.

One Sunday evening my friend Crissy called me. She asked if I was working the next day and wanted some help with organizing and cleaning. Being a hairstylist, most people assume I am off work on Mondays, but I almost never am. However, this particular Monday I was free. I told Crissy I’d swing by her house after all the kids were off to school.

The next morning, after watching Raff walk through the front doors of his school, I headed to Starbucks to caffeinate myself for the organization project I had committed to helping with. I grabbed an extra coffee for Crissy, and drove to her house.

Before I could even ring her doorbell, the front door was flung open and Crissy stood on her welcome mat with a huge smile.

“I’m so glad you’re here! I’ve already been procrastinating!” Crissy said, with her disheveled ponytail perched precariously on her head.

I handed her the coffee and stepped into her house. She had numerous piles of miscellaneous items dispersed across her living room floor, and she pointed at each one as we walked by, denoting their intended destinations. Some were being donated to Goodwill, some to her church, etc.

We started in her closet, working our way out of her bedroom, and had tackled her kids’ closets and their rooms by mid-afternoon. We had made a lot of progress!

I glanced at my watch.

“It’s 2 p.m. and I’m starving. Why don’t we go get some lunch before we have to pick up the kids from school?”

Crissy looked up from the pile of cookbooks she was sorting through. “That sounds like a great idea; looking at all these cookbooks has made me hungry. But I definitely have to put on real pants first,” she said, looking down at her slouchy pajama pants.

I looked at a pile of discarded clothing across from where she was sitting. There was a pair of striped linen pants that still had the tags attached draped across a menagerie of old sweaters.

“Why don’t you just put these on? These are super cute. And they still have tags!” I exclaimed.

“I really loved those when I bought them! But every time I put them on, I just feel like they are too… loud,” she said wistfully. “They have just been sitting in the bottom of my closet forever.”

“Oh, I think they are adorable! Put them on and let’s get lunch!”

She took the pants from me and went to change.

A few moments later, we were on our way out the door. Crissy offered to drive, and I got into the passenger side of her car. She opened the driver door and started to climb in.

“Ouch!” She yelled, jerking her leg back out of the car.

“What happened?” I asked.

“I don’t know… something is in my pants,” Crissy said, running her hand over the side of her upper thigh. “I can feel something plastic in here.”

“Maybe you left a tag on the pants? Or maybe it’s a security sensor the store forgot to remove,” I suggested, thinking of the times that had happened to me and how inconvenient it was.

Crissy walked back inside the house to inspect the mystery item in her linen pants. A few minutes later, she emerged with a worried look on her face.

“Sarah, you’re not going to believe this, but I have a sticky trap stuck to my pants and my leg,” she said.

I stared at her open mouthed. “Like, the ones for mice?” I asked.

“Yes! I forgot I had put some in my house. I saw a mouse a few times, but then my cat caught it and I never saw any more. I thought I had picked them all up! The last time I tried on these pants, I must have thrown them onto this trap!” she wailed.

“Well I’m sure we can get it off, don’t worry,” I followed her back into her house. Once inside, I had to get a better look at the trap, and this meant looking directly down my friend’s pants.

“Good thing we know each other so well,” I muttered.

Sure enough, there were two sticky traps, folded outwards so that both sides were sticky, one firmly stuck to the inside of her pants, and the other firmly stuck to her thigh.

“It’s probably not a whole lot different than pulling off a wax strip. Just try to pull it down really hard and fast,” I recommended to her.

Crissy jerked. Nothing happened. She tried a few more times to no avail.

“Let me try,” I said. I knelt down in front of her and took the sides of her linen pants in my fists.

“Lordy, this is so awkward,” she murmured.

I yanked with all my might and fell backwards as I heard a loud ripping sound. I sat up and looked at the pants in the hands.”

“Finall—-“ I stopped. And looked at Crissy’s thigh. There, still stuck to her leg, was the sticky trap. The panel that had been stuck to her pants was now covered in fabric. I held up her pants, and looked through a perfect rectangle-shaped window.

“Oh boy. Well, it’s a good thing you didn’t like those pants anyway,” I said and sheepishly looked up at Crissy.