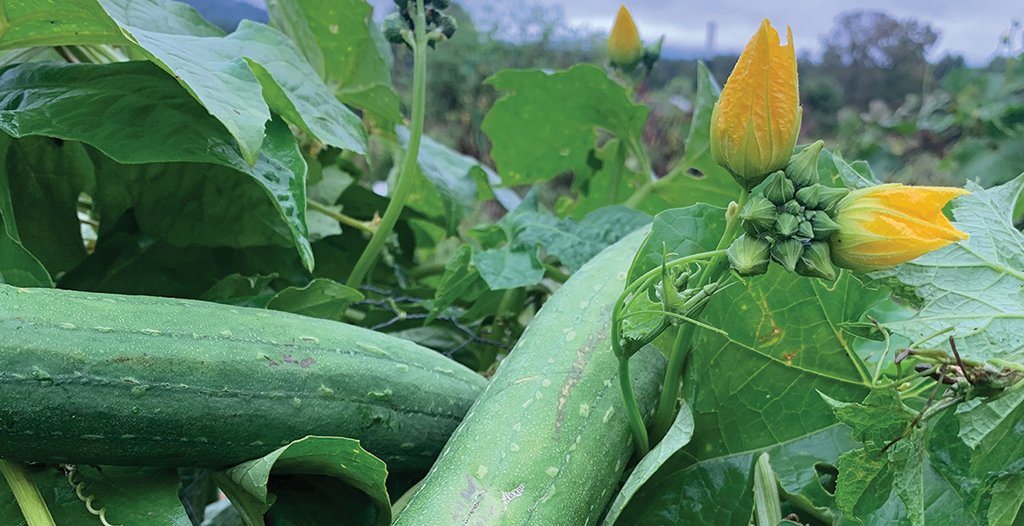 October greets us with a sea of orange and yellow. Large pumpkins appear in grocery store bins as children and parents inspect for the best potential jack-o-lantern. Decorative pumpkins nestle among hay bales around doors and front yards. Unique, colorful gourds flank these sunset-colored delights for decorative displays of fall.

Once only purchased at the grocery store or even picked at a pumpkin farm, gardeners have now begun to embrace growing their own. Whether intentional or by accident (my best pumpkin came from my compost pile after a seed from the previous year’s jack-o-lantern sprouted), growing our own gourds has become a new hobby in the gardening world.

I don’t recall many neighborhood gardens from my childhood, but the ones I do remember seemed to follow the same pattern, year after year. Tomatoes, peppers, corn, and beans filled these gardens. As much as I love growing these staples, even I probably would have grown bored of the monotony.

That’s why I delight in today’s gardeners venturing out and trying new things. No longer is the garden the square patch of tilled-up soil with the same varieties year after year. What fun is gardening if you can’t have some…fun?

While many gardeners are growing their own fall pumpkins for the first time — hoping for a homegrown jack-o-lantern or backyard pumpkin pie — I decided to try a different venture in my garden this year. It’s still a gourd, but you won’t find it with a candle in the center or filling a Thanksgiving pie. But hopefully you’ll find it in my bath, kitchen, and even wrapped in Christmas presents.

Can you guess? It’s called a luffa gourd, and this less-familiar cousin is gaining notoriety, thanks in large part to Instagram and Pinterest. Though many in the world eat it like summer squash, it’s more commonly known because of its household use in a similar manner to a sponge.

And all these years I thought all sponges came from a manufacturing plant or the ocean.

The luffa plant itself has been fascinating to watch grow. The seeds sprouted easily and the plants began to climb an arch trellis throughout the summer. An untrained eye would mistake it for a climbing squash plant. Eventually the eight plants covered the trellis and began vining beyond the area I had allotted them.

But as August arrived, I observed only lush green leaves. No flowers, no luffa. As the days began to grow shorter with still no hope of harvest, I wondered if anything would come from this garden trial.

I posted my confusion on Instagram and many previous luffa-growers assured me that flowering would begin soon. And right they were! Honeysuckle-scented flowers the color of sunshine began covering these plants in the early morning and evening, and soon the long, thin, slightly-curved gourds began to form.

Seeing that I might have dozens of luffas to harvest before a killing frost arrives, I researched uses for this unique fruit. I envision my November filled with craft projects like luffa dish sponges, luffa exfoliating soap, and luffa gift soaps for Christmas (gotta love Pinterest.)

Who knew this could all come from a few seeds I poked into the soil in April?

It’s no secret that the world saw a baby-boom of new gardeners in 2020, but I venture to believe that this generation of gardeners will look a bit different from previous generations. They’ll explore new ideas beyond the tomato. They’ll discover a whole new world of homegrown, handmade staples at their fingertips. They’ll enjoy the delight of old things made new.

Yes, old things. While you and I may see using a plant as a bathing aid as a novel idea, we’re really just harkening back to what our ancestors saw as normal.

If experimenting with the garden in fun ways is the “new normal,” I look forward to what that new normal looks like in the years to come. Gone are the mundane gardens in years past. Thanks to technology and the ability to learn “new” things, we can harness the power of our modern ways and embrace the garden of utility and delight.