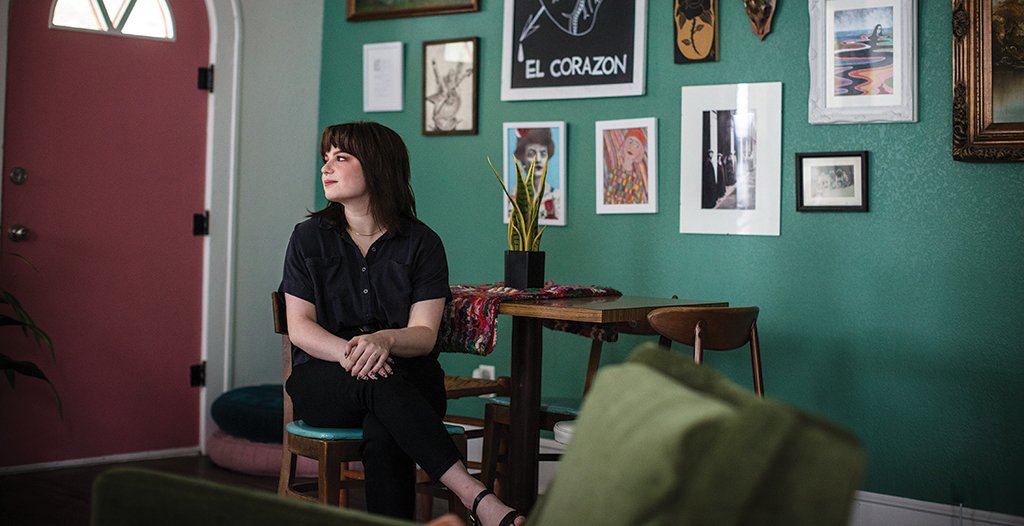 Artist Sigrid Lorfing’s unique first name comes from Old Norse. It means “victory,” “beautiful,” and “wisdom.” Her parents settled on it while her mom was pregnant. “My mom and dad were watching The Man from Snowy River,” Sigrid says. “They saw the name of actress Sigrid Thornton in the opening credits. Both of them were taken with it and began calling me that. It’s also a bit of a family name. My great grandpa Lorfing was named Siegfried.”

Now living in Russellville with her husband Jordan and two cats, Marzipan and Opie, Sigrid has had a keen interest in art since childhood. She recalls spending most of her time with hands glued to her sketchbook, constantly practicing and experimenting. “Every time Christmas came around, I would get a lot of art supplies and that was just the most exciting thing,” says Sigrid. From a young age, she knew she wanted her career to be centered around art.

At Clarksville High School, Sigrid says that she was lucky to have a class with art teacher Leslie Mori. Ms. Mori described her job as “doing what I love all day long.” Sigrid took those words to heart and knew that teaching art would fulfill her, just as it did her own teacher.

Sigrid went on to attend college at Arkansas Tech University. She saw consistent growth during her time there and soaked up everything she could from her passionate and resourceful professors. During her senior year, Sigrid presented her artwork in a student exhibition and won first place. “That told me I was going down the right path,” she says. “I knew that I wanted to do something in art for a very long time. My time at Tech really just solidified that.” Sigrid graduated from Tech in 2015 with a degree in Art Education.

Fully equipped with her fresh college experience, Sigrid started her teaching career in El Dorado, but after a year, moved closer to home and began teaching at Pottsville Middle School and Jr. High. “I loved building relationships with the kids,” she says. Each kid has a unique personality, and it excited Sigrid to watch her students grow and create art. Many students who hadn’t expressed interest in art before, blossomed in her class. “That meant a lot to me,” says Sigrid.

Due to the Covid-19 epidemic, Sigrid decided not to return to the classroom this year. Instead, she’s focused on her personal art. In the past, Sigrid’s portfolio consisted mainly of traditional paintings or drawings on wood panels. She created portraits, but most often she painted self-portraits. Sigrid was taught to draw using elements of realism, and that shines through in her work. She also draws inspiration from Gustav Klimt, known for portraits of distorted figures with an elaborate background.

More recently, Sigrid has decided to do more artwork of other people. “I’ve been having fun using other people as the inspiration here lately,” she says. She’s also switched up her medium to digital art. “I recently got an iPad, so I’ve been trying to learn digital artwork and see what I can do with it,” says Sigrid.

Digital art offers easier manipulation and more opportunity creatively. Sigrid’s favorite feature is the easy color changing. “That was something that I struggled with whenever it came to painting traditionally,” she explains. “It would take me so long to decide colors.” Now she can test several different colors with just a tap.

Sigrid’s digital art is simultaneously modern and retro. She uses bright colors and contrasts them, similar to pop art. She also uses distortion and layering to emphasize the subjects. Her backgrounds normally have colorful patterns that add a texture to the piece. “I’m hoping that I can take what I’ve done digitally and translate it into a traditional painting,” says Sigrid.

Digital art makes it especially easy for Sigrid to carry out her creative process — trial and error. “I’ll start out with a photograph,” she explains. “Then I’ll draw portions of the body that I can see, and then try to use my imagination to fill in the rest of the art work with whatever I’m kind of feeling at the time.” She throws around blocks of color, layering, and patterns to build the background around the subject. “I just kind of play around with placement until I’ve got something that I’m happy with,” says Sigrid. Each piece can take her anywhere from three to five hours to complete.

The quick turnaround time with her digital art allows Sigrid to upload more prints to her Esty page where she sells her work. She has also recently started painting custom commissioned portraits. Custom portraits can be ordered on her website, which also features her portfolio and other prints and artworks for sale.

On the days that Sigrid is feeling a little less creative, she simply takes a break. When her mind is blank, she chooses to draw inspiration from other art forms like literature, TV, and film. “My husband’s a writer, so sometimes I’ll be inspired by something he’s writing,” says Sigrid. Most often, reading is the cure to her artist’s block. Her most recent source of inspiration has been science-fiction books.

In 2016, Sigrid lost her father. This loss made it difficult to produce new artwork. She went a year with no new creations before she decided to use art as a healing tool. The pieces from Sigrid’s 2019 solo exhibition called “In & Out of Body”, explored her reactions to grief and the unexpected loss of her father. This collection reflects the disorientation of a sudden loss with its segmented pieces and isolated subjects. These paintings have a dark surrealism that makes them visually and emotionally captivating. The collection was hosted in the Batesville Area Arts Council Gallery from August to September of 2019.

Sigrid is excited to continue her personal work in the future. She plans on experimenting with her art and expanding her portfolio as much as she can. After this personal time, Sigrid would like to pursue a master’s degree in studio art.