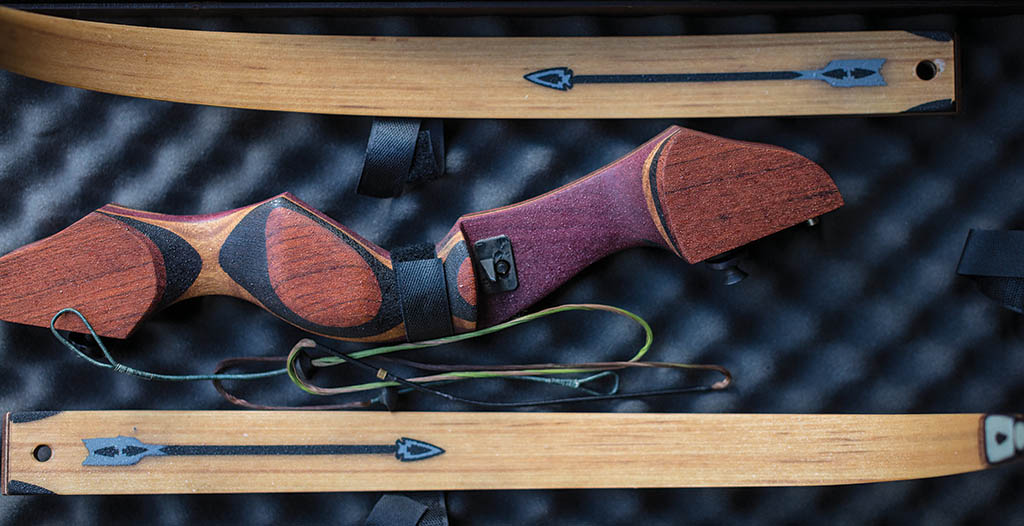 If Rick Snell can’t harvest it with a traditional recurve bow, then it wasn’t meant to be harvested.

At least that’s what he’ll tell you.

“It’s been a lifelong passion of mine,” Snell says. “My dad was a hunter all my life. It was a part of my family, so I started hunting at an early age. I started shooting a bow when I was five or six years old.”

There’s gratification in harvesting a big game animal but more if you can harvest it with a weapon of your own design. Snell has been shooting a recurve bow most of his life, but not too long ago he began making them himself.

Building a bow is a laborious and tedious process, but it’s one Snell takes pride in. He described the process from start to finish. “The first thing you do is you want to pick out the wood,” he says. “Whoever is wanting the bow, they’ll pick out the wood they want, whether they want a dark lacquer color or they want brown. I put in different African and South American hardwoods. You glue up the block, which is four inches wide and two inches thick and 19 inches long, and that’s what becomes the handle.”

Then it’s on to choosing material for the limbs. The limbs of a bow are where the weapon gets its power. They’re made from wood and glass, the colors, variety and strength of which help determine not only the poundage but also the visual appeal of the bow.

“The poundage of the bow is figured out by the thickness of the glass in the bow and the thickness of the lamination you’re using for your core,” Snell says. “Most people wanting to hunt are shooting between 55 and 65 pounds, anywhere in that range. I used to shoot 70 or 75, but as I got some age on me, I realized I don’t need all that weight. I keep it around the 60-pound range. It’s totally different than a compound bow, which relies on cables and pulleys to do what a curve in a recurve limbs do.”

Snell then makes the parts to glue up the limbs, puts them in a press and in an oven. “I cover them in a heat-treating epoxy, and that’s the messiest part,” Snell says, “gluing up the riser and gluing up the limbs.” After that is done, you have to clean off the excess glue, shape the handle and get the handle all worked and everything is in the rough, and that’s where the process starts.”

The Silent Stalkers are three-piece bows with the limbs bolted on and removable for easy storage. Special care is taken to taper down the limbs, fit the string and make sure everything lines up straight.

“From there I can start cutting the limb tips,” Snell says. “That’s a very tedious process because it’s done by hand with a hand file.”

A recurve bow gets its name because the limbs have two curves in them. Snell’s bows actually have three. “The model I build now has a curved limb pocket. Where the limb fits into the bow, I put a curve in it,” he says. “My bows ultimately have instead of two curves like most recurves, three. My design makes the limb work farther out toward the tip, which hypothetically makes the bow fire faster.”

Snell says he loves the aesthetics of the bow, the curves of the limbs and the exotic woods. “The beauty always fascinated me,” he says. “I used to really love high-end shotguns for the same reason, but I’ve always been in the recurve market because they are always built with exotic woods.”

The other reason he loves the bow — he views the weapon as an extension of himself. When someone says they are a bowhunter these days, most of the time they mean they shoot a compound bow.

“To me, that’s become too mechanized,” he says. “I rely on instinct.”

Snell, like all instinctive shooters, doesn’t use sights to hit his mark. Some call instinctive shooting “aiming by not aiming.” The best way to think of it might be like throwing a baseball to a friend. You don’t aim. You just throw it. An instinctive shooter has fired an arrow so many times that they can hit a target by feel, their “instincts” effectively doing the aiming for them.

“What I love about it is that you are using the ability God gave you innately,” Snell says, “and if you practice enough, you can do it too. I can have someone hitting the target on their first day of practicing with a bow and arrow. Shooting traditional equipment is hand-eye coordination. Pull the bow up, draw, shoot. You’re aiming for a target as big as a paper plate.”

Snell says he also likes the finesse of a recurve and prefers it over other traditional bows, like the longbow. “Stalking is doable with a longbow, but a recurve is shorter and easier to carry,” he says. “Plus, you have that beautiful curve to the limbs.”

Snell moved to Pope County in 2006, mostly on a whim. Before that he lived in Alaska and Illinois. But after visiting friends in Arkansas, he and his future wife knew they had to move here. “I came down here at Christmas in 2005,” he says. “My wife was riding a horse across a piece of property. The next thing I know, I’m buying that property and building a home. We love it here. Of course, it doesn’t have the mountains of Alaska, but this state is magnificent. Thirty years ago, I’d have laughed if you told me I would live in Arkansas, but it’s been one of the best decisions in my life. It’s an absolutely beautiful state.”

Snell loves the outdoors and Ozark Mountains and the beauty of it all, but more than that, Snell says he loves the people. “The people I go to church with are like family to me,” he says. “Where I live surrounded by the south end of the Ozark Mountains, it’s as rough and rugged as it was in Alaska. I have all the fishing and hunting and wildlife I could want, and my wife rides her horses five or seven days per week. She knows these mountains better than I do.”

With his own bow in hand, Snell has harvested every big game animal in Alaska, where he used to live. It’s a feat known as “The Alaskan Grand Slam.”

Snell’s main passion is hunting grizzly bears. Stalking them and killing them with a bow is just about as exhilarating a thrill as you can find, Snell says. “It takes a lot of nerves, and it takes a lot of patience,” he says. “Especially if you are hunting them on the ground.”

At one time, Snell had one of the largest bears taken with a recurve bow. Records for bear aren’t kept by the size of the animal, but by the size of the animal’s skull. His biggest measured 25 and 2/16 — that’s 16 inches front to back and 9 1/2 inches wide. “It put him in the top five in the world in 1997,” Snell says. “It’s tied for 10th now. It used to be the Alaska state record, but there’s been bigger taken.”

But one bear has alluded him all these years — the Kodiak brown bear. Kodiaks inhabit the islands of the Kodiak Archipelago in southwest Alaska. They are the largest recognized subspecies of brown bear and one of the two largest bear species alive today, the other being the polar bear.

To get a permit to hunt one — its luck of the draw. Snell said he stopped putting in for a permit some time ago. “I had a stroke,” he says. “It knocked the wind out of my sails.”

Still, Snell says he’d like to hunt one if he ever had the chance. “I’d like to go after that one, but that’d be the first time I’d have a gun behind me.”