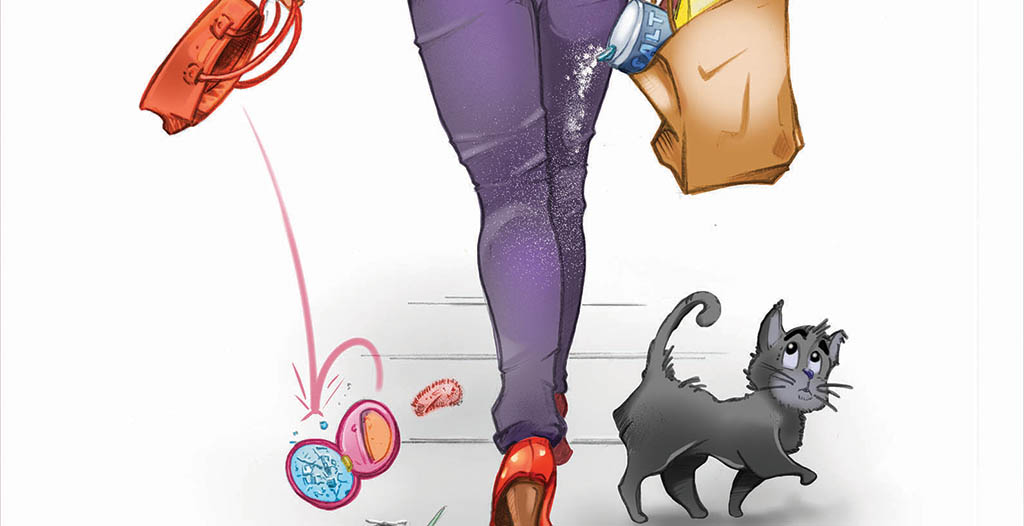 For as far back as I can remember, I’ve been accident prone and the universe always finds a way to throw the wildest situations and awkward moments my way. I document them for my own memories but also to entertain my family and friends.

Several years ago, when I started writing this column, I figured I would have material for at least a decade. However, so many stories can be hard to describe in the form of a short story, or maybe not appropriate to tell, or maybe just won’t seem funny to anyone that wasn’t privy to the situation.

So one morning, I went to my mom’s house for our routine cup of coffee and chat after dropping my son off at school. I told her I needed some inspiration for my latest article.

“Hmm…” she tapped her chin, thinking.

“My favorite was that day your pants got stuck in the teeth of the escalator and it ripped your pants off in the mall.” She said, trying to keep a straight face.

“I’m so glad that’s your favorite. Thinking about that still keeps me up at night.” I said, with an eye roll. But I told her that I had already written about it.

“What about the one where your dress got stuck in your underwear when you were a bridesmaid in that wedding?”

I nodded that I was pretty sure I had written about that, too.

“What about that time Raff asked for a big ____ like his dad’s for Christmas when you were at church, in front of everyone?”

“I can’t tell that one Mom, it’s inappropriate. Plus he was maybe 4 at the time and was completely innocent, but if he knows it got published when he is 11, I’m afraid he will seek emancipation from me. That could be traumatic for him.” I said, as even I felt the surge of embarrassment it caused when he had said that and remembered wishing I should melt into the pews at the back of the church.

“The time Raff drank that piña colada you made for yourself because he thought you made him a slushy?” she suggested.

“I can’t tell that! Everyone will think I’m an irresponsible mother!” I said, defensively.

“The one where you fell off the treadmill in the gym and got your hair stuck in it?” I nodded. Already told it.

“The one where you went on that date and ended up stringing a WHOLE roll of toilet paper behind you through the restaurant because it was stuck to your shoe?” my Mom asked.

“I’m not sure that it’s funny enough. It’s really only funny if you’d seen it.”

“The one where you were in the spelling bee in ninth grade and they asked you to spell ‘angina’ and you spelled ‘vagina?’” I shuddered. That memory kept me up at night for years during high school.

“I’m not sure that’s appropriate. I don’t know if I can put out a column with that word”

“What about the one where you were meeting that one guy’s mom for the first time and she was a clean freak and you accidentally stepped in dog poop and tracked it all through her house on her white carpets?”

“What guy?” I asked, trying to recall.

“The guy that had that weird mole on his face that looked like food and you kept forgetting, and you’d tell him he had food on his face, and he kept having to remind you it was a mole.”

“Oh yeah! THAT guy!” I shuddered at the thought of that unfortunate looking mole.

“What about the time you forgot to set your parking brake and your car rolled down the hill and hit that fire hydrant and it sprayed all over that kid’s birthday party he was having in the yard?”

“Oh yeah… I thought I had suppressed that one..” I said, embarrassed all over again.

“Or the one where you forgot to set your parking brake again and your car rolled into that guy’s pond and we thought your car had been stolen for like 3 weeks?” she asked.

“Oh yeah… I forgot about that too. Good thing that took care of that car. It was always getting me into trouble.”

“Or the one time that lady was paying you to house sit and you accidentally got the fish food and those potpourri flakes mixed up and you killed all of her koi fish?”

“Oh that was awful. I forgot about that. But I bought her new ones!”

“Sarah! You put orange and white glitter paint on some catfish you caught!”

“And she was so surprised they were so much bigger when she came home! She moved like a month later anyway. I did feel really bad about that though. Good thing she had really poor eyesight.”

“Or when you ate that ‘chocolate’ at that wedding but it was actually chocolate flavored Ex Lax?” She asked, stifling a laugh.

“Mom! That really old lady, I think she was the bride’s great grandma, she offered me a piece of chocolate! I hated to be rude and say no! How was I supposed to know she got it out of someone else’s purse and that it was a laxative?” I asked. Everyone had forgot to mention to me that Grandma Zella was senile.

My mom was laughing so hard she could hardly catch her breath.

I rolled my eyes in frustration.

“I should have known that asking you for humorous story ideas would lead me down a rabbit hole,” I said with a smirk.

“Or what about that time you did your first haircut on a guy after beauty school and you thought he had said to use #2 guard and he actually said he just wanted a trim?” she said, barely getting out the words through her fit of laughter.

“Yeah that was pretty terrible. But funny in retrospect. You’ve definitely given me some good ideas and also reminded me of a few memories that I may have to seek therapy for in order to suppress again,” I said with sarcasm.

But my mom had definitely given me lots of good story ideas, and lots of material to pass by my editor to see which one he thinks I should start with first. Or better yet, which ones he thinks our readers would like to hear about first. l