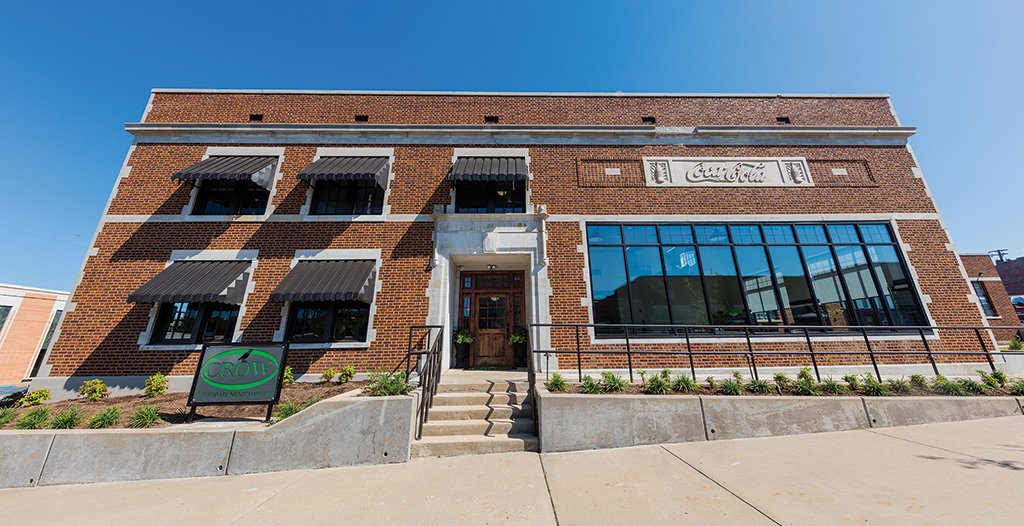 This is ABOUT’s first installment of quarterly features to the tell the stories of a few iconic downtown buildings found in the River Valley — what they once were, what they are today, and how they’ve influenced their communities. We invite you to read the history that led to the present and think on your own memories of downtown’s yesterdays. But we also hope that these pages can help you to envision downtown’s tomorrow.

She’s been called beautiful, sexy, and classy. She has her own YouTube video and websites detailing her history. All of that is pretty impressive for a 91-year-old. But then, she has had a recent facelift in the form of a historic renovation and modernization by the current owners, The Crow Group, Inc. Since 1929 she has been an essential part of the growth and vitality of downtown Morrilton.

Designed by the Arkansas architectural firm Thompson, Sanders, and Ginocchio, the Coca-Cola Building located at 211 North Moose Street in Morrilton features unusually fine classical detail in a streamlined commercial building in the Colonial Revival style. The structure itself is a rectangular two-story divided horizontally with stone-string courses. It’s unique Art Deco sign cut in stone with Coca-Cola written in script is flanked by two images of Coca-Cola bottles against stylized foliage.

The Coca-Cola Building was the fifth Coca-Cola bottling plant in Arkansas and brought a boost to the economy in the form of jobs for Morrilton and the surrounding area. The grand opening on August 7, 1929, was attended by 10,000 people. Visitors danced to an orchestra from Memphis, toured the building, and were treated to unlimited Coca-Cola. The opening was featured in a 52-page article in the local newspaper, The Arkansas Unit, that included pictures of the machines and detailed descriptions of the processes used in the plant. It also contained greetings and well wishes to Coca-Cola and advertisements from local companies that had provided services or materials for the building. The entire town of Morrilton celebrated with pride. This was an incredible event for a few reasons. Most notably, the population of Morrilton at the time was just around 4,000 and the current local newspaper only averaged 10 pages per issue.

The Coca-Cola bottling plant was active in the downtown area for more than 70 years before moving to a larger facility in Morrilton in the mid-1960s. At this time, Wal-Mart Store No. 8 moved in to the building.

Wal-Mart-Store No.8 was Sam Walton’s first research and development venture for new products and Morrilton’s first Wal-Mart store. It opened on October 24, 1967, and was met with much enthusiasm from the town. The local paper at this time was the Petit Jean Country Headlight, and it featured Walmart’s two-page grand opening advertisement of discounted products — everything from automotive and sporting goods to deodorant. The exterior of the building had banners that read, “We Sell for Less,” “Quality Merchandise,” and “Wal-Mart Discount City.”

The store opened with a no-frills atmosphere. “I recall when Walmart came to town,” Larry Miller, a retired newspaperman says.” Store No. 8 was new and a lot of people didn’t know if it would succeed. They set up the building like a warehouse. They didn’t do much to improve on it, just tables with merchandise to keep the prices low.”

In the 2015 Preserve Our Past Essay contest, Atkins Middle Schooler Reese Bixler recalled that when Wal-Mart came to town “from clanging Coke bottles to crashing shopping carts, it was a huge change.”

With the success of the store, Wal-Mart moved to a larger facility in Morrilton in the mid-1970s, and the building was bought by the City of Morrilton.

Some renovations were made before Morrilton City Hall and Police Department were moved into the Coca-Cola Building. Crews built offices to accommodate the staff, constructed 13 jail cells, and removed the elevator to the second floor. They also cut a hole to connect the parking garage to the office area. When crews started cutting through the wall, they discovered that those walls were one-foot thick concrete. “It took a week with a hammer-drill the cut through the wall,” says former Morrilton Mayor Stuart Nelson. “The building will never fall. It could be used as a shelter.”

An old fire truck was stored at the end of the building so it could be designated as a fire station. And an Art Deco feature that remained in the bottling room was a reminder of the building’s history. “Up by the ceiling all the way around were little coke bottles,” says Nelson.

The building was then purchased by the Crow Group, Inc. in 2018. Owned by Mike Miller, the Crow Group is a full-service construction and engineering firm with expertise in historical renovation projects. The Crow Group worked with the National Park Services Historic Preservation Department and the Arkansas Historic Preservation Program to preserve the historic architecture while modernizing the facility to become their corporate headquarters. These newest renovations came with a price tag of $2.2 million. Crow consulted with HTW Architects and Engineers in Russellville on the conceptual design then worked with many local contractors to complete the renovation.

“When we bought the building, Morrilton was on the cusp of revitalization,” said Brain Rohlman, Crow Group president. “We could have purchased a new building or built one; we’re one of the largest employers in the area and had a self-use for the building. But we wanted to be a catalyst for others to renovate.”

Rohlman’s statement proved true when two developers purchased other properties in downtown Morrilton to renovate into useful spaces. A local economic development group also worked with Main Street Morrilton to purchase and revitalize a vacant lot into a multi-use outdoor space for the community.

Crow’s extensive restoration started with demolition to remove jail cells and interior additions by former occupants. This revealed the original Coca-Cola bottling room complete with crown molding featuring medallions and life-sized coke bottles that were repaired and restored. Renovation crews replicated the original tile surround, large exterior windows, and were able to restore the original tile in the entryway. Solar panels were added to the roof to offset utility costs for the large space.

Office spaces, a conference room, a break room, restrooms, a kitchen, and a workout room were added. A wall opening between the original building and the annex was widened and fitted with a fire exit door.

These are only some of the changes and restorative steps made, and every change was pre-approved by the National Park Service Historic Preservation Department.

The completed restoration brought the iconic building’s exterior close to its original look from 1929. An additional landscaped area was added that brings even more curb appeal. The interior is a combination of industrial-modern design with original features restored to match the original architectural design.

The Crow Group celebrated its new corporate headquarters with a grand opening on September 27, 2019 with a crowd of around 200 visitors included employees, clients, vendors, and members of the community. A ribbon-cutting ceremony and evening event was co-hosted by the Morrilton Area Chamber of Commerce with a guided tour of the facility following.

Since that grand opening, the Crow Group, Inc. was recognized for its corporate headquarters at the Morrilton Chamber of Commerce Banquet as the Business Site of the year, and owner Mike Miller was named the 2019 Earl Love Business Leader of the year. In 2020 the Crow Group received the Excellence in Construction award by Associated Builders and Contractors of Arkansas and the Downtown Revitalization Excellence Award presented by Main Street Arkansas.

The Coca-Cola building has served the community of Morrilton with economic opportunities and a wealth of community services from its occupants. Its historical significance can be linked to two of the largest companies’ first stores and its unique architecture is timeless. With its restoration, the Crow Group has enabled this building to continue its fascinating legacy. The Coca Cola Building was listed on the National Register of Historic Places in 1982 and as one of 60 commercial historic buildings on the tour of Morrilton.