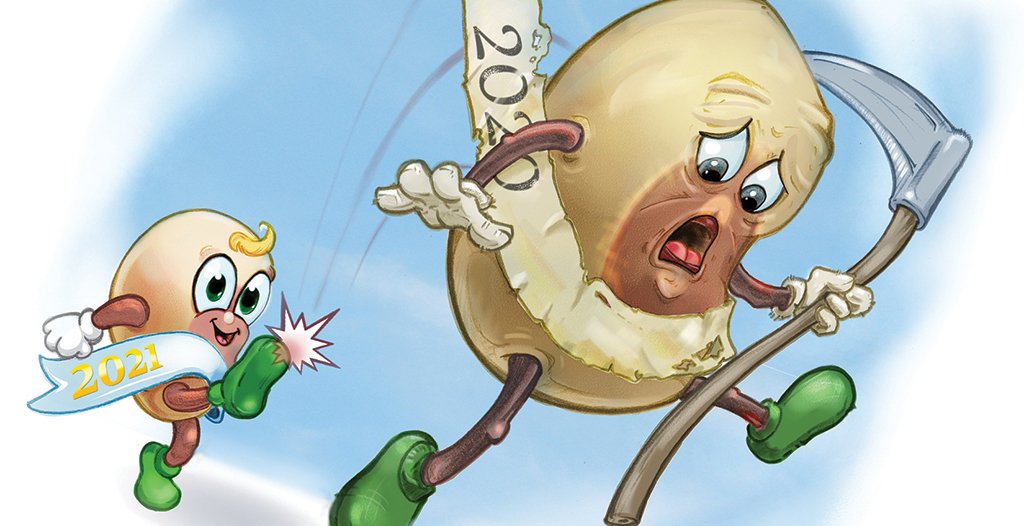 As we begin another new year and mark the end of 2020 (can I get an Amen?), I started thinking about all the traditions, superstitious foods and ceremonial practices that are thought to bring us good luck in the coming 12 months. My mother has always been fastidious in her New Year’s Day traditions, and with the year we just finished, I think we need all the luck we can get.

Growing up in the Deep South, black-eyed peas, hog jaw (jaw… jowl… who knows what part of the pig it was), and cornbread were an absolute must.
We would gather around my mother’s dining room table with our loved ones present. My mother insisted this would guarantee we stayed close with our family all year and would insure our good health. Other family members would bring all sorts of sides, most incorporating black-eyed peas in some way — salads, relishes, jams (bacon jam with black eyed peas is actually quite delicious) and even sometimes partially dehydrated peas coated with seasoning, my personal favorite.

Later in the day, we would finish off our cornbread by drowning it down in a glass of buttermilk. My mother would tell us that it all had to be eaten by sundown and held on to the belief that cornbread signified sustenance and abundance.

I disliked black-eyed peas when I was younger, but my mother always insisted that my sister and I would not have good luck in the new year if we did not eat our peas. She usually only made us eat 12 little peas, signifying good luck for all 12 months. But eating 12 of anything you dislike can seem like torture.

Black-eyed peas still aren’t my favorite vegetable, but I don’t dislike them like I used to. However, I’ve always been very curious as to how these humble legumes, and other somewhat unsavory foods, became such a symbolic presence on our dining tables come January first.

According to the Talmud, or Jewish religious scriptures, the practice of eating black-eyed peas on holidays for good luck dates all the way back to 500 A.D. The Jewish people brought this tradition with them to the United States when they settled in Georgia in the 1730s. The tradition of eating cornbread and salted hog jowl on New Year’s Day stems from the Civil War. Union soldiers would raid Confederate camps and take all of their rations except for the cornbread, jowl, and other pork scraps, mistaking these items for animal slop. The Confederate soldiers considered themselves lucky to be left the two things that would not perish quickly. Therefore, they became a symbol of good luck all across the South.

Once I started reading about our own Southern New Year’s traditions, I wanted to know what the rest of the world did, especially this year. So I reached out to my friends in other regions of the US and abroad via Facebook, inviting them to share their good luck traditions with me. Some of these traditions sounded delicious, some… well, let’s just say I’ll be much happier to eat my black-eyed peas!

“The only food related traditions on New Year’s Eve where I’m from relate to bringing a slice of bread and a lump of coal into the house just after midnight on NYE. While everyone else was holding hands and singing Old Lang Syne, I’d be bustled out of the door into the freezing night with a piece of coal and a slice of bread. Then I’d have to knock on the door and wait to be let back in, carrying the coal and bread. The idea was to invite food and warmth into your home so that you’d never be cold or hungry. Then we’d have a ‘fry up.’ This would be all of the leftover vegetables that weren’t eaten on Christmas thrown into a frying pan, mashed up together to form a kind of green substance similar to mashed potatoes, then served with leftover cold turkey. There’s also to be pickled onions served with it.” – Paul Voodini, Yorkshire, England

“We always ate New Year’s Day dinner at my grandmother’s house. She fed us hog jowl and celery with a pineapple cream cheese concoction. I would rather have had bad luck for the rest of my life than eat either thing and, I’m ashamed to say, I stuffed the jowl and the celery between the cushions of her (thankfully vinyl) couch. The shame haunts me to this day.” – Shannon F., Arkansas

“We have a custom to give thanks to our ancestors, to our immediate family, and our family and friends that have passed on. We toast each group, then each other with mulled apple cider, mulled wine, and mulled mead.” – Lothar Malmberg, Rosebud, Alberta, Canada

“My parents would make us eat cooked codfish (codfish that is preserved in salt) with boiled cabbage and potatoes, and then served with good homemade olive oil from our olive trees. That kind of codfish was very expensive at the time, so it was considered a luxury to my parents. I liked it all except the cabbage. Then at midnight we had a second meal, with fried garlic shrimp, migas de miolos (a sort of smashed bread with pig’s brains) to migas de sarrapatel (kind of like a spongey white bread) polvo à lagareiro com batata à murro (literally translated ‘octopus made by a guy that grows olives and punches potatoes’) hare stew, tons of homemade pastries like filhoses belhoses, and sweet rice with milk. So basically Diabetes and cholesterol is what we have!” – Francisco Dias, Alentejo, Portugal

“My mother is Jewish, and growing up we would go outside at midnight on New Year’s Eve and bang on pots and pans with wooden spoons to ward off any evil that may try to follow you into the new year.” – Mary Mousch, Meriden Connecticut

“New year’s Eve is my parent’s anniversary, so we usually have a charcuterie board (what my mom has always called a “ham and cheese plate”) French bread, fancy crackers, cream cheese, a port wine, cheese ball, pickles, olives, smoked meats, and of course lots of Jewish wine and eggnog by the fire, and Champagne at midnight.” – Tommy Ketcheside Hinton, London, AR

“My mom and I would go to my Aunt Doris’ party every year, and she would make bierocks (like a beef and cabbage turn over) from scratch, always placing a coin in each one before they went into the oven to bake. From what I remember, these were traditionally eaten by poor people, so when my great grandparents immigrated here and made a better life for themselves, my great grandma still made them to remind the family what they had overcome, but put the coin there to symbolize the good fortune they had when they got here.” – Krystal Younglove, York Pennsylvania

“My mom is not Southern, she’s from Michigan, so even though I was born here, we always had very different traditions. My mom always made pork ribs and sauerkraut, and said Northerners ate pork and cabbage on New Year’s Day for good luck and good fortune.” – Rachel Warner, Russellville AR

“Mama always said don’t sweep on New Year’s Day or you will sweep out your luck for the new year!” – Jean Cook, Atkins AR

“I love New Year’s celebrations in general and my children and I had special dinners celebrating Rosh Hashanah. Salmon cakes for wisdom, carrot coins and bitter greens for wealth, and apples dipped in honey for sweetness. We also enjoyed the Vietnamese New Years celebrations at our church with new fruit and sweet sticky rice. And, on February 2nd, Candlemas. On this day, you make a pancake, hold a gold coin in your right hand, and flip the pancake in the pan. If you’re successful, good luck in the coming year.” – Shannon Farhat, NWA

“In Spain, we eat exactly 12 grapes at the stroke of midnight. Back in the 1800s, my family had vineyards and came up with this tradition as a means of selling more grapes toward the end of the year. Today, Spaniards all over the country eat one grape for each of the first 12 bell strikes after midnight for a year of good fortune and prosperity.” – Maria Casaragi, Alicante, Spain

“In Scotland, we have Hogmanay. On this day, we celebrate the first footing. Traditionally, the first person who crosses through the threshold of your house after midnight on New Year’s Day should be a dark-haired male if you want to have good luck in the coming year. The man should bring gifts of coal, salt, shortbread, and whiskey, all of which further contribute to the idea of having good fortune.” – Laura Thompson, Moray, Scotland

My family has all sorts of traditions, many probably stemming from old wives’ tales. But as I get older, I find them oddly comforting and strive to carry them on. But after learning about all of these other New Year’s Day traditions, it makes me want to try all of them! Not entirely sure how I feel about the stuffed pigs feet, though, to be honest. We can’t ever have too much good fortune in a new year, and considering how 2020 was for most of us, I think we can all agree we need all the help we can get in 2021!