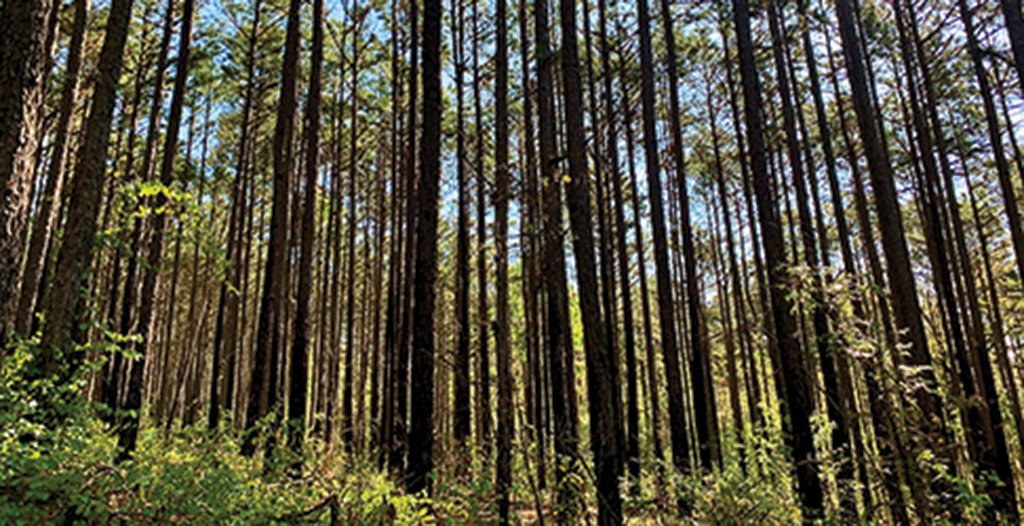 It’s fairly common to see logging trucks on our road. They’re mostly loaded with pine and headed for the sawmill. I can hear the large engines heading up the hill, their massive tires spinning on the gravel. Sometimes I watch them drive up Slo Fork road, that red scrap of fabric attached to one of the longest logs and dancing in the dust.

Logging is central to my family’s history. My father and grandfather logged all around here and up through Rosetta in the Ozark mountains. They worked mule teams, and my grandfather was known across the region for his skills. This was all long before I was born.

I do remember my Uncle Junior, though. He logged areas of Yell County and cut pulpwood for a living. My childhood was filled with fascinating relatives with beautiful Ozark accents, long and winding tales, and quick-witted humor. But Uncle Junior was a legend among legends. He drew all his water from a sulphur well. He flicked his hand rolled Prince Albert cigarettes into the potbelly stove when he finished them. He still had an outhouse. He had a pony named Princess in the pasture. As a child, I came across to most folks as a shy, well-groomed town type. But truth be told, way down deep in my heart, I was a lot like Uncle Junior… or at least I sure wanted to be. He kept it simple. He wasn’t here to impress you.

Lately I have been thinking a lot about planting trees. We’ve been doing some research on useful native plants to grow on our place as well as trying to learn more about the ones that already grow here, mostly pine, Osage-orange (bois d’arc) and juniper. Pawpaw trees are natives and bear fruit. We’ve tried our hand at those before and they died. But we’re going to try again. We have a beautiful decades old Oak in our yard, and we’d love to explore adding more of those. We’ve talked about chinquapin oak, some hickory trees, buckeye, sycamore, black cherry, and walnut. I’d also like to add a slew of redbuds so we can make jelly with the blossoms. And I want to add to the dogwood that already grows on our property, one I planted last year in honor of my dog Elsie, my best friend for 17 years.

Tree planting is often used as a generic symbol for some kind of new and prosperous beginning. That’s fine and all, but tree selection is a careful affair. After all, a garden lasts a season and then dies back. Each year you can choose to make adjustments and changes to the garden. But a tree? Once it’s in the ground it’s there until long after you’re dead unless you cut it. And those roots are going to go way beyond the base of that tree — maybe even into your plumbing. In other words, sure, planting a tree is a nice new beginning. But mostly it’s an exercise in choosing wisely.

So what does any of this have to do with my Uncle Junior and his logging days? I think there is a misconception in our culture that seemingly opposite things are just, well, opposites. Perhaps the closest convention is that well-worn saying “opposites attract.” But planting trees and cutting down trees are only opposites if your thinking is short-sighted. All trees fall eventually — death, birth, death, and on, and on. Call it a circle or a gift economy or just plain common sense.

The huge oak that grows in my front yard got there because a squirrel planted it, probably. Pure serendipity. Same goes for most of the juniper that lines every roadway. Humans decide to plant trees all the time, and that is certainly very important. But they grow fine without us. And, truth be told, I think we sometimes pat ourselves on the back too much when planting them, likening the act to a gift we’ve given the world. Really, though, we’re just paying back what we already used and what we already owe, or maybe we’re paying it forward. In many ways, if we’re thinking long haul, it’s the same difference.

Uncle Junior spent a lot of time cutting trees down. I will likely cut my own share. But it’s also a part of my life’s work to plant some. My Uncle Junior and I aren’t opposites, at least not if you refuse to think in a short-sighted way. So, sure, planting trees is useful. But the real gift we can offer to the generations that come is our long-term thinking. Plant trees for shade or growth. Know that their roots grow much deeper than you think they will. And, as you plant, know that every decision we make right now will stick around, in some form or another, for decades… or even longer. l