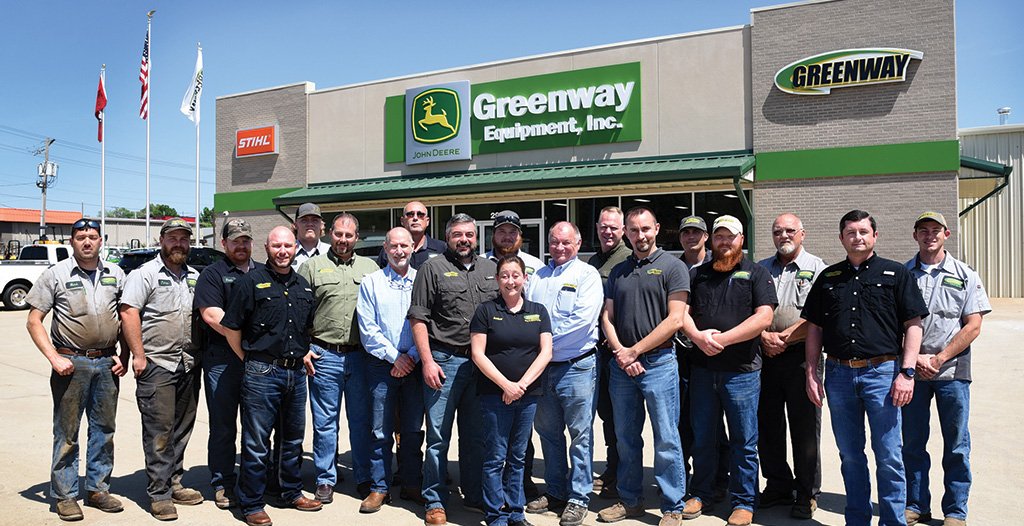 With the mission statement: “To earn the trust and respect of customers and employees alike,” Greenway is off to a good start at fulfilling that goal at its most recently acquired dealership in Russellville.

From one acre to seven, Russellville Greenway has been busy moving and expanding. Now located at 2911 South Arkansas Avenue, just up the road from its former location, Greenway’s new location is open from 8a.m. to 6p.m. Monday through Saturday.

According to President Bill Midkiff, Greenway’s owners recognized that the former location wasn’t large enough for the needs of their growing customer base. After acquiring the current location in the summer of 2020, they have spent the months since renovating and expanding to include six bays with an overhead crane to accommodate combines and other large equipment for repair. The new facility also has better visibility and a safer traffic flow with a traffic signal being installed in front to aid accessibility for large equipment. “Safety is our number-one priority, so the necessary traffic light was not a difficult decision.”

Touting 30,000 square feet of building including service bays, parts storage, a showroom and offices, Greenway is proud to announce that what hasn’t changed is the employees. Greenway purchased Maus Implement in late 2019 and all 23 employees remained with the company, including Location Manager Ryan Maloch. Greenway is looking to increase Russellville location employees to 30, Midkiff says. “We are always looking to hire good people.”

While Greenway is known for carrying all things John Deere, they also carry Stihl, Frontier and Honda, as well as parts. “We pride ourselves in providing the customers with a good experience at a sustainable business,” Midkiff added. “We work when you work, with everything from lawn mower blades to combines, and both new and used equipment.”

The Russellville Greenway location carries equipment for more than just farmers. With lawn tractors, line trimmers, pressure washers and more for homeowners; and excavators, track loaders and more for contractors, Greenway has something for everyone from lawn and garden and compact construction to farmers and ranchers.

Greenway has been a family CC owned and operated company since its founding in 1988, in Newport, Arkansas. With 31 operating locations including five in Southeast Missouri, Greenway services 65 counties with more than 700 employees. The newest location is scheduled to open this Fall in Sherwood.

“We’d like to thank the people of Russellville for their support. We want to continue to support them as well,” Midkiff said. Greenway’s Russellville grand opening was celebrated on April 22. They can also be reached by calling 479-968-2220. 