An array of blades: The basics of cutting tools 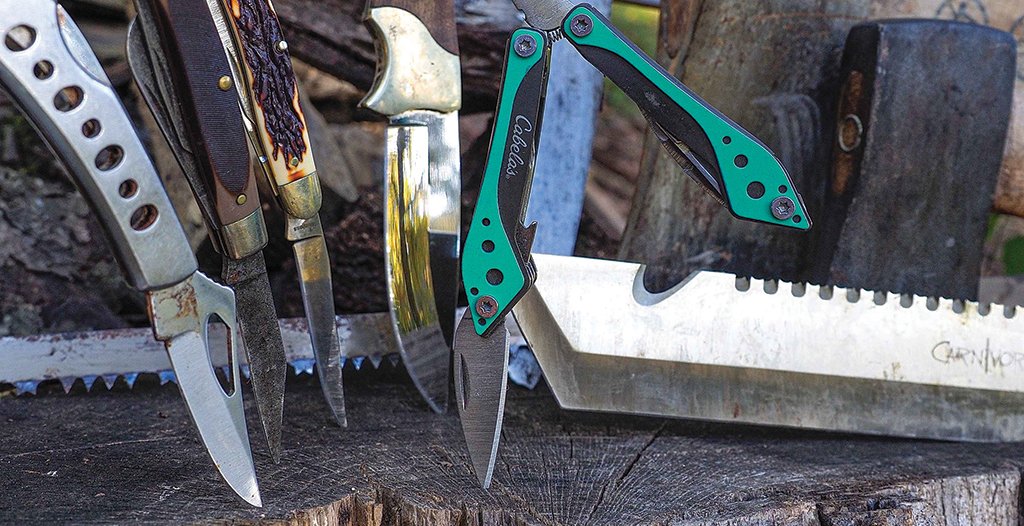 With the truck unloaded after a weekend camping trip, I decided to pilfer through storage spaces in the Tacoma and maybe pare down my daily supplies.

Taking inventory led to a couple of determinations: 1) I felt comfortable with the assortment of “might need it” items stowed away. 2) Among that assortment was a lot of sharp, pointy things. Tucked away throughout the Toyota were various knives and cutting tools — eight in total.

I knew they were there but hadn’t really thought about just how many were there. And none were among the equipment packed specifically for this camping trip. The tools always rode in my truck. There were three knives (two folding blade and one fixed blade) in the console storage. Two saws (a small, folding hand saw and larger bow saw) were behind the back seat along with a hatchet. A chopper/machete type tool was tucked into the deep pocket behind the front passenger seat, and a full-size ax was hidden underneath the back seat. I also had a small multitool and my faithful Old Timer pocket knife in my right front pocket where they always reside.

That’s a bristling array of blades crammed into one little daily driver truck.

While a pocketknife might be all you need around town, the tools that ride in my truck were chosen because I’m in the woods a lot and like to be prepared. As I placed the blades and saws back into their spaces, I recalled the times I was so thankful that I had them.

I’ll likely leave home without my britches before I leave without a pocketknife. But in case I forget the knife, there are always two more folding knives in my truck. My feelings about a pocketknife are analogous to how I feel about four-wheel-drive capabilities in my vehicle: I may not need it often, but I may need it in a bad way when I do. While a pocket knife hasn’t saved my life (yet), I can’t count the number of times it’s come in handy. There’s the basic opening containers to slicing potatoes for the camp skillet to cutting cord. I even used my Old Timer as a screwdriver — which is never recommended — until I got the multitool. Now, since the multitool has everything (because it’s a multitool), the Old Timer seems superfluous. But the nostalgic form and feel will likely keep it in my pocket for years to come. Also, it’s better for skinning squirrels. And who knows when or where that opportunity might pop up?

I use fixed blades only for processing larger game. They’re easier to clean without all the nooks and crannies of a folding blade. If you’re performing a knife task that requires a bit more force, fixed blades also eliminate the potentially weak link of a folding system. In a pinch, you can use a fixed blade knife for applications better suited to a heavier tool. My field dressing knife stays in my hunting pack, and the one in my truck is a backup, so, actually, I did not use this knife at any time over the last 12 months. But it’s going to stay in my truck anyway.

These four tools serve one primary purpose — processing wood. But within that purpose are numerous nuanced possibilities. The hatchet and ax are quick tools. If you need to limb a log or chop some kindling, you can do it fast. The hatchet and ax are also power tools, as in, they require a lot of power — from you — to get the job done. The sum of energy is dependent on the velocity of that hatchet/ax head, and your body will be generating said velocity.

The saws are more methodical, but less tiresome. You still have to work, but saws seem to be a more measured use of calories. Because of their required slower, more controlled pace, saws are also safer. Personally, I’ve used the hatchet and ax more than the saws, but I recall a fallen sycamore blocking a lonely two-track road one afternoon when all I had was the ax… which promptly wore my ass smooth out. And after that day, the bow saw has always ridden in my truck.

This is a hybrid tool. Mine is a Camillus Carnivore X I picked up at Walmart on impulse because it was cheap. It’s a hefty 12-inch blade with a saw on the blade spine and a gut hook/wire cutter slot near the tip. It can also be used as a digging tool. It’s not really a machete at all; it’s just a big knife with some additions. Actually, it looks gimmicky, and my cheesy taste may have been the real reason I bought it. But despite its pretentious appearance, the damn thing works and works well. It’s mostly replaced the hatchet and, though, its saw isn’t the best design, I can deal with it. The Carnivore X also has a surprisingly keen touch. The blade came near shaving sharp from the factory and holds an edge well. With this tool, I can hack through a thicket, cut and saw camp firewood, split the wood, and even shave some fuzz sticks for tinder.

Where to get outfitted

You can spend as little or as much as you want on blades. Often, the old mantra of “you get what you pay for” rings true. Any retailer that sells outdoor equipment sells blades or you can scour the interweb for the best of the best and order direct from a manufacturer. But I’ve picked up quality tools secondhand, or even further down the line, at flea markets and garage sales for a song. And when I look at them now, I think about their collected lore. I wonder how many campfires they’ve fueled, how many squirrels they’ve skinned, and how many miles they may have ridden in someone else’s truck. 