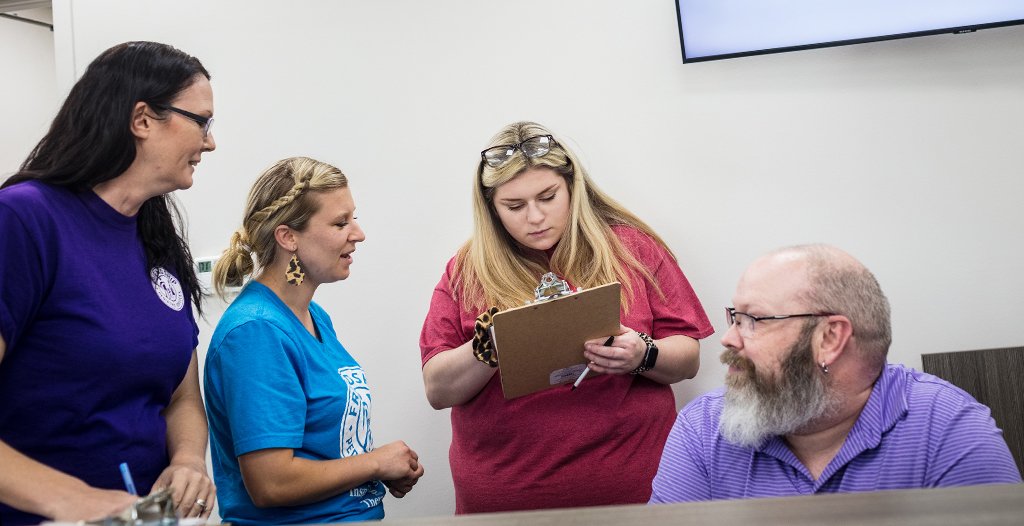 As the chief learning officer of Friendship Community Care (FCC), Angela Traweek has witnessed the challenges and triumphs of her organization. During her 22 years at FCC, Angela has also noticed a pattern. When she started her role, autism was only found in one in 10,000 individuals. Now, it’s closer to one in 50 people in Arkansas.

“The number of individuals with autism has increased substantially over the last two decades,” Angela says. And this increase in diagnoses has left a gap in services. “We recognized that individuals with an autism diagnosis would receive intensive services up through the age of 18 and then it just falls off.”

Angela saw the need for an organized program to focus on ASD needs and to give individuals a source of routine, aid, and comfort when there wasn’t any.

FCC’s mission started with an adult day-program began early this year called Hampton Place. It’s here that individuals can thrive and learn in a guided environment to be able to transition into independent living, job resources, and life skills.

The day program is very individualized, according to Taylor Middleton, director of Hampton Place at FCC.

An average of 20 people visit for a couple of hours every day while some are there for a full work-week-like schedule. Some have different goals and different achievements. No matter the differences, the focus of Hampton Place is the same: to help increase the quality of life for each individual served.

The program has been incredibly successful since its implementation. However, Angela and Taylor also saw the need for even more services as the number of individuals diagnosed with ASD is likely to increase.

The reason for more nuanced care is because autism is on a spectrum. It can affect individuals in different ways with some requiring more intensive help and others who can more easily work toward becoming independent.

“Any parent, whether their child has autism or not, is a little hesitant to see how their child is going to flourish independently when they leave the home,” Angela says. “When you have special needs, it adds another layer of insecurity for those families.”

A diagnosis often leads to the child living with their parents into adulthood. While continuing to live together works for some families, an uneasy situation can arise as they continue to live with their families.

With two houses already owned by FCC, the team realized an opportunity to utilize those structures to create a Living Learning Autism Center. FCC has created shared living spaces with the homes to include smart in-home technology for individuals who want to live more independently while receiving community care. It’s the first of its kind out of all 14 locations in Arkansas.

The new pilot program is set to have two houses with four bedroom spaces for the individuals. These also offer two-and-a-half bathrooms and a calming room designed to relax their overstimulated nervous system when individuals feel overwhelmed.

While the in-home technology can assist individuals without support from the staff, FCC staff can check in on the individuals by “buzzing in” without invading any privacy to see if tenants need additional care and support.

“There is evidence and research that has shown that individuals diagnosed with autism do very well with sensors on the doors, the windows, and the ceiling,” Angela says. “If an individual gets up in the middle of the night and maybe they wander, then our staff are alerted because it picks up that they’ve gotten out of bed.”

Self-help sensors and appliances, such as the stove, are programmed with a timer while an individual is cooking. The stove can shut off if it senses burning or if it becomes a threat to the other spaces.

Individuals with autism may be sensitive to lighting as well, so natural and LED lighting that tenants can control and dim as needed with a wall-mounted iPad installed in each bedroom. There’s also the option of color-changing light bulbs which can notify with different cues to the individuals as needed.

“Through the years, we’ve learned that individuals with autism respond better with non-verbal cues and non-verbal commands,” Angela says. “So, using different lights to help communicate with them — that now it’s time to go take a shower, or now, it’s time to go into work — helps them gain those independent life skills.”

“A lot of individuals with ASD have problems expressing themselves verbally,” she says. “So when we use this technology, it reduces the frustration that they may experience when they’re trying to communicate and the receiver is not comprehending what they’re saying.”

Not only can the pilot program participants work on their own self-growth, they are also provided social interactions with their roommates.

“Oftentimes when people on the spectrum see someone else do something, it helps them to see that it’s going to be safe and okay,” she says. “Ultimately what we’re trying to do is to help them feel safe.”

Parents of individuals with autism are often fearful for the safety of their children because they may have a tendency to fight or flee in stressful situations, she explained. However, smart home technology can relieve stress and provide support in an individualized and free space.

And, most importantly, the center can provide some security in bridging the gap between living at home and living independently.

“A lot of individuals are teenagers and in their early 20s, some are in their early 30s,” Taylor explained. “But they’re still going through the same stages of life that anybody else goes through. It’s just that they’re maybe going through it a little differently than everyone else. So you’re trying to give them that normalcy and the most meaningful life that you could possibly give them.”

What each individual does with their day is on a case-by-case basis. Some will have their own schedule and go to their own jobs. And some may go to Hampton Place with Taylor.

Although there aren’t any individuals living in the Living Learning Autism Center just yet, Angela and Taylor are certain about the benefits the housing will have based on the successes of Hampton Place.

“I can count on one hand the behavioral (outbursts) we’ve had,  and those weren’t significant. They were minor things that we dealt with,” Taylor says. “With the structure and routine and consistency, and the training that the staff here have, it helps to anticipate behaviors before they happen. That’s been the advantage and that’s been our testimony so far up to this point. It’s been our success story for the whole group.”

There are around 20 participants at Hampton Place now, and all 20 are actively participating in the schedule that the program sets up. With a Living Learning Autism Homes, Taylor can only see increased improvement from those spaces.

“What we’re doing is good, but it’s not going to be as effective if we don’t have the transition or carryover at home,” Taylor says. “The way this model was set up, we’ll have that carry over throughout the entire day, even into the home setting, which is truly beneficial and effective.”

The goal is that the pilot program can expand and thrive in all FCC communities of Arkansas, according to Angela.

“The biggest success story is somebody lives there, gains some job skills, and gets a job in the community. And they learn enough while they’re living here to be able to live and move out into an apartment or one-bedroom by themselves with a little bit of support,” Angela says. “We have seen individuals with autism get gainfully employed and do very well.”

As those successes happen, Angela and Taylor can continue to focus on the needs of each and every person.

“I think the writing on the wall is that we’re going to see even more individuals with ASD,” Taylor says. “If we can fine-tune this and learn exactly what works now, I think we can be proactive in developing the best treatment for each individual served.”