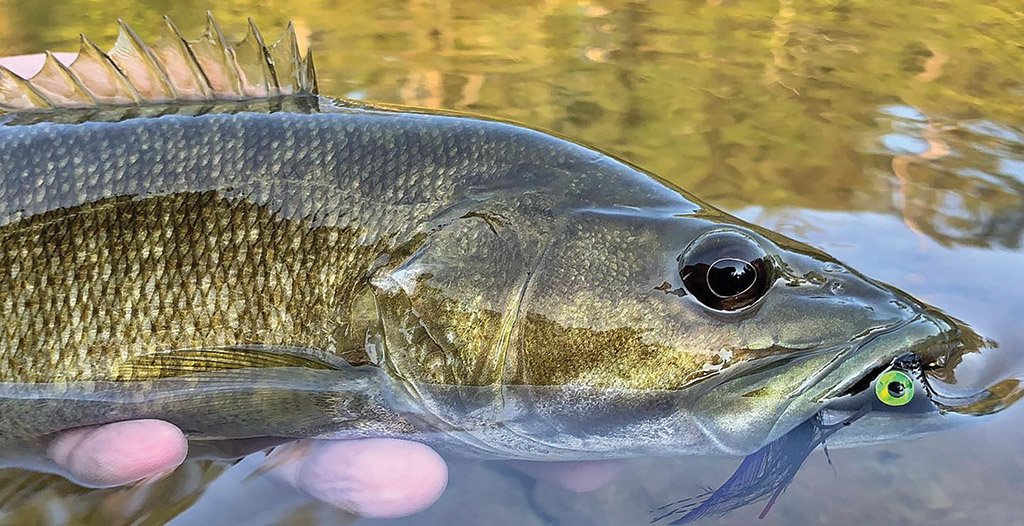 Ripples have long since faded from its last gurgle as the black popper sits motionless on the mirror surface. The calm harbor it rests in is formed by a quarter-circle of boulders choking off the current as it races silver across algae-slick rocks. The pool is small for this creek but more than waist-deep. And it’s the only still water among the riffles before the shoal dumps into a much larger pool of aquamarine twenty yards or so downstream​.

It’s classic smallmouth holding water. There has to be a fish in here.

When smallmouth in moving water decide to take a fly, they tend to be hyper-aggressive because when you make a living in current, you’ve got to act fast. Food is always on the move and the window of opportunity is closing at precisely the same moment it opens. The indecisive mouth goes unfilled.

Often, when I’m fishing swift water, two or more brown bass will charge the fly as it tumbles through riffles or drops into tiny pockets. I once watched a pack of smallmouth so frothed to predatory fervor that they pursued a fly right out of the water as I stripped it in for another cast not knowing it was being followed. When the melee was over, two fish were nearly stranded on the rocks, saved only by their survival-mode tenacity. Another time and in a different creek, a hunting group was so caught up in the chase that they became oblivious to the capture of their brothers and sisters. It was as though the pursuit had locked them into a bloodthirsty trance as I hooked and landed — on consecutive casts — every single member of the gang of four that had followed the olive wooly bugger to my feet.

Smallmouth venture into the fastest water only to hunt; even novice anglers can catch them, and maybe a big one now and then, in the riffles. That’s not how smallmouth behave when they fin around in pools, though. The thing about pools, when it comes to stream smallies, is that the indifferent nature of the water permeates the fish’s personality. The wheat and the chaff are separated in pools.

Still-water smallmouth bass are a suspicious lot, especially the old ones. The queen bass of a pool knows precisely who and what is in her queendom at nearly all times. She knows that in the relatively open water her speed can overtake any prey making a desperate dash for rocky cover. And she knows that everyone else under her rule knows the pecking order. Time is on her side.

So when the vibrations of a popper reach her lateral line and her quick eyes laser onto the source, there’s no sense of urgency in her. There is, instead, a growing but cautious interest followed by stringent inspection. It’s in pools that the angler’s offering is judged most honestly and most harshly.

If you can get the fish to strike you’ll convince yourself that she fell to your wisdom and skill. And if you can stick a hook in her you’ll know that within the whole county (maybe the state) it was probably only you who could pull it off. You’ll take note of just how you wriggled the popper, how soft or loud the “pop” was, and you’ll file it all away as gospel for the next time. You’ll write a little “how-to” and post it in your Facebook fishing group or maybe even try to sell it to a publication.

And if you never see a fish, you’ll be convinced that your angling time would be better spent dunking worms in the stock pond.

But despite my delusional notions of defining mastery, there’s far more to success or failure in the pool than the angler’s abilities. There’s no guarantee that anything will make the fish strike. She may be full. She may have a hankering for June bugs and your offering too much resembles a moth. There may not even be a smallmouth in this section of creek. What happens once the fly hits the water is largely up to the X-factor, the wild unknown. Locked within these delicious moments of uncertainty are the reasons I fish.

There’s an old joke about an angler who, after shucking his mortal coil, finds himself waist-deep in an ethereal stream flowing through woodlands of empyrean beauty known only to those who have passed on to the next realm. He holds a fly rod seemingly crafted by the hand of divinity and every gorgeous cast to every stitch of water, all of which looks as though it could hold the fish of his dreams, produces just that — the fish of his dreams. The sun never sets, time stalls, and the angler never grows weary as he hooks and brings to net one spectacular bass after another for what seems an eternity. But as each new bend in the creek brings more action, the angler comes to the sobering realization — this place is most definitely not paradise.

After more than a minute of stillness, I twitch the popper, trying my level best to make it imitate a crippled cicada. In the pool’s depths, I convince myself that a hazy silhouette slowly rises but never high enough for me to clearly see it. I sense an assessment made on my offering. I understand that control of this future is totally out of my hands now.

In these seconds of pure possibility, I know that I’m not here to catch the fish. I’m here for this singular moment. I’m here only to find out what will happen next.