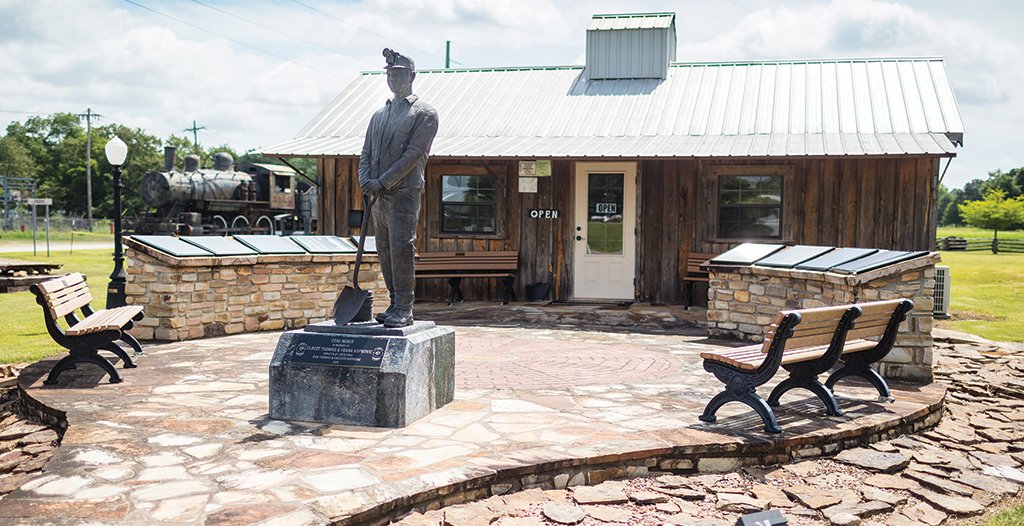 The dream of one man, Robert “Bob” Thomas, became a reality on October 2, 2010, with the opening of the Paris-Logan County Coal Miners Memorial and Museum. In 2004 Bob was interested in writing a book about mining and was interviewing local miners when it was suggested that it would be nice to have a memorial for the miners. That suggestion became his life’s work. In 2005, Bob enlisted volunteers to help plan and fund the project. The Paris City Council approved 2.5 acres of land for a Coal Miners Memorial. With Bob’s death in 2006, the completion of the project was entrusted to the Memorial Committee.

Arkansas’s coalfields are located in the Arkansas River Valley between the western border of the state and Russellville, encompassing an area about 33 miles wide and 60 miles long.

In Logan County, the first coal was found by 19-year-old Robert Dayton Waddell in 1866. He was a blacksmith’s son and was searching for material to burn in his dad’s forge. They used charcoal for his furnace because hard coal was scarce and costly. Robert discovered a small outcrop of semi-anthracite coal about three miles west of Paris. His dad made him a pick and other implements to remove the earth surrounding the coal and Robert dug four tons of this coal. What his father didn’t use was sold to nearby blacksmiths for 75 cents a bushel.

A survey of Arkansas’s coal fields showed a coalfield that ran from the northeast edge of Paris and extended west approximately eight and one-half miles under both Short Mountain and Horseshoe Mountain. The seam then pitched south from the outcrop and was 18-36 inches thick.

Coal mining got a slow start with primitive tools and little knowledge until the first coal mine was opened in 1881 near Paris. Surface mines were the first to open then slope mines began operation. Slope mining is where mining followed the slope of the natural coal. Steel tracks could be laid and the coal removed by coal carts. Local blacksmiths made wheels for coal cars and rails to run into the mines.

After it became harder to mine the remaining coal near the surface, underground mines developed. A vertical shaft was sunk then horizontal tunnels or rooms were dug following the coal seam. The coal was lifted to the surface and placed in coal cars.

The railroad had a large effect on the coal mining industry and the town of Paris with the St. Louis and San Francisco Railway extended south to Fort Smith in 1887. The population of Paris in 1890 was only 547, but soon people began moving to the areas around the coal mines for employment. After construction of the Arkansas Central Railroad line from Fort Smith to Paris in 1897, large-scale mining began and soon 31 privately owned coal mines operated in the Paris area employing 2,000 miners.

Early coal miners in Logan County lived in tent cities and moved from mine to mine with their families. They stayed for a few months and then move to the next mine. The mines paid 75 cents per hour.

The mining tools and conditions were primitive at the beginning. Miners worked 10-hour days with a pickaxe a shovel and a helmet. Once slant and underground mining began, the miners pulled blindfolded mules into mines to carry the coal out. Sticking Tommy candles or carbide lights were the only light in the tunnels. Hand augers were used to drill a hole in the seam and to place dynamite to explode the coal to bits and the caves were held up with timber posts.

Miners in underground mines worked on their backs or knees all day in the small tunnels. Here the constant threat of cave-ins, gas poisoning, or explosions made it more dangerous and inhaling coal dust had long-lasting effects in the form of black lung disease. Their helmet lights changed to battery-powered electric because a spark from the carbide light could cause an explosion and a filter was inserted in the helmet that changed color with gas detection.

Larger coal mining companies provided housing for the miners along with a company store, and as new machinery was invented coal output grew.

The mining machine used to undercut the coal looked like a large chain saw with a swinging cutter bar. The miner would use a pick, hammer, and wedge to break out the coal. The mining machine moved along the face undercutting the seam. A large log chain was pulled to the face of the coal and with a jack wedged between the roof and bottom to hold the chain and coal fell as it cut.

Longwall operations began using the face track, conveyor, and scow pan. The face track was used by laying track along the coal face and cars were pulled along by a hoist. The men loaded the cars then the cars were hoisted to the seam and out by mules.

The longwall conveyor was most often used in Paris. This was used on a narrow coal seam where a miner would work the seam and put the extracted coal on the conveyor that rotated to the surface. This was the most economical operation and increased the output.

The scow pan was a large flat metal plate used in conjunction with the mining machine. It was placed under a large block of coal and wedged down. It was then pulled to the surface where it could be broken up. At the surface, all the coal was sent to a washing station where it was washed, sorted by size for orders placed, and then sent to the train depot for shipment.

Although mining conditions had improved with these new inventions, explosions, low wages, and poor working conditions caused miners to strike. In 1890 the United Mine Workers of America (UMWA) was formed. Miners were fighting for an eight-hour workday in 1898, bargaining rights in 1933, health and retirement benefits in 1946, and health and safety protections in 1969. By 1933 all miners were members of the UMWA.

At the height of the coal mining industry, an average of 250-300 tons of coal was shipped daily to northern markets. During the eight-month mining season, 13,000 railroad cars of coal were shipped from Paris mines The flourish lasted until the 1950s when the demand for coal in the north diminished in favor of other fuels, and the coal seams were exhausted.

Located at 804 South Elm Street in Paris, a life-size bronze statue of a miner stands proudly in front of the museum equipped with a shovel and lunch bucket with a carbide light strapped to his helmet.

Commercial mining in Logan County began in 1881 and lasted until the mid-1950s. In those 70-plus years, 2,869 men and women worked in the local coal industry. The names of those who worked, owned or operated the coal mines in and around Logan County are displayed on plaques set into stone surrounding the statue.

The museum’s 2.5 acres are appointed with brick walkways and benches. Large equipment used in the mines such as an air handler, a coal car, a mining machine, and a barbecue grill made as a replica of locomotive Engine 2522 is on display. Also on the property is a full blacksmith shop displaying tools of the trade. There’s even a coal miner’s house that was once located at the foot of Horseshoe Mountain near the Dixie #2 Coal Mine. An old steam train “old Engine 2522” sits beside the museum. It is one of only two known surviving Missouri Pacific steam locomotives in the U. S.

The museum’s top priorities are educating the public about coal mining and coal mining equipment restoration. Both of these goals are accomplished by preserving the history and honoring the thousands of men who worked in the coal mines.

This one-room museum contains photographs, maps, books, pamphlets, and artifacts from the height of the coal mining era. Every piece of memorabilia has been donated by a miner, a family member, or a friend. A shelf of the different headlights used by the miners is on display. Of these lights, the “sticking Tommy” was most unusual. It is a wrought iron bar with a candle holder on one end and a spike on the other. It hung from the miner’s hat until he reached the coal seam and then it was stuck into a crevice for light. Also used were carbide lights with a metal container for the powdered carbide and an oil container. These lights had the carbide powder poured into the light with a few drops of oil and were lit. The first, very heavy and clumsy, electric battery lights are on display as well. These lights were used when a mine had too much gas inside to chance a stray spark causing an explosion. Another novelty here is a collection of cave pearls. These spherical shape is formed in caves where water is too swift to form stalagmites. The “pearls” are made of calcium salts and are about the size of a baseball. Polished by water, they feel smooth to the touch and are usually found in a ring or nest formation.

One of the books for sale in the museum is Paris Arkansas & Its People. Written by Robert Thomas, the book includes his interviews with the miners and their families. Sales from the book help fund the non-profit museum which is also partially funded by the city of Paris but relies on donations for continued operation.