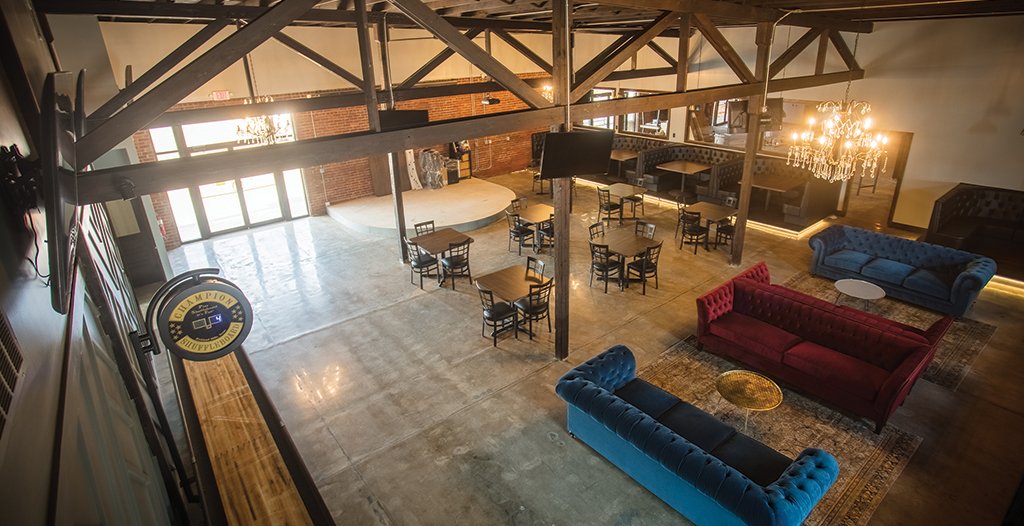 This is ABOUT’s third installment of features telling the stories of a few iconic downtown buildings found in the River Valley — what they once were, what they are today, and how they’ve influenced their communities. We invite you to read the history that led to the present and think on your own memories of downtown’s yesterdays. But we also hope that these pages can help you to envision downtown’s tomorrow.

Arkansas Brewing Company is the newest tourist destination in the heart of Ozark, Arkansas, with owners and staff who have a passion for service, dedication to fun, and above all appreciation for craft beers and good food.

Located at 201 S. 1st Street, this new-concept brewery has a modern menu brought to you from a Johnson and Wales University graduate, where esteemed Chefs Emeril Lagasse and Tyler Florence graduated. Chef Brad has been in the culinary industry for over 25 years and provides a menu packed with flavor. The brewery focuses on dark and full-flavored beers –- ales, stouts, and porters. They offer a classy, upscale pub-bistro setting, full bar, shuffleboard area, a stage for live music, televisions all around, a viewable five-barrel brewing system, and a covered, outdoor patio.

The business is within walking distance of the Ozark Historic District and has a view of the Arkansas River. Owners Christopher and Destiny Brockett and Eric and Deanna Meadors hope to provide a stop off for visitors traveling through on their way south to Mt. Magazine and north toward Fayetteville to experience Ozark hospitality.

The journey toward making the brewery a reality started with two ideas: the desire to restore a historic building and the desire to brew beer. When Christopher moved back to Ozark in 2011 he saw the building as being something special for Ozark. He tried to buy it for years in an effort toward historic preservation. He had joined Main Street Ozark and wanted to help in the effort of downtown revitalization. Then, finally, in 2020 the building on S. 1st Street was theirs. In 2020 Eric Meadows wanted to be involved in restoring an old building and making beer.

“I was in a beer club in 2012 with a group of friends, and with the help of YouTube we started making beer for about two years,” Christopher said. “We all wanted to make it bigger and better so we all invested in a 25-gallon home brew system. However, about six months later, life happened and I wound up buying the rest of the group out. I’ve had the equipment since 2014 and made beer off and on.” 

Christopher even purchased the Arkansas Brewing Company name in 2017. The new system can make up to 155 gallons at one time, which will keep the current brewers, Eric, Deanna, Charlie, Blake Bynum, Christopher, and his son, Caleb busy.

According to their Facebook page: “2018 (involved) lots of travels and lots of beer drinking led to four friends talking about a brewery. Every Friday lunch, every trip we took, beer was most likely involved. So why not, surely everyone else wants to drink beer too, right? We visited every speakeasy in Kansas City, every brewery we could find in multiple states, for research, of course.”

Trying to establish the building as a historic site, the new owners did a massive amount of research on the building, land, and previous owners and uses. They found the land belonged to J. R. Davidson until 1944 when he sold it to W.M. Cochran. Mr. Cochran built the commercial red brick building with a flat tar and gravel roof. Mr. Cochran sold the building to Cochran Wholesale Company in 1946. The railroad tracks were directly behind the building. Before the end of World War II, siding tracks were approved to come up to the back of the building.

In 1983, the Hensley’s donated the property to the City of Ozark. Previous owners cut out some beams in the building so they could use the building to store trucks and road equipment. The City of Ozark continued to utilize the building for storage until 2020 when it was bought by ABC Holdings LLC, the entity that Christopher, Destiny, Eric, and Deanna own.

Although the owners found everything about the history of the building available, it wasn’t enough information. The main reason was that the Franklin County Courthouse was burned several times – during the Civil War, again in the 1920s, and a third time in the 1940s which caused the loss of historical records.

The renovation began in 2020. They did not work with an architect. Eric Meadors served as general contractor and various aspects of the project were subbed out to subcontractors.

The Heating and Air system was completed by Dustin Hillard/Anderson Heating & Air of Ozark, Inc. Electrical was completed by Randy Chambers/Ace Mechanical of Ozark, and the Plumbing was completed by Randy Jackson/R&K Plumbing of Ozark. The majority of carpentry – roof repairs, construction of interior walls, installation of replacement windows, women’s bathroom tile, building the bar and stage and booth platforms, and interior trim, and probably more not mentioned – were all completed by Phillip McIlroy and Michael McIlroy. AVCOR of Austin, AR ground and polished the concrete floors. The metal roof and the covered patio were completed by Benny Lowery Construction and his brother, Marty Lowery Construction, both of Cecil, AR.

Christopher, Eric, his sons Charlie and Michael completed the initial demolition of the building’s interior in 2020. They took down all the old walls that were termite-infested and rotten. Once demolition was completed and the roof was repaired they built the brew room’s wall and framed in the small bathroom area. They also built the primary wall that separates the main dining area from the overflow/meeting room.

The roof damage was extensive and Christopher Brockett said, “This building was essentially termites holding hands.” Of the 90 trusses, they had to replace more than 60 due to termite and water damage. Of the three main support beams, only one had a 15-foot section of termite damage, which was repaired. “We saved all we could.”

Once the roof was stripped off in the damaged areas, they found two names in concrete on the top corner of the building. Don Anderson and George Wornkey who were possibly the original bricklayers in 1945 were preserved in the very structure of the building.

Eric restored three old wooden doors from the original building and they are being used on the bathrooms and the office area, stained all the wood that was in the interior to match the original woodwork. He also cut the concrete floors to install new plumbing and drains.

When the building was purchased it only had three existing windows in place and these were 1970s retrofitted, single-pane windows and not original to the building. They saved those windows and used them as windows in the brew room wall. They replaced all windows with vinyl-coated energy-efficient windows.

The old metal doors on the west side of the building (kitchen entrance and emergency exit doors now) had age and rust damage and were replaced with new metal exterior doors. Two roll-up doors that were retrofitted in the 1970s were removed and replaced with two six-foot entry doors. The wooden slide doors that provided access to the railroad tracks were both removed and glass roll-up doors were installed.

Originally the building had one bathroom, no central heat or air, and a wood-burning stove in the middle of the main room. They added bathrooms, installed energy-efficient heat and air units, four mini-split units, and six eight-foot ceiling fans.

The plumbing, including the exterior sewer pipe, was all cast iron and no longer working properly. All the plumbing was removed and new pipes were installed inside and outside,

The existing electric wiring was old with some Romex and some knob and tube. All electrical wiring was removed and electrical boxes and replaced with new electrical wiring to code to ensure we could run the kitchen, all new light fixtures, and brewing equipment efficiently. In addition, because they are planning live music, they added a four-zone sound system so that no matter where you sit, either right in front of the stage, at the bar, the meeting room, or on the patio, you can hear the music without having the music so loud you can’t talk to your friends. This system allows them to turn the music up or down in separate zone areas.

For safety, emergency lighting is in place on each door for exit signs. They have monitored smoke, carbon dioxide, and alarm systems installed.

The brick exterior was in good shape. The walls were made fireproof with a three-brick system, about 18” thick.

The owners worked with Main Street Ozark’s interior designer, Susan Shaddox, to determine room sizes and where walls would go for each room, and a color scheme to suit the historic period of the building.

The concrete floor in the 5400 sq. ft. building had to be leveled. In some places, the floor had to be raised by pumping mud underneath the building. In others, it had to be ground down. As a finishing touch, the floors were polished.

Christopher and Eric’s wives were involved too. Christopher’s wife, Destiny, took charge and designed the interior. She had a design in mind and then found the lights, chandeliers, and paint that matched her design ideas. Eric’s wife, Deanna assisted with the history of the building research and also helped pick the custom velvet couches for the brewery’s seating area. The remodeled interior is a mix of old and new with an Industrial Modern design.

Renovating a building in 2020 was difficult due to the Coronavirus pandemic. Delays in construction and delays in equipment delivery caused the proposed opening date to slip. Christopher said, “Our maximum budget doubled and our timeline tripled since starting the renovation. He quoted Nelson Mandela, ‘It always seems impossible until it’s done.’”

Christopher wants everyone to know that “the best beers are the ones we drink with friends. So come in for a beer and stay for the friends.”