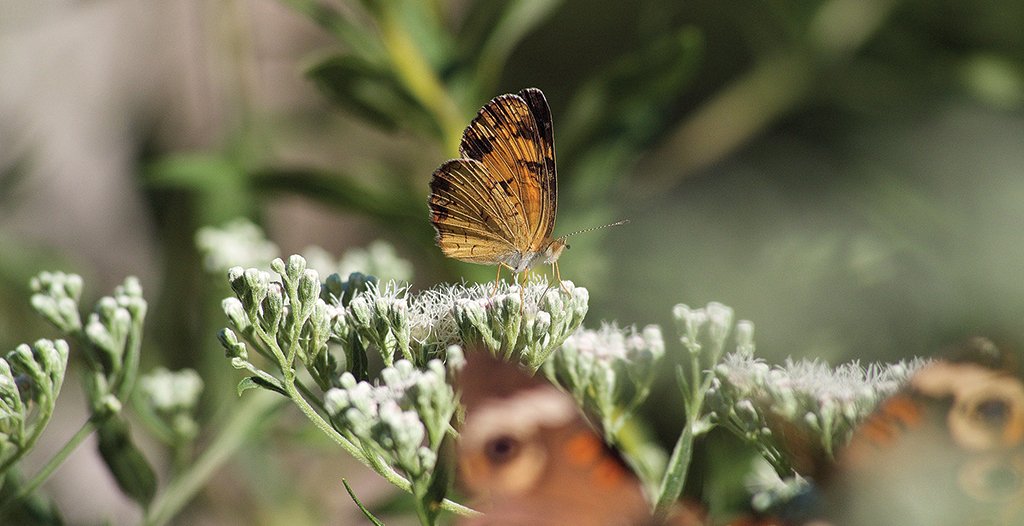 The flowers in these photos are late boneset. It goes by a few other names — lateflowering thoroughwort, white boneset, and late-flowering boneset. It’s scientific name is Eupatorium serotinum and it’s a member of the aster family.

Late boneset is a native Arkansas plant, common in overgrown pastures, forest openings and along roadsides throughout the eastern U.S. and westward as far as Kansas. If you’ve ever done any brush hogging in a field gone feral, you’ve likely mown tons of it. Most people consider it just another weed.

But like so many other things we know only from a distance, there is much more to late boneset. Native Americans and early settlers used it for medicinal purposes, hence the name. Late boneset also has the intrinsic value of simply being native to the land. It’s part of a system that formed millennia before humans arrived in North America.

Late boneset is also a pollinator bar hotspot. The rotating number of species that find this plant irresistible is astounding. Just this year and on this one plant I’ve witnessed butterflies such as buckeyes, hairstreaks, skippers, and monarchs; three types of wasps; an ailanthus webworm moth; beetles, honeybees and a chartreuse crab spider waiting in ambush. Of course, the crab spider wasn’t there for the nectar.

This particular plant in the photo is a component in one of my many native wildflower beds. It’s the stopgap, along with frostweed, as cone flowers and butterfly weed wane along with the summer sun and golden rod is just thinking about a bloom. Given the diversity and number of pollinators clinging to the snowy petals at any given time, the nectar must be absolutely delectable. And nectar-sweetened pollinators probably taste like candy to the crab spider.

Flowering late boneset releases one of the most pleasing and potent scents of any native wildflower in our region. I can smell it within 50 yards downwind, and given the heightened olfactory powers of insects it’s likely detectable to any pollinator flying through the neighborhood. To be honest, I’ve often wondered if I should follow the lead of the bees, beetles, wasps, and butterflies and have considered chewing on a flower myself just to see if it tastes as sweet and intoxicating as its perfume.

With the office window open, late boneset’s lacy fragrance wafts through the room as I work. It’s a signature scent of September and a welcome distraction. It pulls at me to me get outside and enjoy these glorious days as the cloak of autumn draws ever tighter.

And if you see pollen in my beard later this afternoon, you’ll know that I tried a nibble and learned that the bees and butterflies and wasps were right.

{Note: You should never, ever ingest any plant unless you are absolutely 100 percent sure it’s safe.} 