Discovering self through art 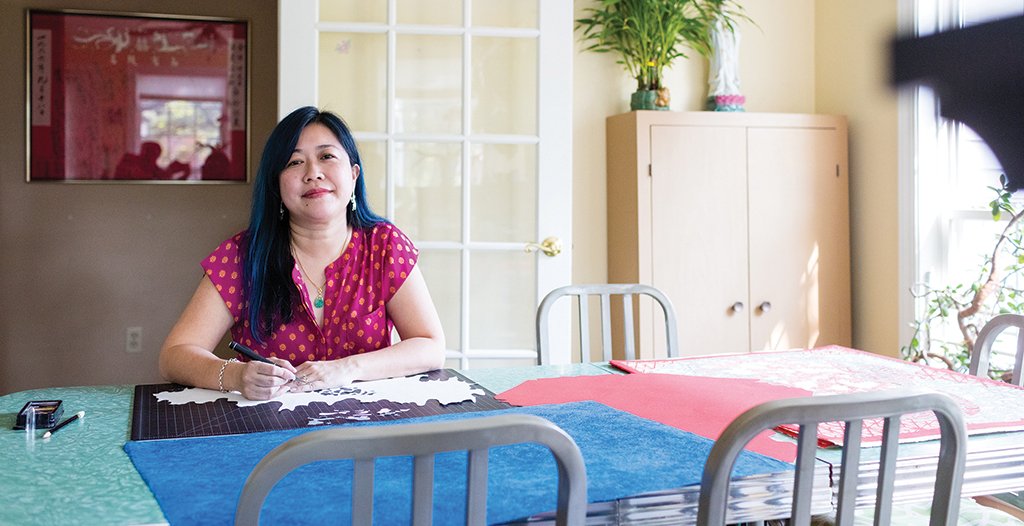 Growing up in a home with immigrant parents, Tammy Harrington figured out early that she did not fit neatly into a box. Her art, particularly self-portraiture, resonates with her continued search for who she is. Sometimes her creations, most often manifest in the form of papercutting, are crafted in her shop. Sometimes she creates it on her dining room table. But within all is the resounding message of a woman on the road to self-discovery.

“I’ve always done artwork about myself, typically self-portraits,” Tammy says. “I can’t seem to get away from it even though I’ve had opportunities to do other types of work. It’s using my experience and my background to fuel the visuals. But, the visuals also fuel an understanding of who I am.”

Tammy’s parents immigrated to the United States in 1968. “I was born in the United States, so I am an A-B-C, an American Born Chinese,” Tammy says in her self-described South Dakota accent. “It’s almost like a dual life. I had a Chinese life in the house — eating traditional Chinese foods and traditional decorations; I had a grandmother that lived with us.But I also had the outside environment of television and shag rugs of the 1970s. There is a Chinese part of me and an American part of me.” she adds with a laugh that sometimes people tell her she speaks very good English. “There is a ratio of what you’re going to get, and it depends on whether you look at me or if you talk to me.”

As a first-generation American, Tammy can understand the language of her parents, but does not speak Chinese well. This is partially because. just like nearly every other kid, she didn’t want to look or sound different. “I didn’t speak very fluent Chinese because when you’re growing up you want to blend in,” Tammy says. “It’s also hard to learn a language if it’s not pushed in the home.” Tammy’s parents were hard workers, which meant that family time was limited to sometimes only one night a week. And, if she were to take classes to learn the Chinese language, she would be taught Mandarin rather than the southern Cantonese dialect of her parents.

While visiting Hong Kong, an aunt once told her that she wasn’t really Chinese because she didn’t speak Chinese. This left Tammy feeling confused and unsure of how exactly she fit into the world. And, even today when she meets students from China, understanding the customs and culture is often a challenge. Tammy says she feels the strongest connections with those who share similar life experiences, particularly first-generation American children, and those experiences have propelled that exploration into her own self-discovery. “I didn’t really understand that until I started doing art,” Tammy says. “They feed each other.”

Other than being raised in an immigrant home, Tammy had a similar upbringing to just about anyone else in Sioux Falls, South Dakota. As a young student, she loved art, gravitating to graphic design for commercial art and Photoshop. She describes it as, “I used an old process (film) camera and set type on an old press for the old techniques. So, I’m an in-betweener in terms of learning the old processes, but then getting exposure to the new.”

After high school, Tammy attended the University of South Dakota where she met her husband of 24 years now, Neal Harrington, also an artist. She describes herself as the more methodical of the two. They attended Wichita State together, eventually settling in Russellville where Neal is a professor of art at Arkansas Tech University while Tammy is a professor of art at the University of the Ozarks in Clarksville. Raising two children who attend Russellville Schools, Jake and Olive, they’ve had support from her parents who now live with them.

Tammy eventually found her artistic niche in printmaking, relief art, and hand-pulled printing. And while Tammy seems to compartmentalize her identity, her artistry is also designed in components, or pieces, that she combines with particular colors to create a mood. She finds inspiration in the traditional symbols of the stylized papercuts, which blend her heritage with her love of the printmaking technique.

In a favorite piece, Tammy’s papercut multi-layer artistry begins with a red grid of latticework. Using color and variations of self-portraiture poses, she illustrates a woman underwater then in the air — both in dangerously tenuous positions. Tammy also has a newly created piece that utilizes red with a green hiding face to illustrate conflict and, yet, harmony. Her art portrays the female experience through an Asian perspective. A figurative design with combined elements of patterns and color brings a nostalgic “folklore” feel to her artistry.

“The work I’m doing now is Chinese papercut,” she says, “which is a style of folk art that is very old and a very simple concept,” Tammy explains that the layering of the cut pieces of paper that connect to each other become a single unit. She describes the essence of a traditional papercut as a cultural connection with utilitarian value.

“Traditionally, they would feature different superstitions and symbols that may celebrate a holiday or gods,” Tammy says. “In the old days in China, they would have windows that didn’t have glass to put in the windows. So they would put up paper.” The papercuts became an ideal way to decorate because they would still allow light to come into the house and were easy to change as the homeowner chose.

“It’s very much like relief printmaking. It has a crisp line because you’re using a knife to cut it out.”

Tammy’s male dragon and crane papercuts, derived from the traditional symbolic design, are a departure from self-portraiture. She did not connect artistically with the imagery in ink, but found that in papercut form she did. “I like the idea of the folklore of it,” Tammy says. “Especially when I had my children. You can put good luck symbols in clothing. There is a necklace with a tiger that scares away evil spirits. I love the whole idea of how you control your destiny or existence with those images.”

Tammy says she is inspired by the art of Yuji Hiratsuka, who utilizes a contemporary style of Japanese artistry. She’s also influenced by Delita Martin, who applies collages of paper and the work of Lisa Krannichfeld who also experienced two cultures intertwined with a focus on women — specifically, a figurative illustration of the Asian female experience.

Tammy is quick to point out that art isn’t an entity unto itself. Aesthetics inform and shape our everyday existence “Which pen did you choose?” She asks. “Why did you select your phone case? Why did you select your clothes, your car, your furniture? The visual component of our lives is influenced by art, even the uniform that is worn by your favorite sports team.”

As a professor of art for the past 20 years, Tammy is looking forward to normalcy after a challenging year. “We need to be around people,” Tammy says. “Even the most introverted people like to be around people in some capacity. That’s what is so important about college. That’s where you’re truly going to find your people.”

While Tammy conveys wisdom to her students, what she receives from them in return are the prized moments of seeing students come into art as their own. She says students need to discover what it is they want to do and not merely mimic the professor. Since U of O has a small program, Tammy works closely with the students for several classes. She finds immense satisfaction when they finally figure out what they want to pursue as their main emphasis and she is able to help them develop content.

“I want you to figure out what’s the best technique for you,” she explains. “They have to decide what kind of message or story they are trying to tell. Most of the time it ends up becoming something that is important to them. I have had students talk about their learning disabilities. They talk about their family. They talk about their experience with specific political things. A lot of students have done artwork about the pollution in the ocean. I like the diversity to help them push out their message.”

Tammy wants to see her students continue as artists after graduation. It should be no wonder that the professor whose superpower is self-discovery is gifting the same to her students.

Tammy Harrington will present a solo exhibit from May through July, 2022, at the Arts and Science Center in Pine Bluff and will be adding to her studio of completed pieces for the exhibit.

If you would like to see more of Tammy Harrington’s pieces, visit her at www.tammyharrington-art.com.