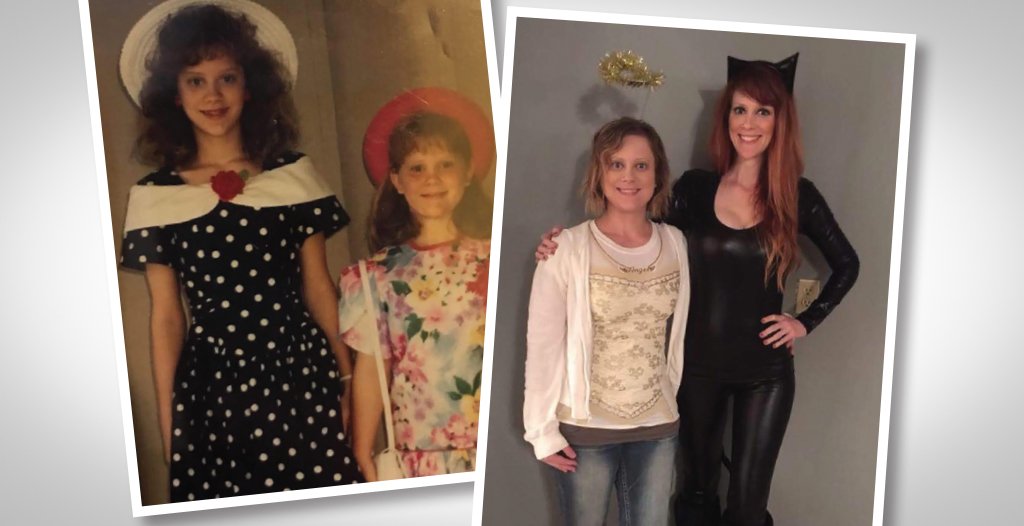 Since this is my sister’s birth month, I have been contemplating how much I appreciate her and how much she means to me.

Amy is a critical care nurse at St Mary’s hospital, and for the last year and a half, she has been worked to the bone, tirelessly caring for COVID patients. I feel as if I have barely seen her since the start of the pandemic and often find myself recalling fond memories we’ve shared. In particular, her more ornery moments.

Since she is my older sister, so much of my childhood was spent looking up to her, learning from her, and of course surviving the pranks and relentless teasing.

My favorite cereal was once Raisin Bran, but one morning she told me the raisins in my bowl were dried beetles. Needless to say, I have never eaten Raisin Bran again. On another occasion, she tricked me into drinking buttermilk (which was my least favorite thing in the whole world when I was young) by putting a pink straw into a cup and telling me it was a magic straw that would make everything taste like strawberries. It did not make that buttermilk taste like strawberries, but it did give me such a shock that I spit buttermilk everywhere — including out of my nose. I swore to my parents that I could smell spoiled buttermilk for weeks after that.

But the worst offense she ever did was taking my witch finger. My witch finger was a random game piece from a game that I can’t recall. But it was a rubber “finger” with a pristinely painted red fingernail that fit snugly over my six-year-old pointer finger. And this was imperative for me to be able to play QVC Jewelry Showcase.

You see, for those of us that lived in more rural areas in the ‘80s, after the seven o’clock news, there were only infomercials and QVC. And those ladies who pointed to and paraded about in gemstones and coveted diamonds on QVC always had pristinely painted red fingernails. But one day she hid the finger from me, and I’m not sure I’ve ever gotten over it.

As infuriating as those moments might have been, those are still some of my fondest childhood memories. Since I was curious as to what other siblings did to sweetly torment one another, I reached out to some readers and asked for their fondest, yet funniest sibling memories.

“My brother and I used to wake my sister up on random nights of random months and tell her Santa came! She would run downstairs all excited. No matter how many times we did it she always believed it. I feel so bad that we did that now!”
– Joy H.

“I love pickles, always have, and my sister would offer me her ‘pickle’ from her sandwich, which was really a jalapeño. And then, since she was taller than me, she would hold my drink well above my head. I would get so mad but I fell for it every time!”
– Kristyn B.

“My brother and I shared a bathroom for the longest time, and every morning while I was brushing my teeth he would pull my ponytail, jerking my head back and make me get toothpaste all over my shirt. There’s no telling how many days I went to school with toothpaste all down my front.”
– Jenny C.

“I had the measles when I was six, and my younger sister brought me a mirror to show me how horrible I looked. When she said her prayers that night, she prayed — loudly — that she never got the measles and looked as ugly as I did. I cried for two days straight. Not because of the measles but because I thought I would be ugly forever. But after I two days I didn’t care anymore because my sister got the measles, too, and I was content that we would at least be ugly together.”
– Jane C.

“My sister would tell me she would give me $1 million dollars if I would take her spanking for her. Luckily my parents didn’t let me make that trade, but I would always be so mad and felt like they cheated me out of $1 million dollars.”
– Ronnie H.

“My older sister was so grossed out by everything and would gag so easily. My brother and I would torment her at dinner by saying ‘that piece of bread fell on the floor earlier’ and she would be too grossed out to eat it. Then my brother and I would split it. My parents finally had enough when we told her that old man Michaels, our neighbor down the street, who had the worst teeth and even worse breath, had taken a drink of her milkshake so we could drink the rest of it. We had to use our allowance for weeks to buy her one every weekend for a month!”
– Jim B.

“My siblings and I have a lot of Native American heritage, but my sister and I are blonde whereas my brother is dark skinned and dark headed. When he was little I would tease him and say he was adopted from a Hispanic family. It was all fun and games until he wrote “I am adopted from Mexico” on a 10-facts-about-me worksheet when he was in second grade. My mom was really mad.”
– Jocelyn B.

“My family had a small farm when my sister and I were growing up, and she would always get so attached to any animal that was the runt or sickly at all and want to care for it. But sadly, a lot of them didn’t make it. My mother made liver and onions quite a bit and I would tell my sister it was the liver of whatever animal that had just died. It wasn’t until my sister told me that she held a grudge against our late mother for being so cruel that I had to come clean. I had no idea she even remembered that!”
– Earl H.

“I feel completely cheated out of my childhood because my brother told me zebra cakes were made out of real zebras. I believed it until I was a teenager.”
– Karen L.

“When I was 12, my mom had my younger sister. With such an age gap, I had a good time teaching her naughty things because, at the time, I was very resentful of having a new sibling. When she was about 3, I remember going into her room and saying ‘okay, it’s time that I taught you some curse words.’ And she was so good at them. She always used them in the right context and had perfect timing. My parents were perpetually mortified by what she would say and would then insist they had no idea where she learned it. But it was me! She learned from the best!”
– Jenn M.

As more and more of my readers’ sibling stories were pouring in, I felt even more thankful for my sister, for her kind nature, and for the close bond we share. Our parents never allowed us to fight (that they could see) and always encouraged us to be one another’s closest confidant and to always cherish our relationship. I am forever grateful that I have a built-in best friend in my sister. 