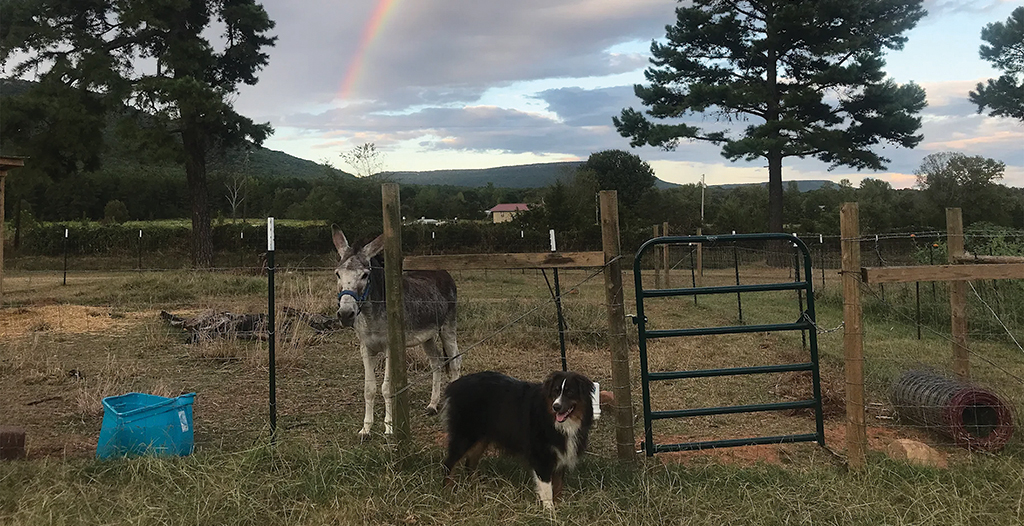 Mornings in the country are often thought of as quiet, pastoral, serene. That might be true somewhere, but where we live, every morning you’re greeted with roosters crowing, a few too many cars driving way too fast down our dirt road, and the beautiful, intense, slightly out of tune trumpet-like sounds of our donkey braying loudly. She wants me to come give her a carrot, an apple, or the occasional marshmallow. I’ve been told she can be heard from our neighbors house half a mile or more from ours, her bellows wafting across the pastures and the dewy morning grass. I can see how the frequent siren call would be annoying. But to me it’s one of the most beautiful — albeit awkward — sounds of Harkey’s Valley.

Our donkey’s name is Jenna, and she only came to live with us recently. About three years ago when we were getting ready to move back to Dardanelle from Little Rock, I have a clear memory of sitting down at my computer and typing “donkeys for adoption” in the search bar. I was supposed to be packing, but I couldn’t get my mind off of our potential ability to finally live out a long-held dream: having a pet donkey. There are many reasons we wanted to move to the country — ability to grow more food, live closer to the land, be closer to Dad — but I can sincerely say that owning a donkey was surprisingly high on that list. We all have our priorities.

As much as we wanted to get a donkey quickly, it was only recently that we finally met that goal. We’re fairly financially responsible people, always quick to save and slow to spend. However, when we received our stimulus money all we could see was visions of barbed wire and donkey housing in our heads. So the first phone call I made was to our neighbor, whose sister raised donkeys. Turns out, we didn’t end up buying a donkey but rather adopting an older one from those same neighbors who no longer were able to care for her. I remember clearly the day they walked her over through their pasture and across the dirt road intersection. She moved slowly, big ears pointed upward and on alert. We had always planned to name our donkey “Hotey,” as in “Donkey Hotey” (say it out loud), but this one came pre-named “Jenna.” We decided to let her stick with this familiar moniker. After all, there is always the option to get more donkeys, right?

Why does a person keep a donkey? Well, for starters, they make great protection animals. They will fight a coyote and don’t like strange dogs around their property. Jenna was totally gonna kick to kill our dogs until she got used to them. Now they’re all friends, but they most certainly had to earn that trust. They also make great lawnmowers. We often take Jenna out on her lead and let her mow down the grass all around our house. But for me, Jenna is a connection to someone I never met.

My grandfather, John L. Martin, once lived on this land, and was known for his work with mules and horses. As a kid, my dad and I rode our own horses up and down this dirt road, stories I’ll have to share sometime in the future. We never had a donkey, but what is a mule if not a cross between the two? Neither majestic like a horse nor utilitarian like a mule, a donkey is loud and determined and scrappy. Their ears are a thing of wonder. And there is something about looking out the window every morning and seeing Jenna that sets my mind at peace. Hearing her bray for me in the mornings is like music — loud, intrusive, punk bucolic music.

When I told my Dad that Jenna had gotten to where she brays for me every morning he replied: “You’ve done got her spoilt.” He’s right. She knows that if she calls for me, I’ll come out. But I think I’m the one who hit the jackpot. Fewer things make me happier than knowing this large creature knows how to call for me, her loud sounds echoing off of Spring Mountain and through the valleys and pastures, and knows that I’ll come to her side. She knows that I’ll sing her a song or two, brush her hair and take her for a walk, and that my pockets overflow with carrots and apples.