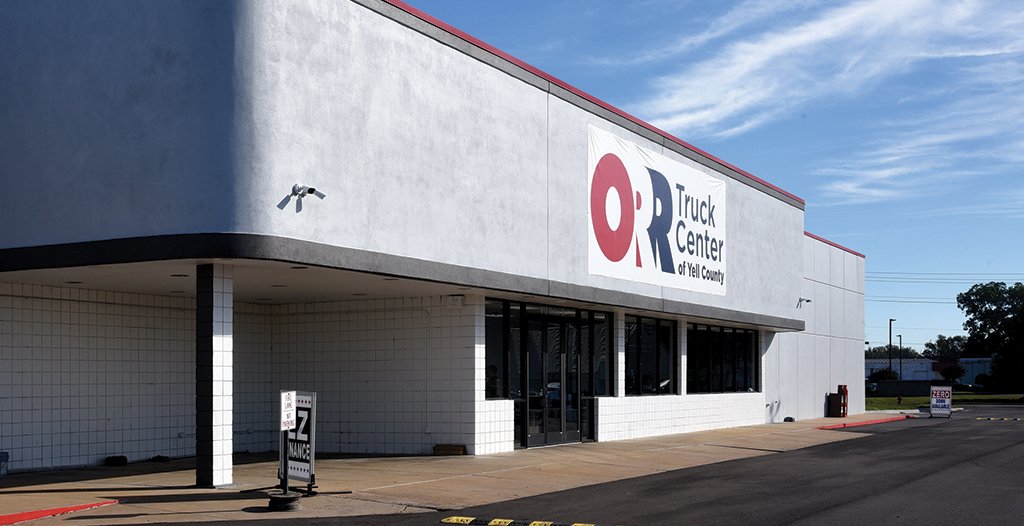 “It was a long process, but it was a no-brainer that Yell County was the choice,” said James Parker, manager of Orr Truck Center of Yell County. “We looked at different towns and talked to councils and chambers and the people in the towns. David Rogers, co-owner and general manager of Orr, really put a lot into figuring out where. It took about a year. After he sat with the mayor and people from Yell County, it was just a matter of finding a spot, a place that was centrally located.”

On September 1, 2021 — in the fully-renovated, former grocery store at 612 Union Street in Dardanelle — Orr Truck Center of Yell County opened its doors. Carrying new and used vehicles, plans are underway to add a full-service center and parts department.

While the building is ready, the only delay is in getting necessary equipment. “It’s a longer process than we had hoped,” Parker said, “but the service center will open as soon as we can get parts. Like everything else right now, there’s a parts shortage.

While the only new vehicles carried are Ram trucks, Orr Truck Center will carry any brand of used with makes including Mercedes and BMW currently on the lot. Parker added that they will service any make and model. “We have vehicles from $2,500 and up right now. We have something for everyone.”

Parker said plans were to keep up to a hundred vehicles on the lot. There are currently approximately 60. He added that combined, Orr Auto Mall in Russellville and Orr Truck Center have more used car inventory than the rest of the River Valley. Parker also said that he expects new car inventory to rebound by mid-2022.

Parker said that what Orr is most proud of is that everything sold comes with a free lifetime powertrain warranty. “That’s 100 percent parts and labor, no deductible, no max term, at no cost.”

Orr Truck Center presently has nine full-time employees with plans to eventually employee around 30 when the service and parts departments are complete. The current employees all have strong ties to Yell County, and Parker said they are trying to hire from Yell County exclusively.

Parker said his family has had Yell County ties since his grandparents settled in Danville. Now his children live in Dardanelle and his grandchildren attend school in Dardanelle. Parker started with Valley Motors and stayed when it became Orr Auto Mall for a total of 20 years. He said of Orr Truck Center of Yell County, “We plan to grow with the community and be an active part of everything we can, especially with youth programs.”

Sales professional Scott Ross is from Dover. He said he enjoys meeting new people and has been with Orr since June, 2021.

Sales professional Roberto Guevara said he and his family moved to Dardanelle when he was in the sixth grade. He graduated from Dardanelle in 2016, then went on to earn a degree in collision repair. “I’ve always been involved with cars. I worked at O’Reilly’s and Auto Zone during college, then became employed by Orr in July of 2019.”

Finance manager Scotty Stone was the sales manager at Hyundai since 2012, before moving to the Orr Truck Center. He grew up in Yell County and likely has the longest family history there of the Orr employees, dating back to at least 1820. “It’s my home,” Stone said. “I live one mile from here in the house my grandparents built, and I’ll live here forever. I love to travel but my roots are here. I don’t want to be the one in the family to change that now, after 200 years.”

Sales professional Walter Gray grew up in Van Buren but relocated to attend Arkansas Tech and earned a degree in social media marketing. Gray took his social media knowledge to Orr and became the Ride Retailer. He is on Facebook with 4,000 followers and having just begun Tic Tok has 200 followers. Gray lives in Russellville but plans to relocate to Yell County soon.