The Downtown Russellville Fire of 1906 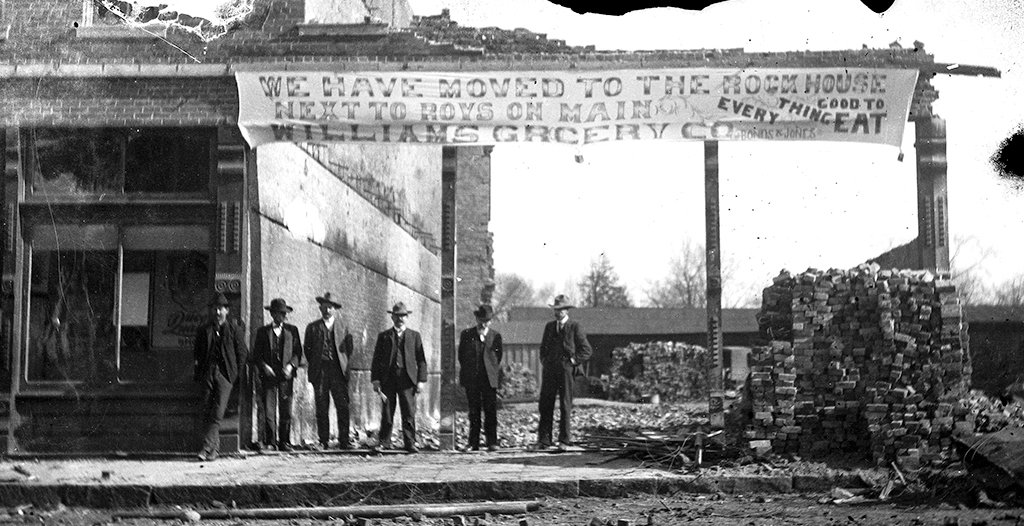 The most serious threat to the survival of a community in the early 1900s was fire. Wooden frame buildings (some with sawdust floors) provided fuel that allowed fire to quickly spread, burning houses and businesses and resulting in the destruction of small towns throughout the country. Most communities did not have a fire department, and even for those that did the firefighters were volunteers with equipment consisting of a horse-drawn wagon and water pumped from wells. The normal method to control the spread of a fire was a bucket brigade — men and women lined up, handing buckets of water from one to the next, until the last person in line threw the water onto the flames. Russellville had voted to create a volunteer fire department in 1905. Under the supervision of Dr. R. L. Smith, former chief of staff at St. Mary’s Hospital, the 30-member department ordered $850 of equipment including a horse-drawn hook and ladder truck, 400 feet of hose, two dozen rubber buckets (rubber, so that the buckets could be thrown from a rooftop and not suffer damage), and assorted other pieces of equipment.

Just after 10 p.m. that night, the people of downtown Russellville were awakened by the sound of an alarm and shouts of “fire.” Residents rushed outside to find flames lighting up the clear, cool sky over the downtown business district.

The fire had started in Chronister Brothers Grocery. Those arriving first thought they might be able to contain the blaze as the night air was still and the fire moved slowly through the store. 

But within minutes the wind had increased, fanning the flames and dramatically increasing the fire’s intensity. The dark blue sky above the city became crimson red as burning debris blew from one wooden structure to another. Within an hour of its start, the fire had spread south onto the west side of Jefferson Street toward Main Street then north to Mourning & Hoods Drug Store and east toward the Bank of Russellville.

Residents formed a water brigade but the two wells near downtown could not produce enough water to match the speed of the moving fire. Some residents rushed home and returned with wet blankets, throwing them up against the walls of buildings in an attempt to slow the spread of flames to nearby wooden structures. The fire burned the central offices of the Russellville Telephone Company and those of the Southwestern Telephone Company leaving only the telegraph line — a much slower and less effective means of reaching nearby communities.

For most of the evening, townspeople fought a losing battle as the wooden commercial buildings and their contents fed the fire. The wet blankets did reduce the number of structures destroyed, including the Courier-Democrat newspaper offices. Finally, the winds began to decrease and just three hours after it began the fire burned itself out, stopping near the west wall of Gardner Brothers Furniture Store.

In those three hours the fire destroyed half of downtown Russellville. Three entire blocks were a total loss. Twenty-two buildings and 23 businesses all but disappeared that evening. The damages of the fire were estimated at $250,000 (an estimated $6 million today) with only about 40 percent of that figure covered by insurance. One witness said it was the most rapid fire he had ever seen, given the destruction caused in such a short period of time. **

The next day, townspeople fully realized the extent of damage to the business district. Sightseers came from miles around and discovered that the heart of Russellville lay in ruin with buildings and rubble still smoldering. Merchandise — from shirts and shoes to piles of unrecognizable debris — lay scattered. The businesses destroyed by the fire included a grocery store, butcher shop, two dry-good stores, a jewelry store, a tailor shop, two second-hand stores, a furniture store, a funeral parlor, a saddlery, two barber shops, two banks, a gentlemen’s store, both of the city’s telephone operations, a general store, a hardware business, and clothing stores. Among those businesses was Faulkner and Schaeffer Jewelry and Cream Parlor, which had, to the delight of children, just installed a soda fountain. Fortunately, they held a $3,000 insurance policy that helped cover the loss.

Not as fortunate was Jacobson & Sons Mercantile, which lost an estimated $18,000 in stock and held no insurance. But these figures did not include the loss of income for owners and their employees as the Courier Democrat noted in a special edition published the day after the fire, “mingled with the throng on the streets is seen the property holder who has lost the savings of a lifetime; the businessman who has labored to build up a trade that would enable him to support his family and last night stood by helpless and saw his stock of goods consumed by the flames, and in many instances is this morning practically as a beggar on the streets, the clerk or salesman who yesterday held a position with a lucrative salary and is today without work.”

Townspeople quickly replaced their shock with a determination to overcome the destruction. In one example of this resilience, the Bank of Russellville reopened less than eight hours from the time the fire started. The bank’s vault was the only structure not damaged by the flames (made of steel, the three-ton structure took three days to cool before the combination lock could be touched). Employees moved the vault to the old post office building and the bank opened for business at 11 a.m. the next day. That same day, Tuesday afternoon, less than 24 hours after the alarm sounded, the city’s leaders gathered and called for a meeting to plan for the immediate rebuilding of the downtown area. At the meeting, public officials and merchants pledged to rebuild the business district and restore downtown Russellville as the center of commerce for the surrounding area. One businessman who attended the meeting said, “every Russellvillian will swell with pride when he learns that we already have assurance that every building in the burnt district will be replaced by larger and handsomer structures as soon as the work can possibly be done.”

County Clerk A. H. Shinn sent a note by telegraph (the phones still not operating) to Little Rock’s Arkansas Democrat stating that the city would rebuild with no outside assistance. The paper’s headline for the story read, “Plucky Businessmen Begin Plan for New Stores.”

The town kept its word. That summer, six months after the fire, 20 of the 23 destroyed businesses opened in new buildings — constructed of brick. To announce the reopening, representatives from Russellville accompanied by a brass band traveled throughout the county. Merchants sent flyers to nearby towns and Little Rock reminding readers that the city was an important trading post. The rebuilt businesses celebrated with a nine-day inaugural sale. Beginning July 15, Rev. E.T. Edwards arranged a weeklong chautauqua that provided three events daily and drew large crowds and customers to Russellville. The following month the state’s Democratic Party chose the city to begin its campaign season. This event attracted 6,000 guests including ex-governor and current U.S. Senator Jeff Davis, a former Russellville resident.

The rebuilding continued in 1907 with a new high school. The city laid paved sidewalks in the downtown area in 1908 and that year the state legislature chose Russellville as a location for one of four new agricultural colleges (now Arkansas Tech University) with classes beginning in 1910. This was also the year when the Russellville Electric Theater opened. The year 1912 saw the completion of the two-story V-Building which housed a restaurant, clothing store, and pool hall. That same year the city created the town’s first paid fire department consisting of 12 men. In 1915 the Wilson Community Theater opened its doors and the first gasoline firetruck arrived (an American La France 10-type automobile truck and pump like troops used in World War I). In 1916 the St. Louis Iron Mountain and Southern Railroad build their depot two blocks from Main Street.

One decade after a fire that might have led to the demise of the town, Russellville used the tragedy as a catalyst to rebuild, transforming the county seat from a small town of under 2,000 into a modern city with a population of over 4,000.

* The downtown historical marker states that the fire started in the afternoon of January 17. However, contemporary newspaper accounts and scholarly histories of the event all agree on the date January 15. Given how quickly the flames spread and the destructive nature of the fire, several customers and employees would have been injured if the fire had begun in the afternoon. The fact that neither newspapers nor oral histories of the event mentioned any injuries to any persons supports the consensus that the fire took place late in the evening of the 15th when the downtown district was empty of people.

** Stores damaged with estimated loss and in parenthesis their insurance coverage: