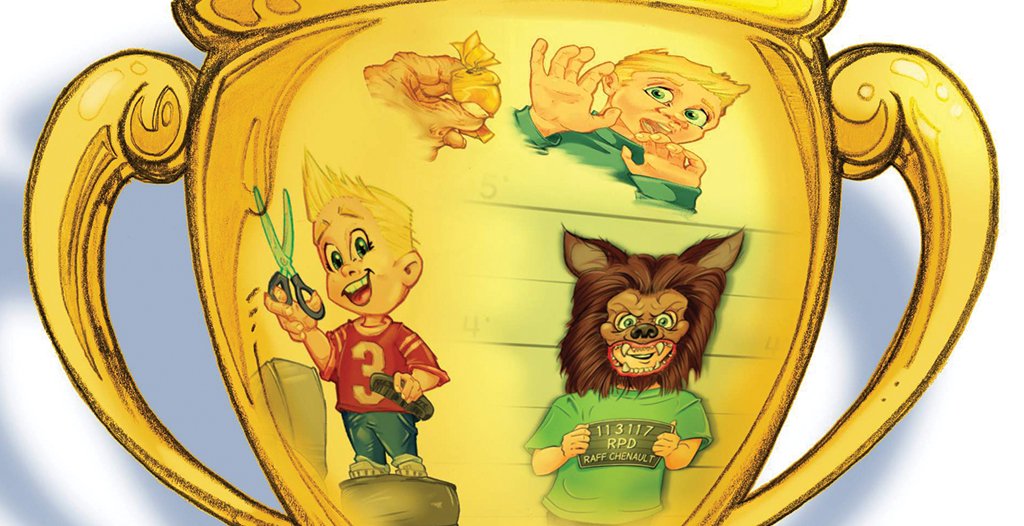 A few weeks ago, I babysat for my dear friend Christine. Her daughter Opal had been quite a handful. I wasn’t going to tattle to Christine about all of Opal’s antics, but of course, Raff did. Christine asked me out to coffee a few days later and again apologized for Opal’s behavior. I told her there was no need to, that I was used to a “highly spirited” child. She then lamented about all the other ornery things Opal had been up to.

I gently reminded her that Opal was only two, and that the terrible two’s were definitely real, and that I had raised my own ornery child that Opal couldn’t hold a candle to. I wasn’t sure this made her feel any better, though.

“Christine, I know you think Opal is a little difficult—“

“She stole a blind man’s walking stick and ran off with it!” she interjected.

“I know, but do you recall all the sorts of things Raff has done and all the ways I’ve been embarrassed?” I asked.

“I remember you telling me a few things…” she said softly.

“Well let me jog your memory!” I said with a maniacal laugh.

“Did I ever tell you about the time Raff got mad at me for not letting him use the microwave by himself when he was five so he cooked a hot dog in the dryer?” I said.

“Yep! Or the time he hid from his dad and me when we went to Lowe’s to buy a new washer and dryer. He hid in a dryer and fell asleep. We thought someone had kidnapped him. Or the time he accidentally locked himself in a dog kennel at Walmart and I thought someone had taken him and they had to call a Code Adam, and the only way I was able to find him was to review security footage?”

“Oh yes! Or the time he pulled the fire alarm at the school because he wanted to go home early? Or the time his kindergarten teacher had to call me and tell me she couldn’t find him, and by the time I got to the school he had been found on the playground. He had snuck outside after music class and just had no idea why he was in trouble.”

“Oh yeah. Or the time he hopped on a woman’s electric cart at Walmart while she stood up briefly to reach something and backed into a whole end-cap of gallon jars of pickles? Or the time at Walmart he asked a woman why she had a butt in the front as well? And then five minutes later, at check out, he was being way too curious about why a breast-feeding mother had put her baby ‘up her shirt.’ And when I tried to discreetly explain that was how he was fed as well, he loudly exclaimed ‘you tried to squish me up your shirt like that lady?!’”

“How did you ever take him anywhere?” Christine asked, visibly admonished.

“I tried not to!” I exclaimed. “I tried to get family to watch him if I could, but I can assure you, every time I had to take him anywhere there was an incident. Even in the car he would do crazy things. He had a wolf mask and was scaring other drivers with from the back seat. That got me pulled over!”

“Pulled over?” Christine asked, her eyes very round.”

“Yes! And although the cop just gave us a warning, Raff informed him that I should be taken to jail because I’ve said bad words before. I thought I was going to die of embarrassment!”

“Or the time he wanted to lead prayer at a church potluck and he went through the lineup and blessed every member, thankfully it was a small church, even ‘the old man at the back who always smells like farts.’ I just wanted to crawl under the table. Or the time I took him to volunteer with me at a food bank on Thanksgiving, and he insisted that he could handle the green beans. Once the recipients of the food boxes came in, I got really busy and when I looked over to check on Raff I was mortified to see that he was placing the cans of green beans in their boxes with one hand and holding his nose with his other one.”

“Yeeeessss…” I said. “Or just the day-to day-things he would pull at the house, like peeing in the cardboard box that his new TV came in because he ‘wanted to know what it felt like to be homeless.’ I’m telling you, Opal has nothing on Raff. And remember, Raff didn’t even have the excuse of being a toddler when he did most of these things.

Christine shuddered. “I don’t know how you’ve made it through all of that.”

“I’m not sure how I even have a shred of my sanity left.” I said, taking a sip of my coffee. “I can look back on all of those moments and laugh now, just as you will do in future. It seems overwhelming, but when she gets to be as old as Raff is now you’ll miss those years no matter how overwhelming they may seem now. I promise.” I assured her.

Her facial expression told me I hadn’t convinced her.

“And the next time Opal does something like snatch a blind man’s walking stick, just call me and I’ll be happy to babysit again to give you a break. And I’ll tell you a thousand more stories like the ones I just told you to make you feel better.”

I laughed, a little on the maniacal side. “There’s so many more, and even more that I’m sure would traumatize any mother with embarrassment just by listening to them. Trust me…” 