The Train Town that Marion Built 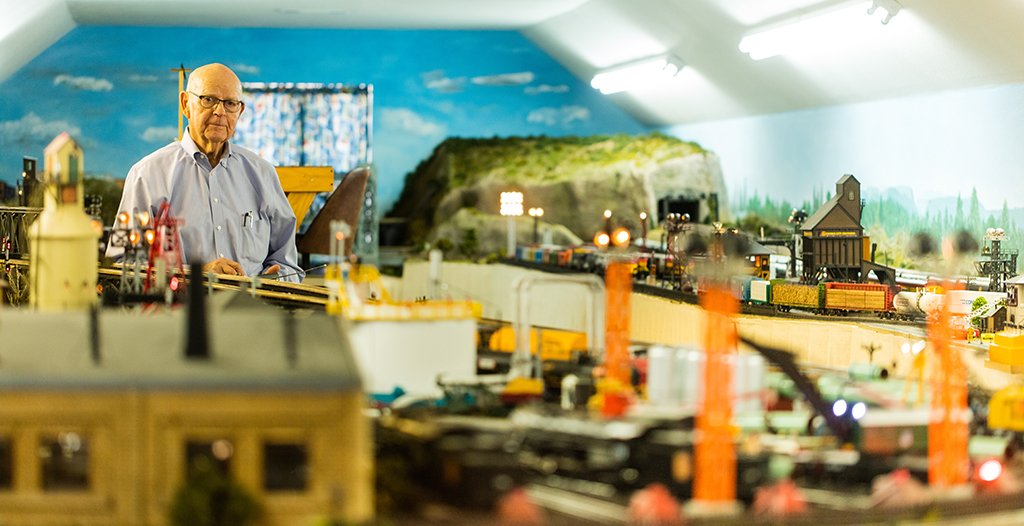 Marion Helton is a self-proclaimed “train nut.” From his first train ride on the Kansas City Southern line when he was five years old and his first Lionel train set at age 12, his love of trains and his train-set collection grew through the years.

Marion has amassed 50 train sets, all of which either ride the two main lines on his model railway or are displayed nearby. He and his wife Joyce moved to Dover in 1993, into a home she designed with his trains in mind. The train room is built into the house, and it took 22 years to get the layout and details as they are now. The attention to detail and making each piece to scale creates a display that is both realistic and mesmerizing.

His first Lionel train set was the product of an accident in his home on the farm in Noel, MO. Trying to make his Marx toy train smoke like a Lionel, he put some of his mother’s cotton wool in the tinder box. It caught fire, followed by the drapes. His mother put it out, but when they moved to Gravette, AR, she said, “You have to sell that bull you’re raising, and buy yourself a train. We can’t afford to burn this house down.” So he did. He pays homage to his hometown with a sign in his train town that says ‘Noel City Park.’

The “O” gauge trains run on two main lines spanning 228 feet each. He has both steam and diesel engine trains. The outside loop (mainline 1), journeys around the entire landscape, and the inside loop (mainline 2), goes through the freight yards. On the north side of the room, the landscape depicts a small southern railway town with a carnival, car wash, scrapyard, church, haunted house, memorial garden, Main Street, town park, gas station and more. To the south, there is a farm and industrial sites. It contains a coal fueling tower, pipe yard, roundhouse, meatpacking plant, maintenance department, holding yard and more.

The trains go up a two percent grade on the long run across two bridges over the Arkansas River then on toward the Ozark Mountains through a long tunnel then come out under blue skies. Every detail is constructed with precision, especially when viewed from the train’s vantage point. Marion has one train fitted with a camera that displays on a television screen.

His train models include Lionel, MoPac/ Southern Pacific, Norfolk and Western, and Kansas City Southern. He has special trains like the heavy-weights, the Union Pacific 3984 Challenger and the Big Boy steam engine 4014, the largest steam engine in the world. Both the real Union Pacific and Big Boy have come through the Russellville Depot. 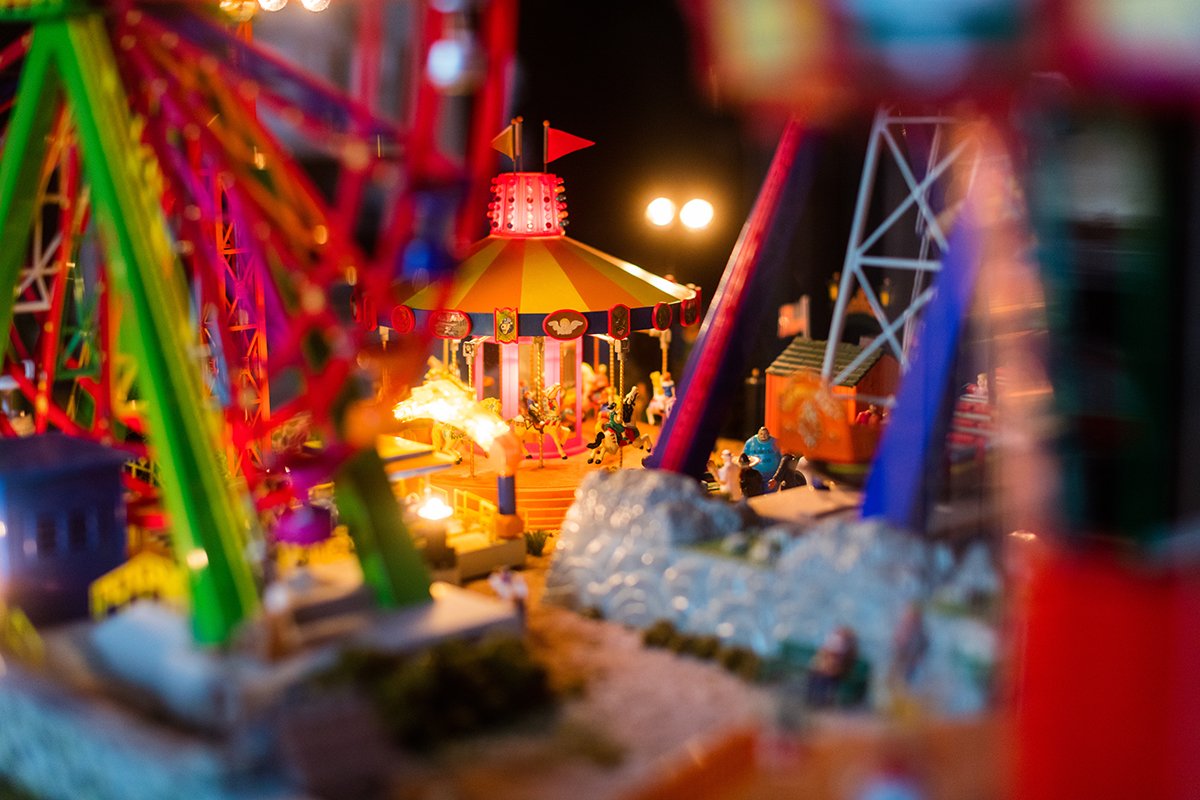 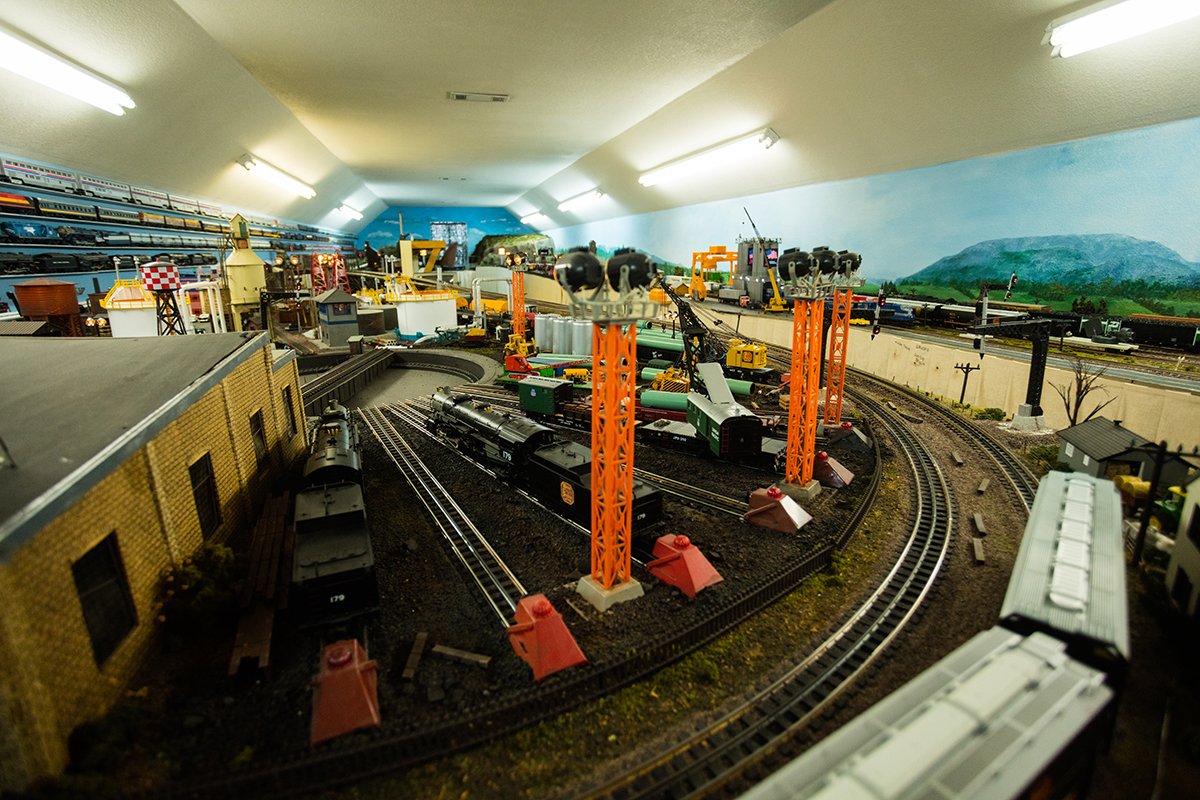 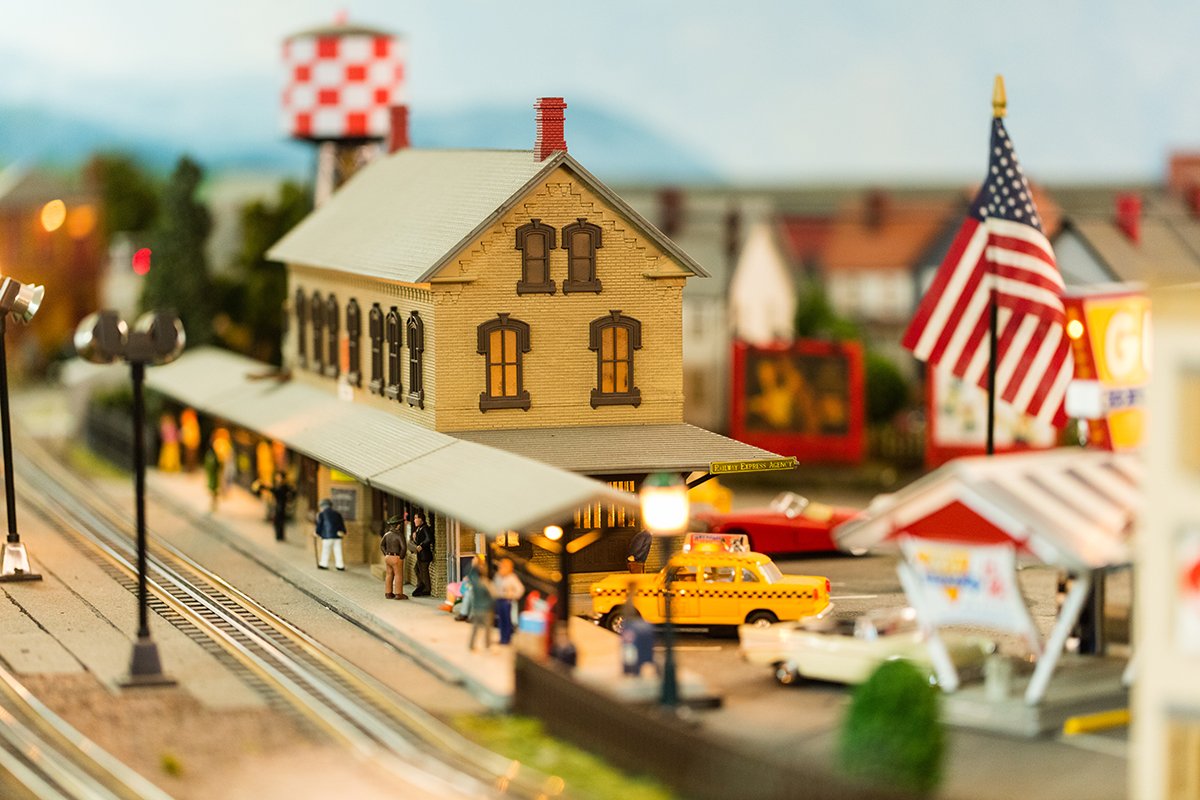 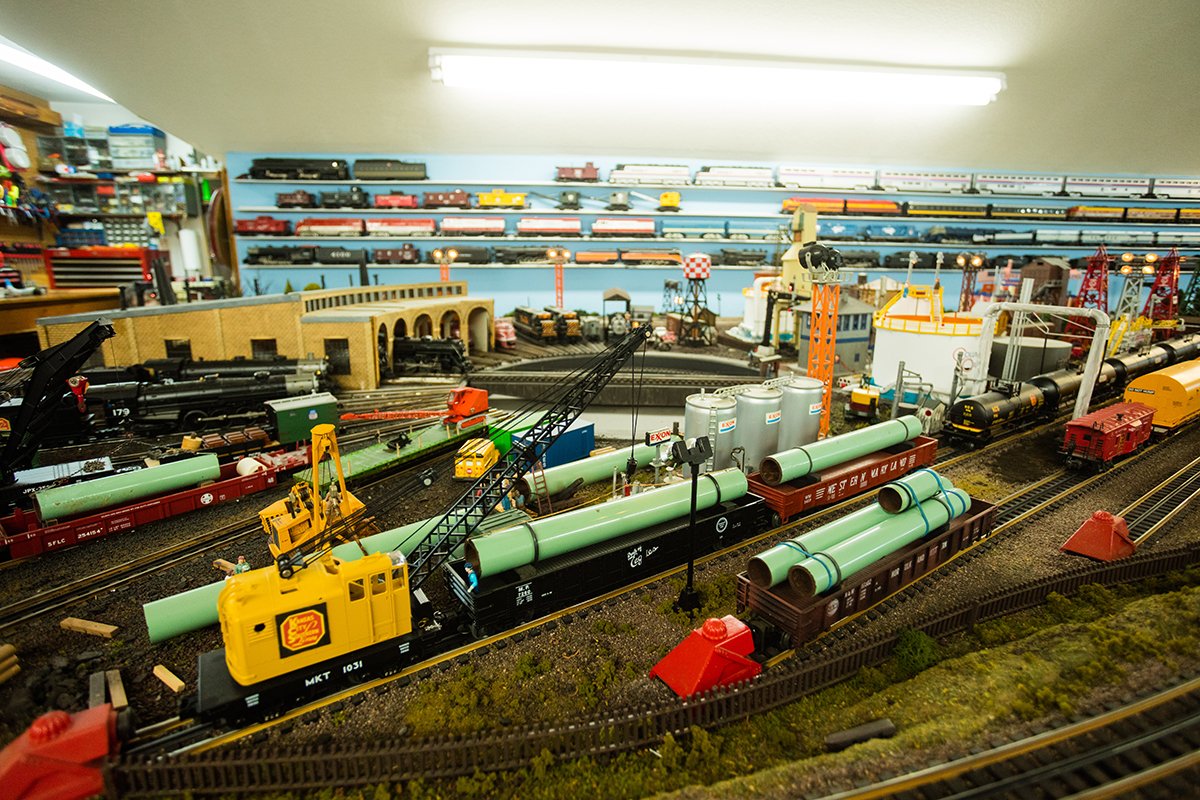 Marion built the computer control for his system, utilizing 4,000 feet of wiring. Built into the room through a hole cut in the floor, it can’t be removed. It has a Z-4000 control board and will control each train individually. His massive control board layout has a taped replica of the two main lines with a lighted display to show each train’s location. Before this system, each train had its own transformer and was manually operated. His current system uses a computer. Each train is given a number and can be sent out where you want it to go, and it does so automatically. The computer also controls the train’s speed (with a change of sound), direction, boost, the unique sound of each engine, brakes, coupling, uncoupling, bells, switching and a whistle unique to each engine. He can run up to eight trains per track but usually runs five.

There are also buttons for specific features like smoke and flames in a make-believe fire in town, or to start the conveyer at the car wash that moves the vehicle through the building.

There are lights, sound, audio, smoke, water and movement in several featured scenes. There is voice interaction between people working and between the train engineers and the tower, and conversation from various businesses. Other sights and sounds you will hear are a cow mooing, clock tower chiming, witch that cackles, fountain that spews water and a variety of birds and animals. When the lights are off, the trains, street lights and buildings light up.

The trains can signal with specific whistles when crossing roads, with two long whistles plus one short and one long, or if multiple crossings, the engineer can prolong the last whistle until all roads are passed. If the train backs up, it blows three short whistles.

“I started on the train room in 1993. It took me a year to get the track down and another year to get the ballasts right, then another year to paint, so it took a while.” The room measures 1125 square feet and is filled with trains. The layout was quite complicated and although Marion knew about what he wanted, he just couldn’t get it done. He enlisted help from an engineering friend, Rick Tanner. Marion told him, “I want a long mainline, my city here and a railroad yard here and another one there. I want to use every inch that’s practical.” Rick designed it in two hours. Except for the material used, “it’s almost just like he had it.”

The track was laid on a plywood base then the background layering began. Screen wire, paper towels and papier-mache were used for small features. The inclines, mountains and tunnel are made of plaster, while brown gravel made from roofing chat was used on the ground. Joyce painted the rugged mountains and sky, and they both painted smaller details.

Marion wanted his landscape to be “frozen in time,” depicting the 1950s and early ‘60s. “I tried to make it as realistic as possible even down to the signs on the poles, hydrants and even the dogs and cats.” Prebuilt houses were stained. Train cars were repainted to be the correct colors. He bought his Fords and Chevys from Dick’s Five and Dime and stained the cars and got them dirty. After watching the camera train move through the landscape, he blackened the chimneys and painted the inside of the tunnel. 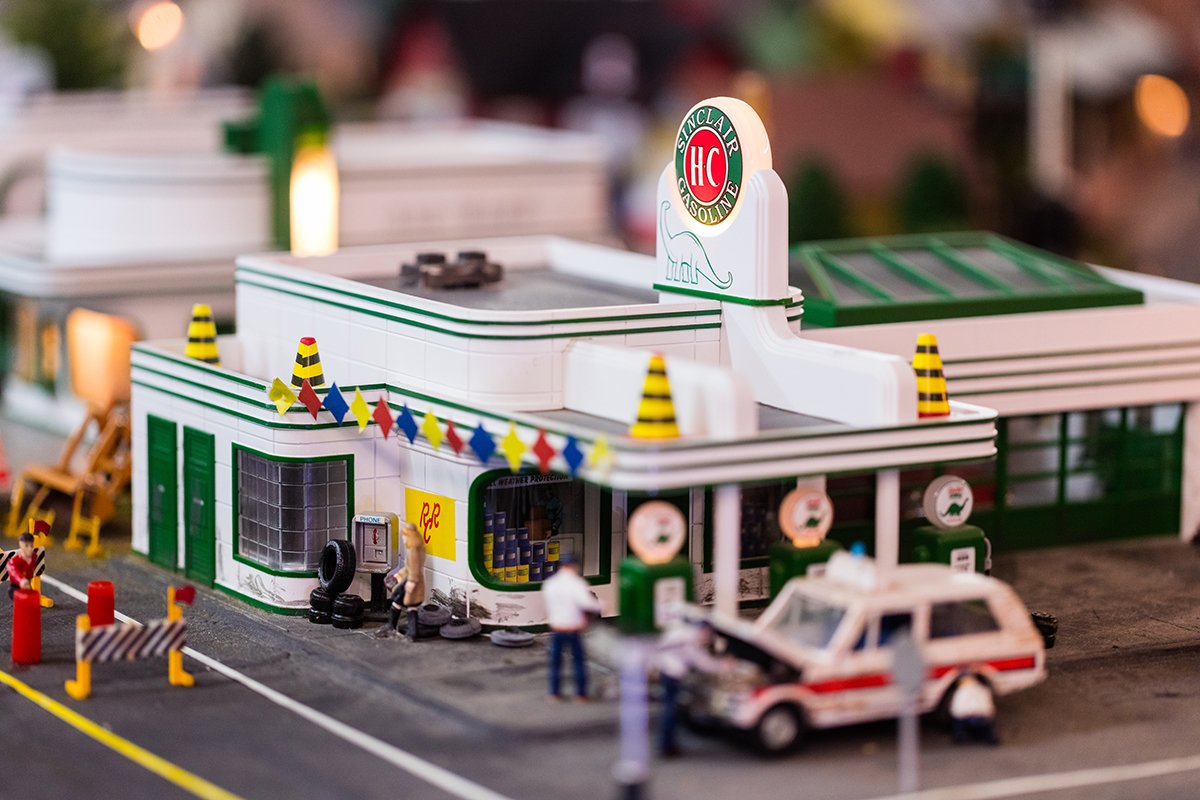 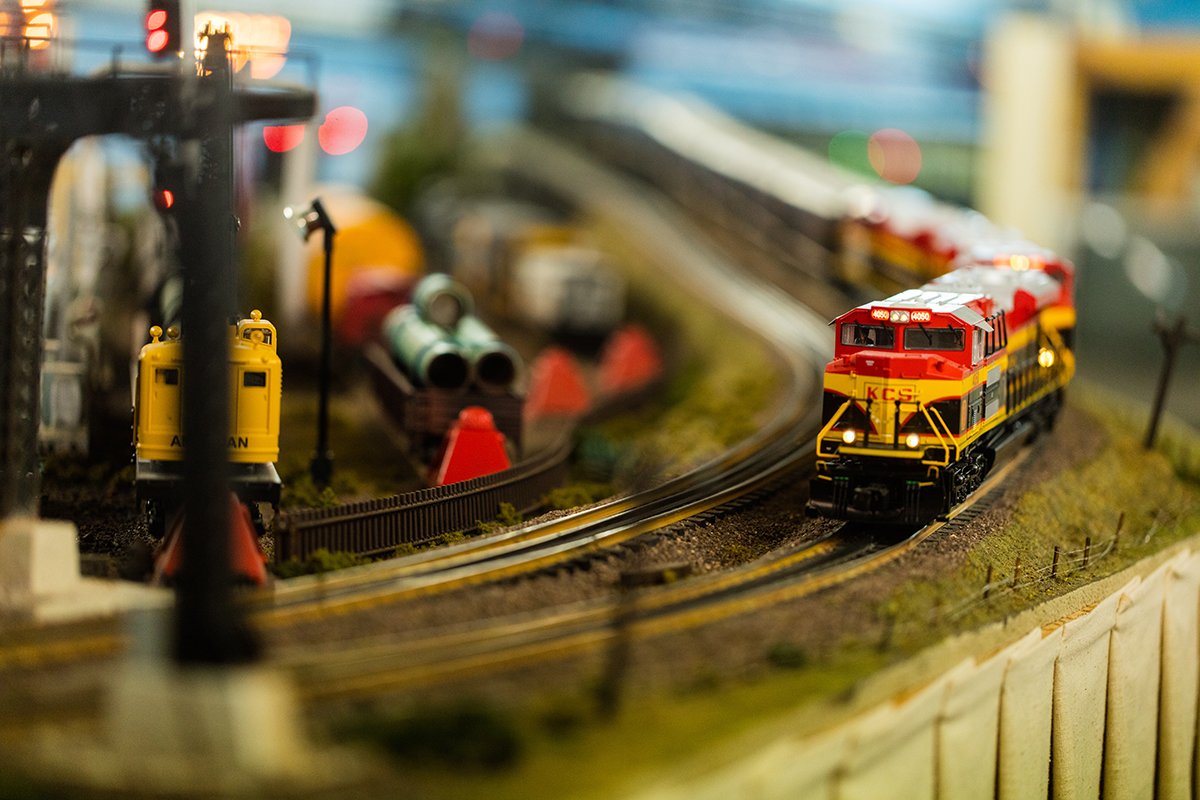 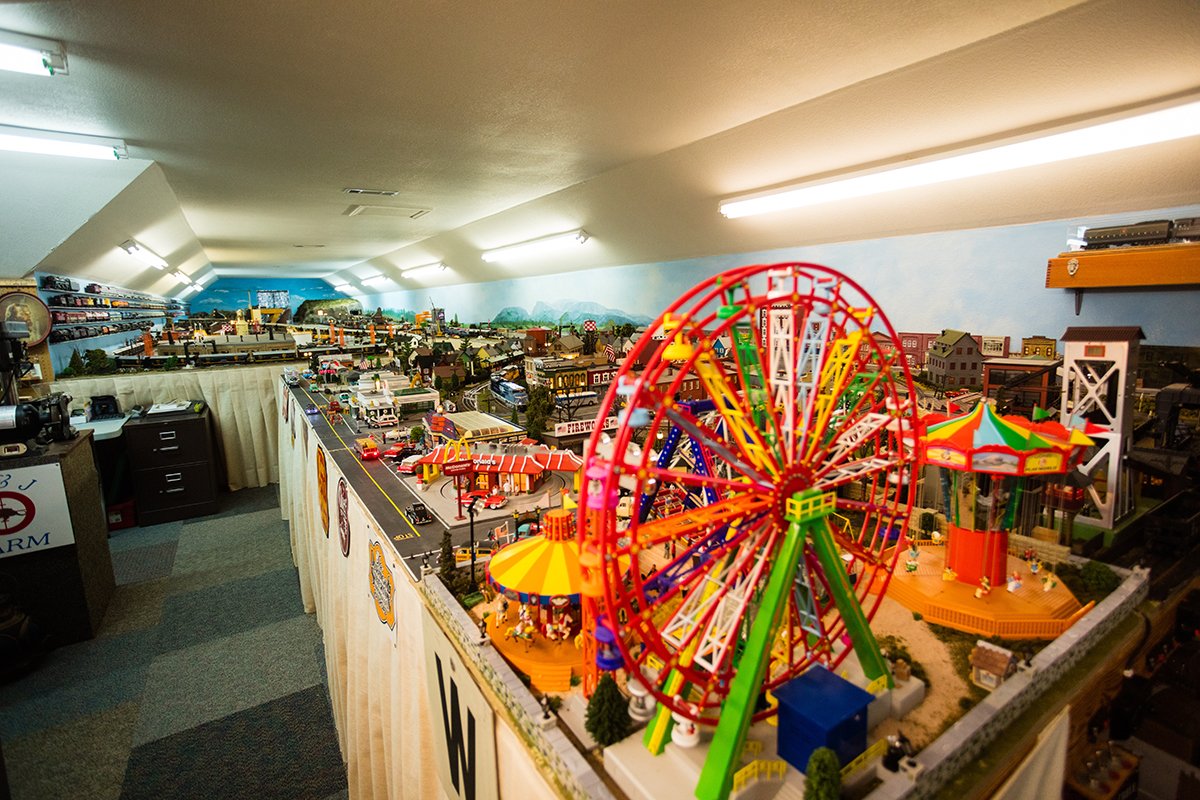 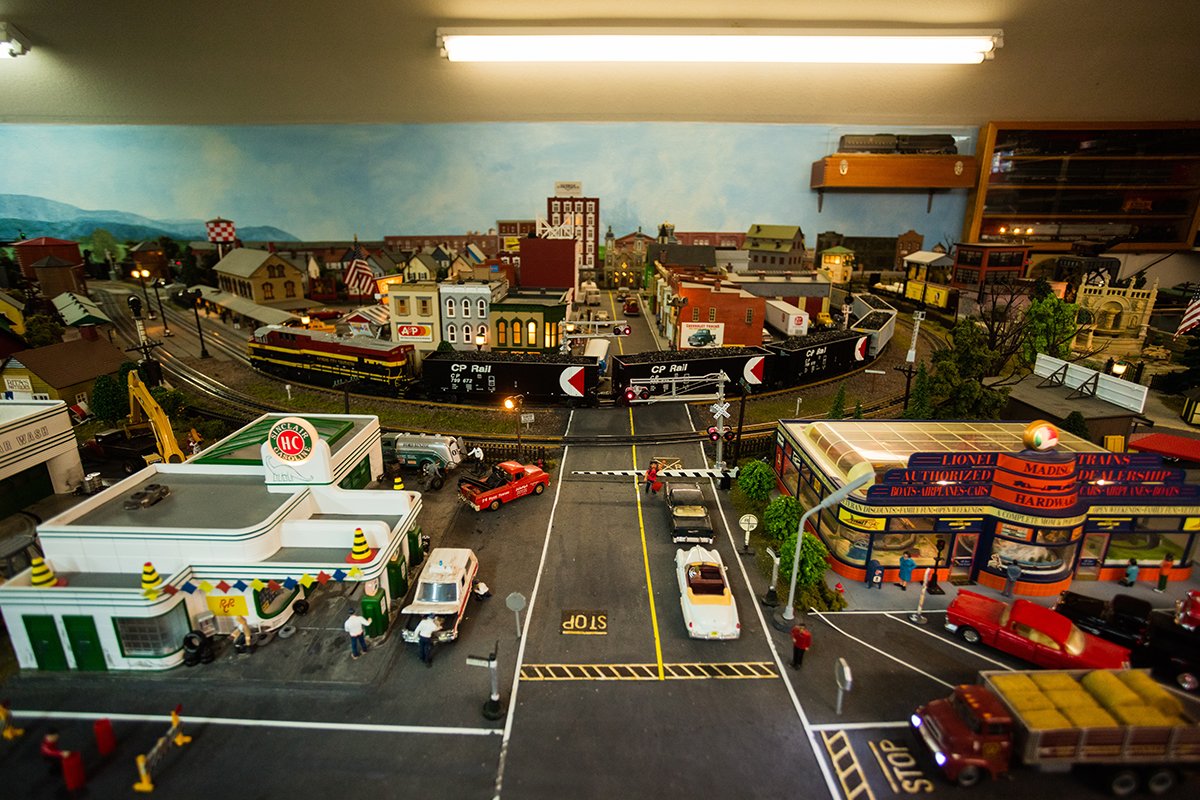 Marion has two train heroes, Mike Haverty and Ed Dickerson. Mike Haverty is an idea man. He started as a brakeman for Missouri Pacific Railroad but moved on to work for the Sante Fe Railroad for 21 years. He recently retired from Kansas City Southern. He bought several small railroads and worked with others to create a railway from Canada to Mexico City without having to unload the freight cars. He and his partner, who built the train car lift system, were responsible for creating a railway across the Panama Canal where ships could unload freight on the Pacific Ocean side, move the freight by train to the Atlantic side, and load on another ship. Previously, the ships had to wait three months to get through the canal with their freight due to the rebuilding of the Canal. Now, it took three or four hours to start reloading.

Ed Dickerson is an engineer and has worked for Union Pacific since his 30s. He was in charge of rebuilding an old steam engine, 4014, with a 4-8-8-4 wheel arrangement, before it was too far gone to restore. It now tours the country in its fully-restored state. Dickerson has to “drive the track” using a vehicle with train wheels, before each tour. He checks for clearance for this articulated engine which juts out over the track five feet. His trip is 150 miles per day as he inspects switches, bridges and sidings. The immense weight of the train, 1.2 million pounds, can crush a bridge or cause a wreck. Since the modernized engine needs fuel (converted from coal to used motor oil) he has to make sure oil will be waiting for refueling. He has to document everything, design a route and then schedule a run. Marion met Dickerson in Little Rock and has a photo of them at the entrance to the train room.

Marion prefers Lionel trains and long freight trains and is often tweaking his train layout. He enjoys showing his trains to visitors and sharing his wealth of train history knowledge with others. He and Joyce have had many visitors through the years to see the trains, many returning to share the experience with their own children. 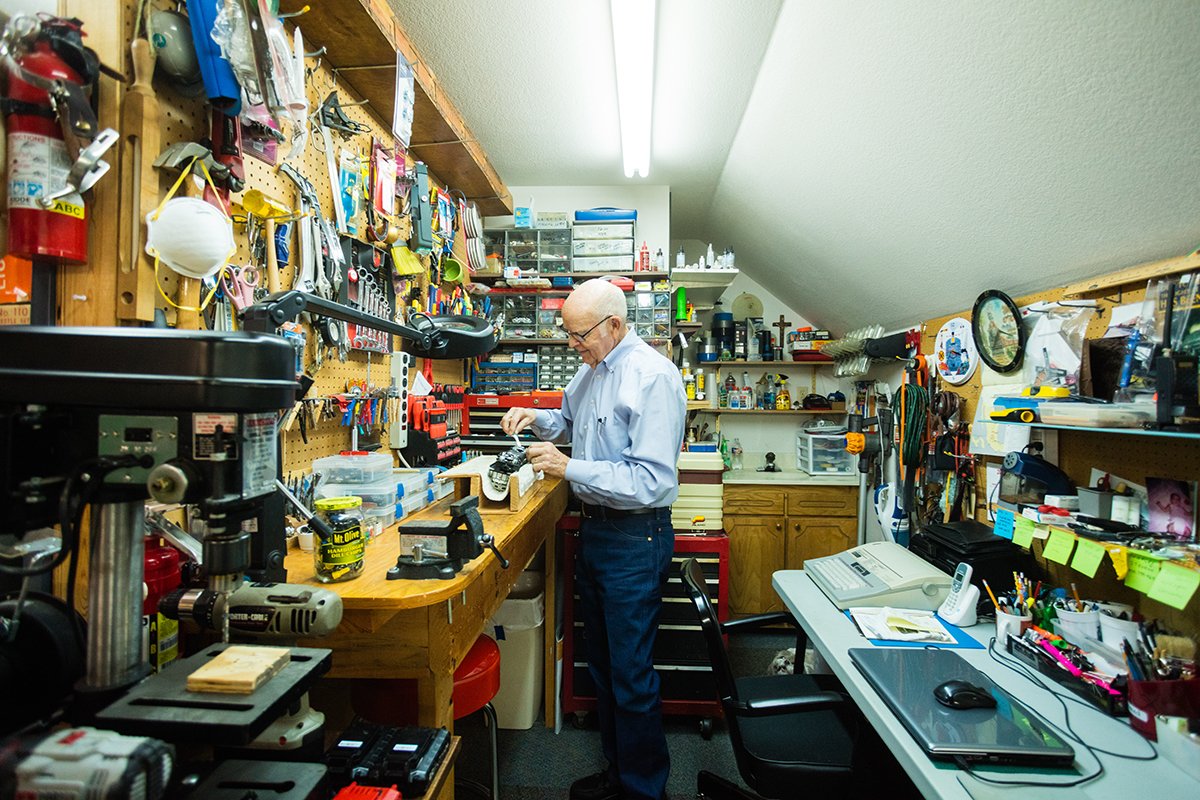 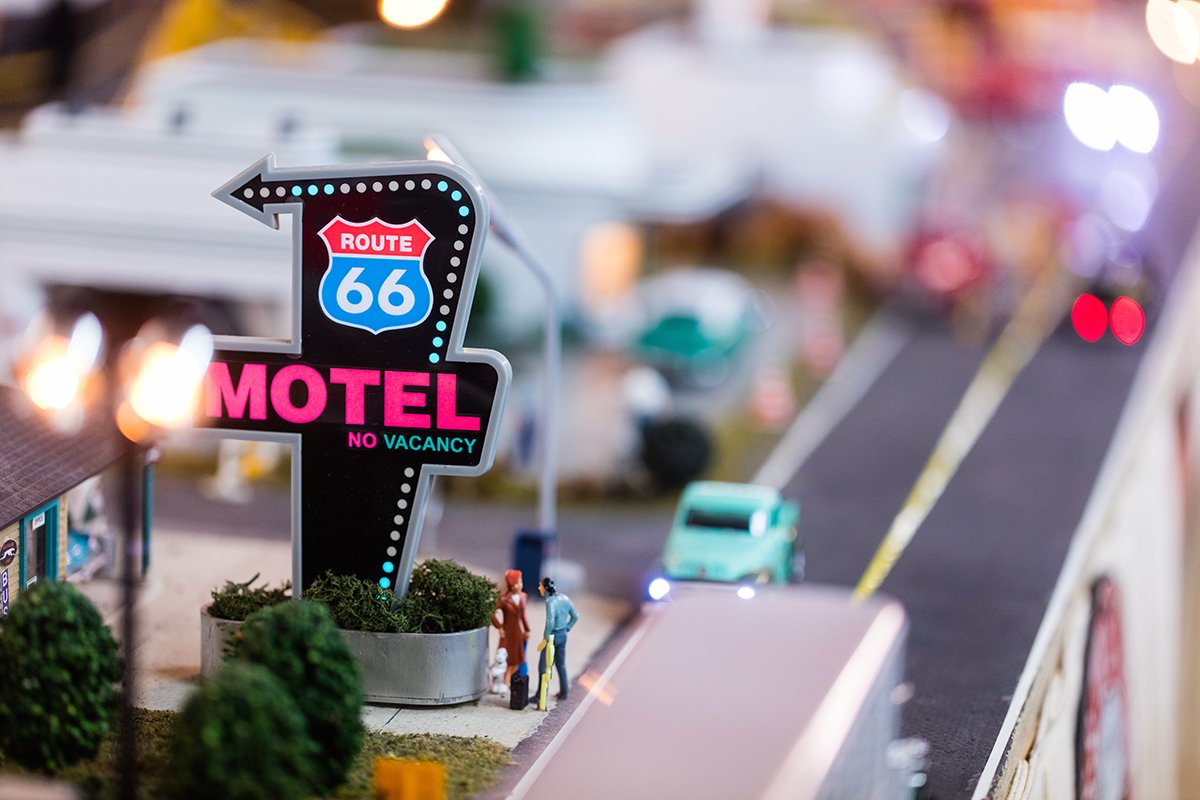 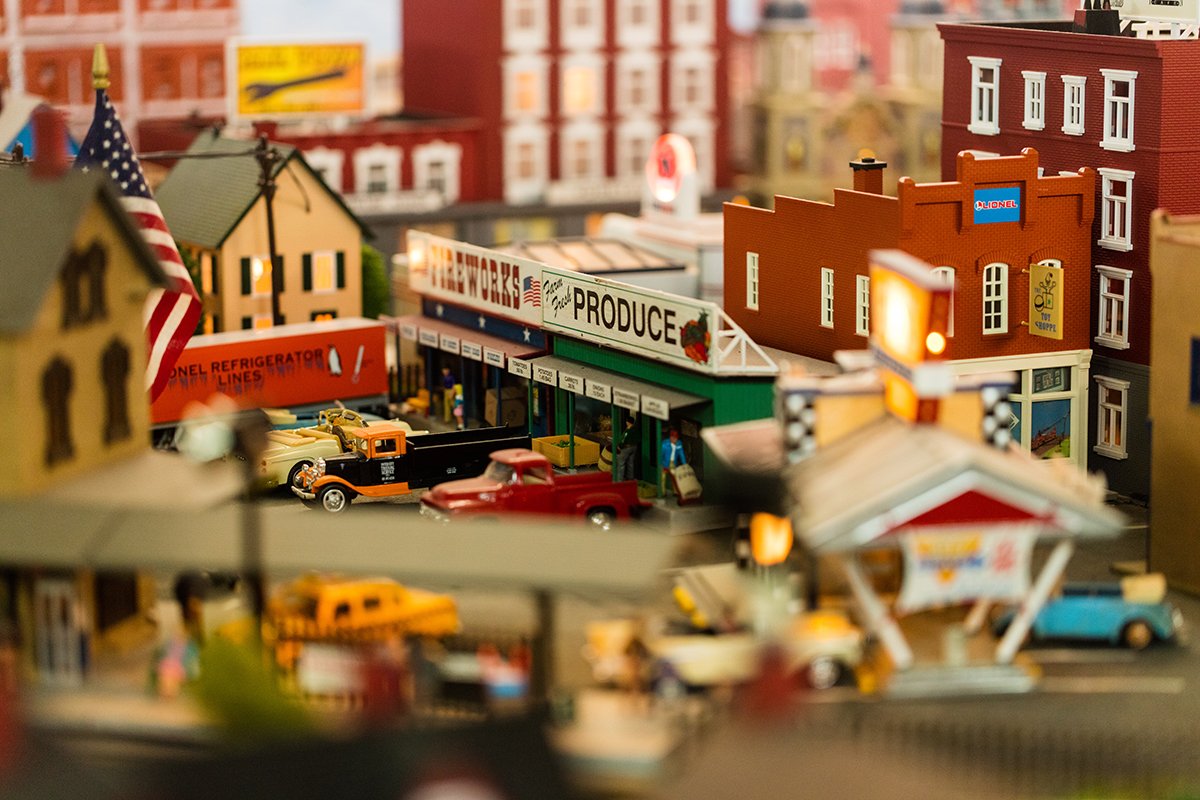 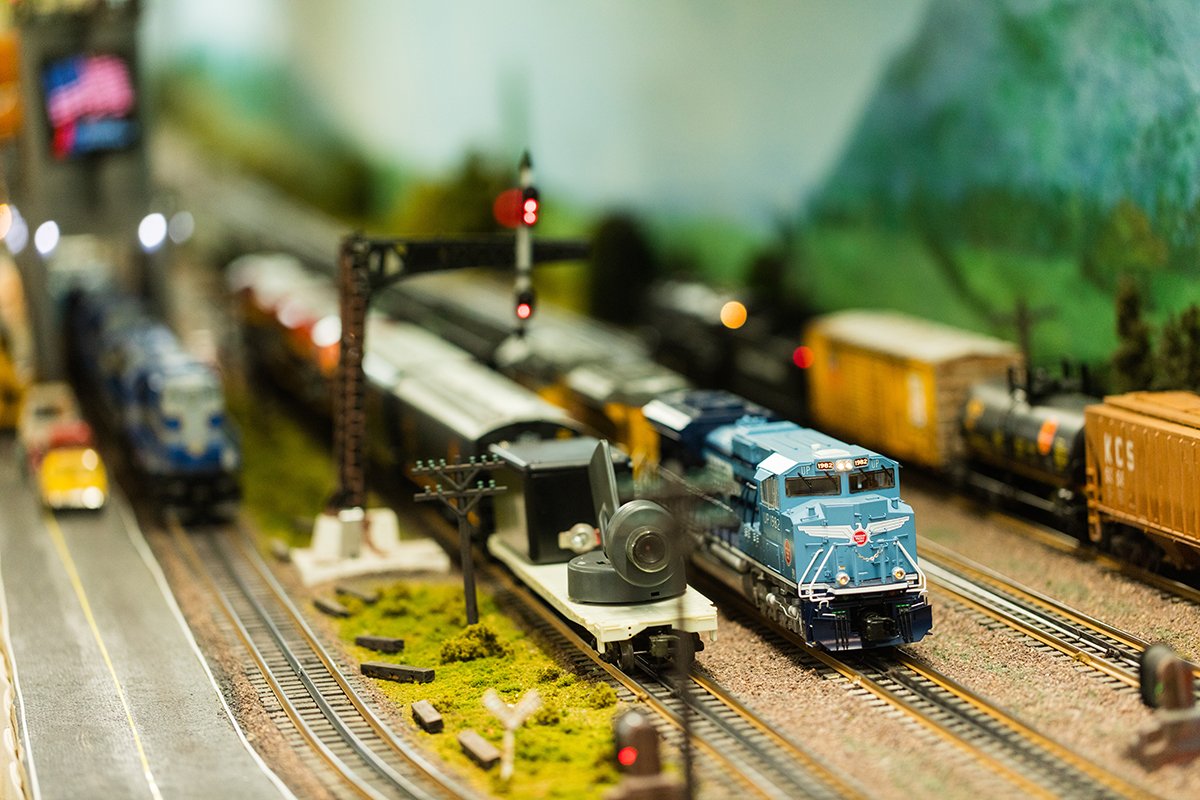