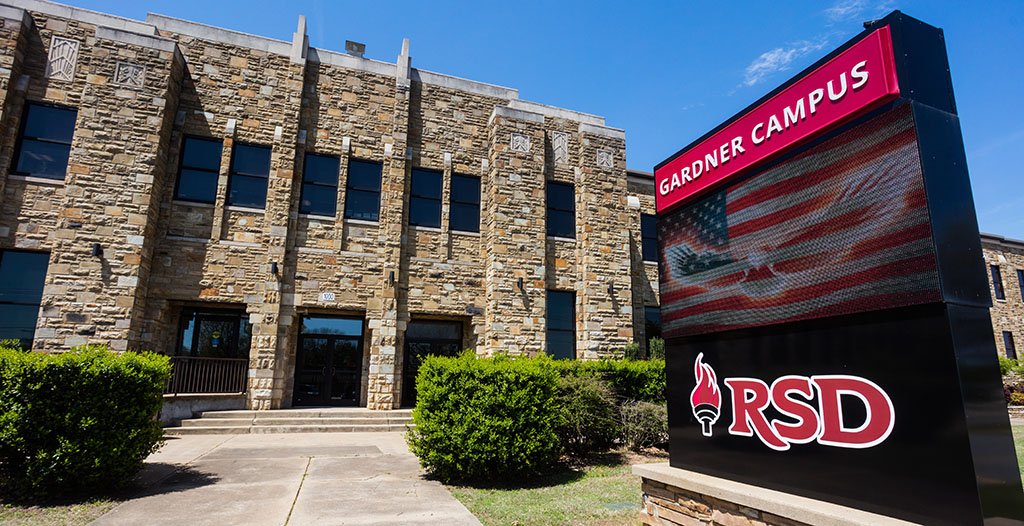 The two-story native stone structure towers over South Arkansas, standing watch as people come and go. It’s seen countless students, nervous and excited, entering the double doors in front, on the first day of the school-year, since 1943. Not only does it hold fond memories for students and faculty alike, but is a stunning landmark for anyone traveling by, or visiting for events.

Built to replace a nine-year-old school which burned in 1939, it was completed in 1943 for both junior high and high school. During the four years in which it was being constructed, students attended Sherman High School for half-days.

Until 1960, it was simply known as Russellville Junior and Senior High School, but on December 23, 1960, it was renamed in honor of Forrest Ellis Gardner, long-time principal in the school system. Gardner having seen the massive structure built, and welcoming and overseeing students and staff there for many years following, rendered the name fitting.

After graduating from the University of Arkansas, Miss Forrest Ellis moved to Russellville in 1910. After several years of teaching, she married Guy Gardner, a hardware dealer who later owned and operated Gardner Funeral Home. After a brief break from teaching for the birth of their two sons, Ellis and Charles, Mrs. Gardner returned to the education system with gusto.

Gardner was the first female principal in the Russellville School System, employed in the position from 1931 to 1961. During that time, she promoted and assisted in the publication of the first school yearbook, organized Russellville’s first classroom Teachers Association, and organized the first National Junior Honor Society (NJHS). She was named an honorary life member of Russellville PTA in 1995. For two years, she was the only female in the Arkansas Education Association, and served on the Advisory Committee of the National Education Association in 1939 and 1940. In 1950, she attended the Midcentury White House Conference on Children and Youth, during the Truman administration.

Having served as a high school only, after growth required a new junior high to be built, the natural stone structure eventually became junior high again as a new high school was built. It was rededicated in honor of Mrs. Gardner in February 1976, prior to her death in October of that year. 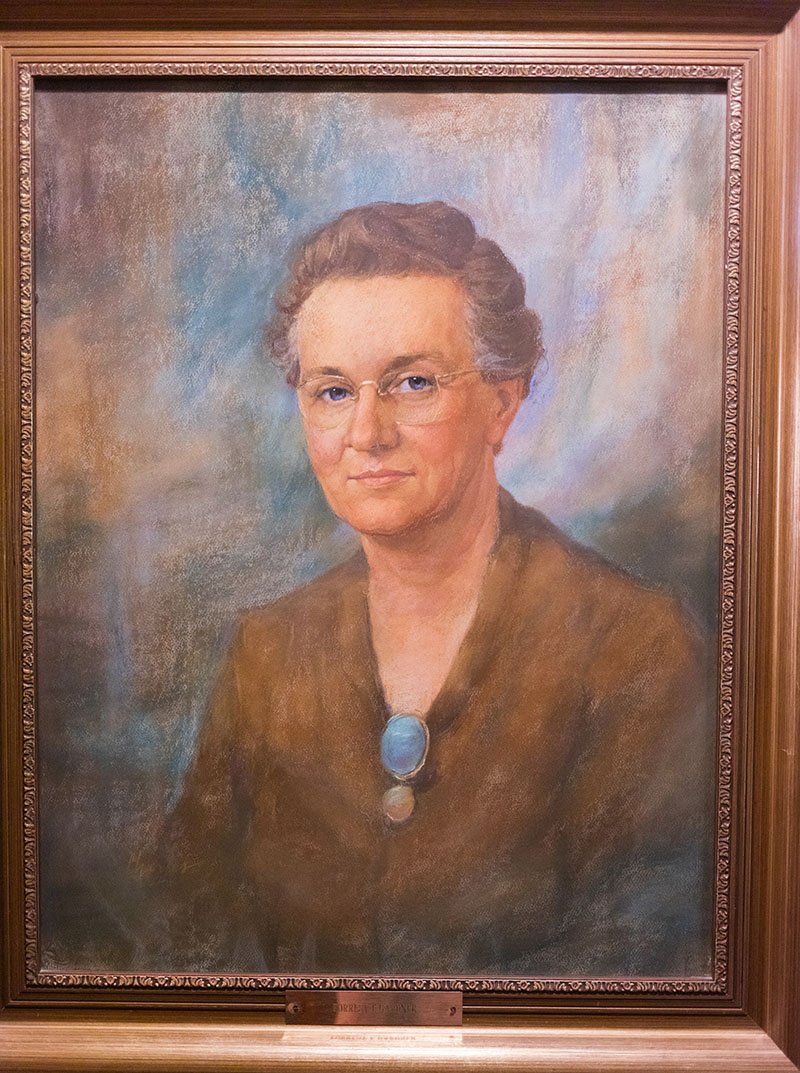 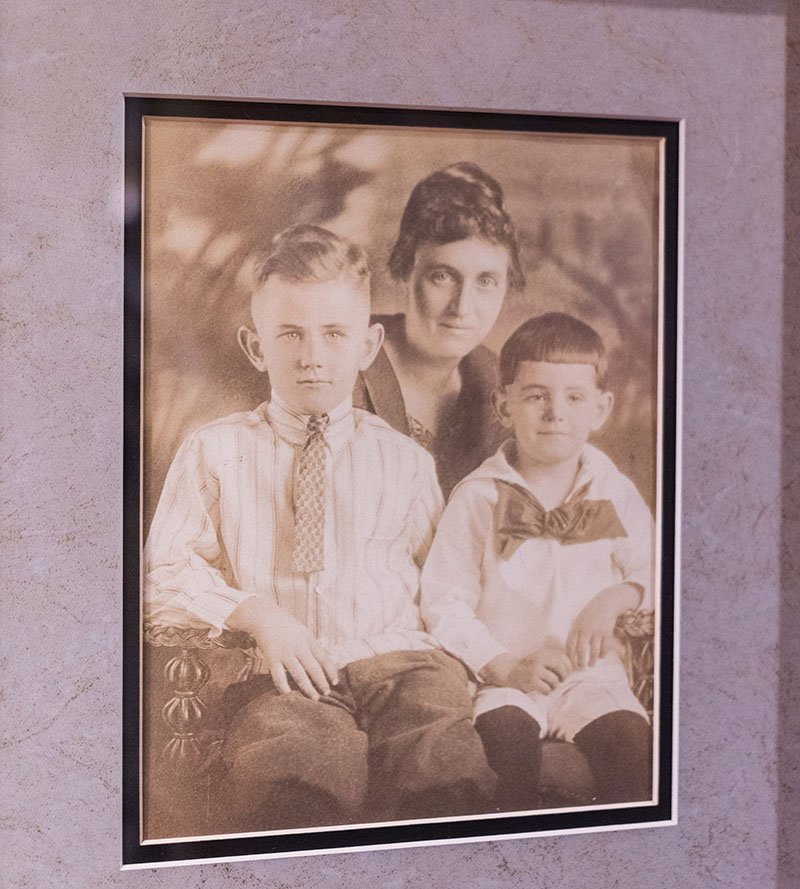 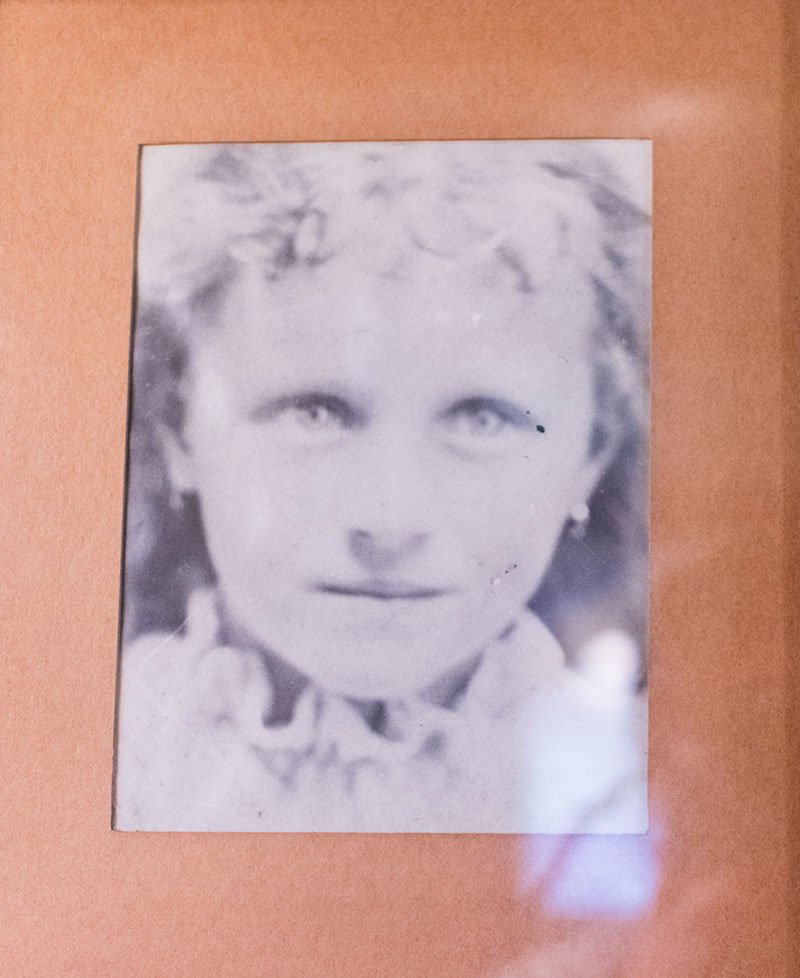 The school’s entryway houses a trophy case filled with sports team photos, awards, trophies and yearbooks. These mementos represent just a small sample of the memories many local students and faculty have of their time spent in the Gardner building.

B. J. Dunn was the Band Director from 1955-60. The band had 38 members when he started and 100 when he left. He coordinated with the parents, some who were luckily truck drivers, who volunteered to drive buses to ballgames and marching band contests out of town. “We had a very active Band Booster Club, that would help raise money to buy what was needed.” He worked at the school when Mrs. Gardner was Principal of the Junior High and said, “She was very professional, very well-liked by all of her teachers. She was a stern disciplinarian and expected students to behave. You were supposed to go to school and learn. She had regular meetings with the teachers and knew them well. She was greatly respected.”

Band Director H. L. Shepherd worked for Mrs. Gardner for one year, 1960-61. That was the year she retired. “Mrs. Gardner was a strong school person. The kids came first, what you taught came second. She was straight-laced, with no foolishness. Her philosophy was to know your stuff, know who you’re stuffing, and then stuff it.” He remembers that the band room was a wooden structure that was a former World War II building, which sat by the cafeteria behind the Jr. High building.

At the end of my junior year, there was talk of shutting down the school due to a lack of funds. The local businessmen were solicited for money to finish out the semester on schedule. It was a real concern. Once Arkansas Nuclear One came in, tax money flowed into Pope County and it was shared with the county, city, library, and public schools. This was also the first year of integration. It happened without incident of any kind. Everyone got along.”

When Renee Delone was at Gardner she loved science. “In the eighth grade, I signed up to be a Lab Assistant. I spent my time in the stock room and mixed all the compounds for the entire science department. I had one hour a day to myself. I’d check to see what was running low and restock. I learned that if you walked down the hall like you knew what you were doing, nobody bothered you.” Her father was an art teacher at Arkansas Tech and some of her art teachers were her father’s students. “I remember Bailey Field out back because when I first moved to Russellville we lived in Mr. Bailey’s house. When my son attended 25 years later, some of my teachers were still there!”

In 1974, Becky Ritchie accepted a teaching position at Gardner Junior High. “I taught science for three years and then was assigned guidance counselor for the next ten years. I had the pleasure of working with quality administrators and fellow counselors.” Ms. Ritchie was also a student at Russellville High School at that location from 1964-67. She remembers, “Our RHS Band of Distinction, led by H.L. Shepherd, had 68 members. For marching practice, our band would march in formation while playing parade marches, and weave throughout the neighborhood close to the band room. People would come out on their porches and clap as we proudly marched by. Our prom featured a live band, “the Reknown,” featuring guitars, organ, and a drum and bass section. I served as National Junior Honor Society co-sponsor for ten years.”

During Ritchie’s time as co-sponsor, the Honor Society had a campaign to help students fight the use of drugs. Using community funds they produced a video that the Honor Society students appeared in and produced. They also had a joint project with the Russellville Board of Education to purchase a marquee sign to inform the public of upcoming school events.

Mrs. Gardner’s grandson, Steve Gardner, is now a local attorney. He remembers when he fell behind in Latin, and was sent to his grandmother for tutelage. Latin and English were the two subjects she taught before becoming principal. Although retired by then, she was still a stern teacher, he said. Her grandson still lives in the family home here in Russellville. Portraits of his family grace the top of his staircase wall, with one portrait of his grandmother which hung in the Junior High for years. 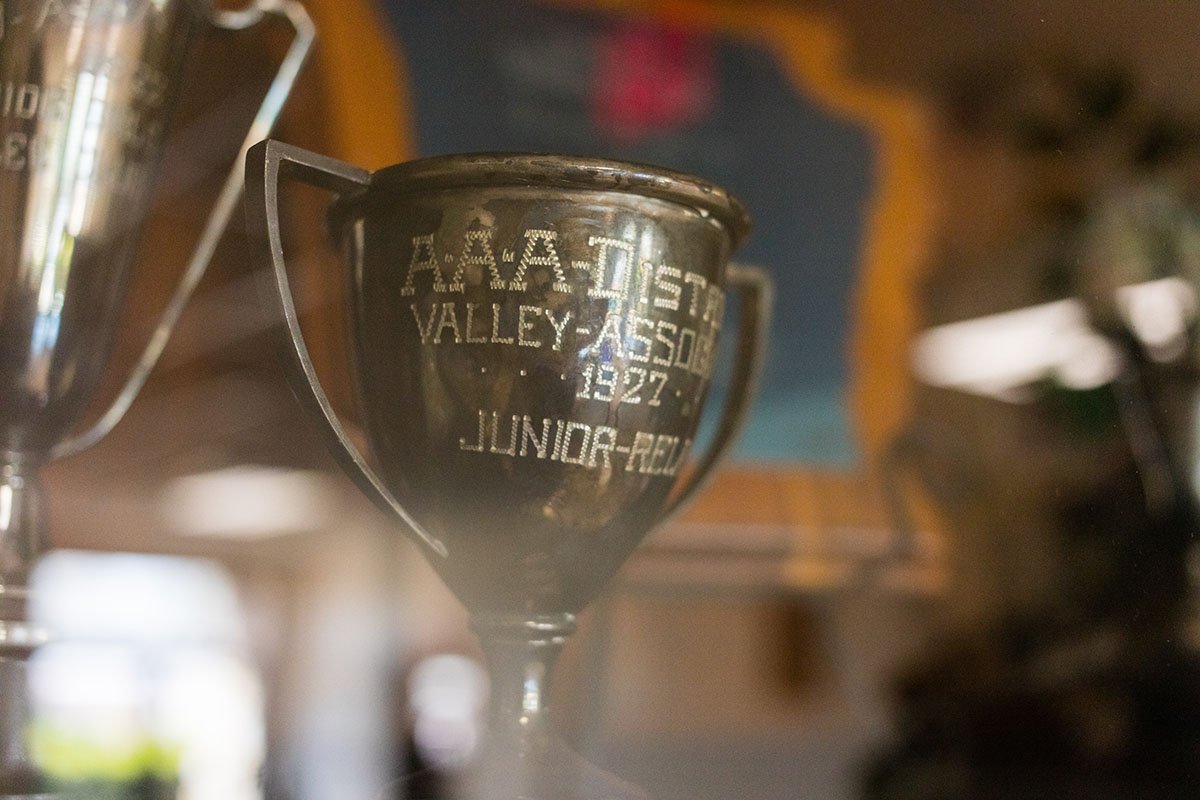 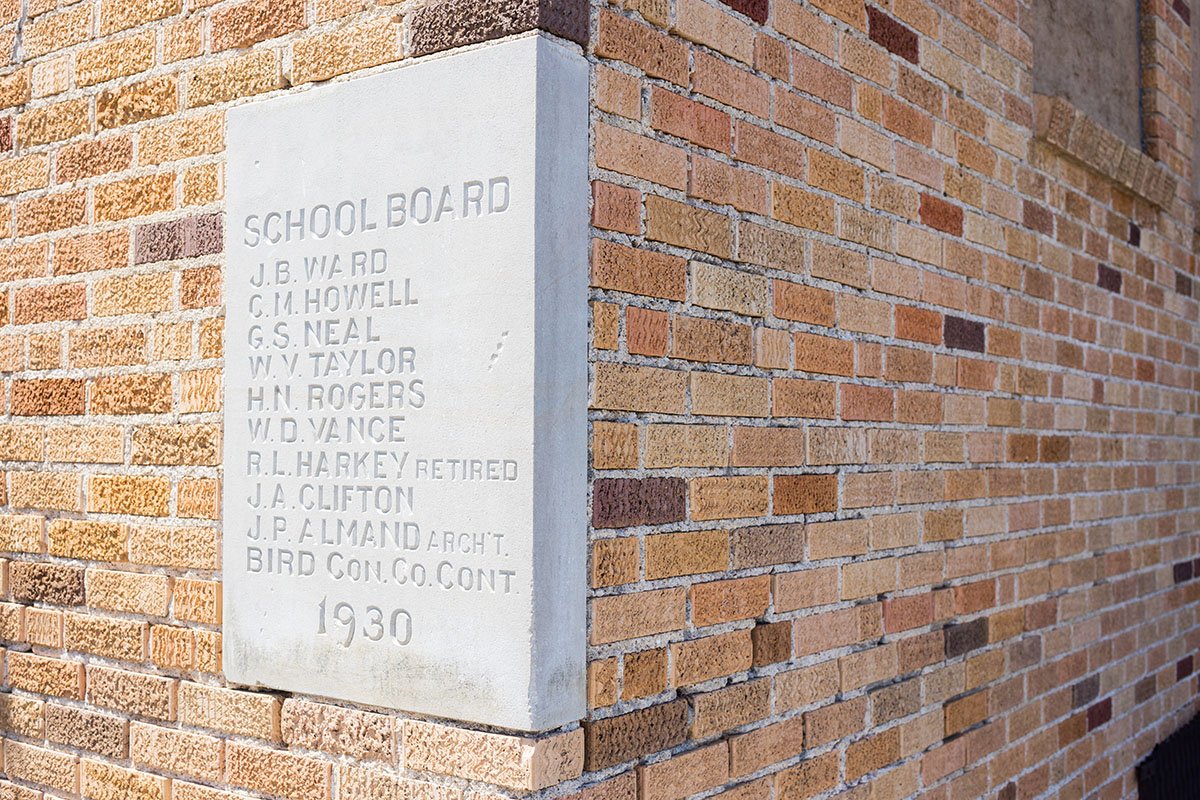 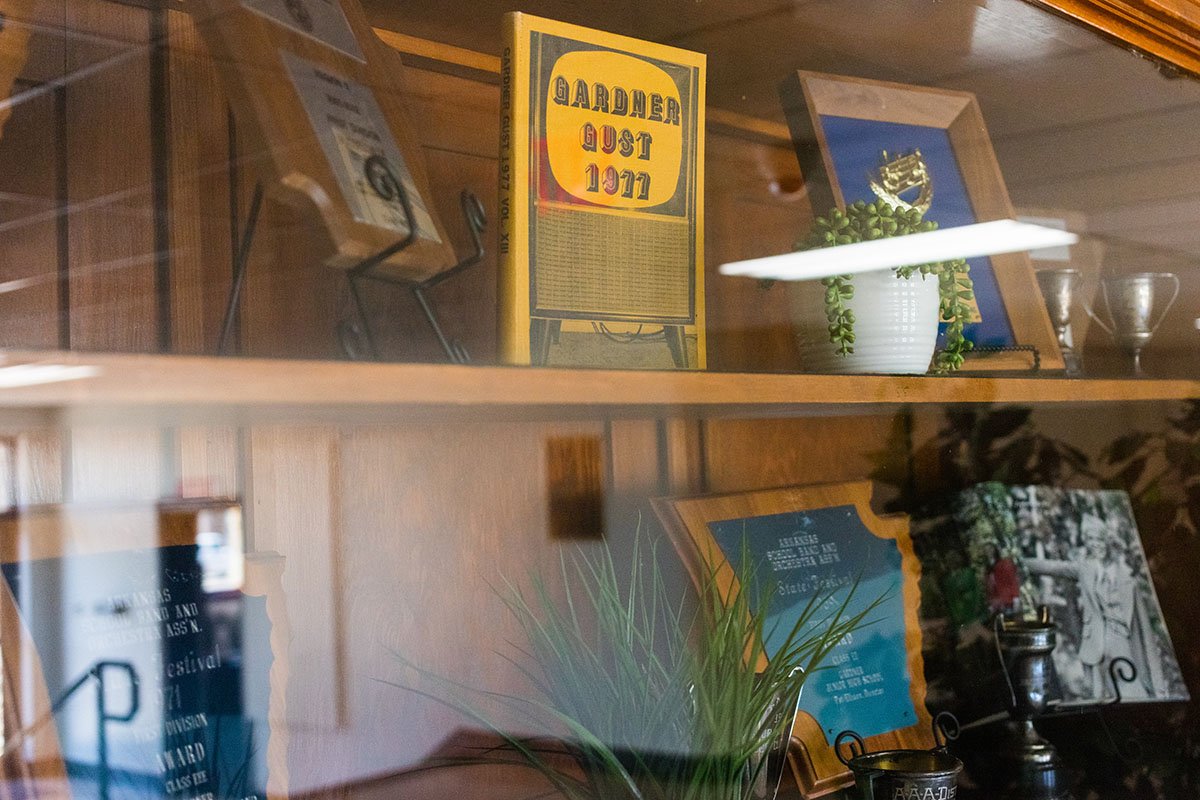 The 81-year-old building is still in use as the Gardner Campus. Its dual purpose is as both the Secondary Learning Center on the first floor and the Adult Education Center on the second floor.

Josh Edgin, Principal of the Secondary Learning Center stated that “we serve 9-12 grades for at-risk youth. We teach all subjects and the students graduate at Russellville High School. Our mission is to educate, model, and support every student every day through positive relationships to prepare them for future success.”

The Director of the Adult Education Center, Alan Nolan stated their mission: “By recognizing the diversity of needs of our students we are committed to the development of each individual as a successful, responsible, and productive citizen who is prepared for the challenges of the future.” At the center, students can earn an Employment Workplace Certificate in several areas, and classes are taught at no charge.